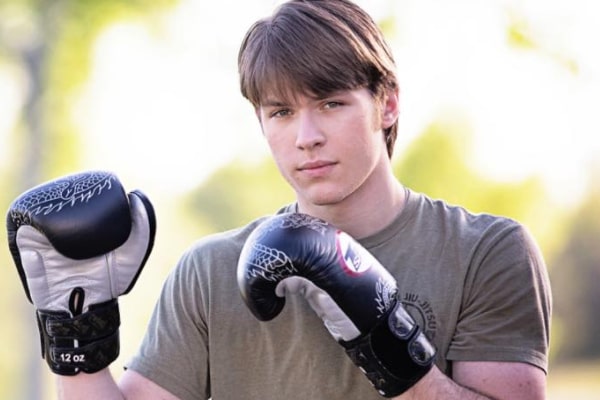 Dakota Alan Norris is the son of one of Hollywood’s biggest action stars, Chuck Norris, and is part of a huge family. The 81-year-old is an American actor, film producer, screenwriter, martial artist, and a former air policeman for the U.S. Air Force.

As for his son, who is 19-years-old and is very within, despite being in his final teenage year, Dakota is very secretive regarding his overall lifestyle. So much so, he doesn’t even use any social media.

Below let’s dig up details on Chuck Norris’ son Dakota Alan Norris and get to know him.

Old man Chuck, born as Carlos Ray Norris, is an action icon widely known for his movies starring alongside Bruce Lee. Way of the Dragon, Forced Vengeance, Lone Wolf McQuade, Missing in Action, Code of Silence, The Delta Force, and Top Dog are some of his notable movies.

Aside from his Hollywood impact, Dakota’s father is also a decorated mixed martial artist. The former Air Force member is a black belt in Brazilian jiu-jitsu, judo, and Tang Soo Do. He has also won multiple tournaments and championships, making him a respected MMA talent.

Hi Friends! I’m so excited to celebrate my birthday with you today! In honor of my special day, I have teamed up with @GoldcoPM to offer you my FREE Special Report & Newsletter that explains one of the best ways I protect my money! https://t.co/VR3yO8ThF5 pic.twitter.com/sJtcdGxcQ6

The 81-year-old would later introduce his own discipline, “American Tang Soo Do,” which was previously known as Chun Kuk Do. The art includes codes of honor and rules to live by.

Furthermore, it has a huge following in America, and every summer, the United Fighting Arts Federation holds a championship tournament in Las Vegas, Nevada.

His Mother Was A Former Model

Both Dakota’s parents are somewhat celebrity figures as his mother, Gena O’Kelley, was a former American model. Marrying the Delta Force actor on the 28th of November, 1998, O’Kelley became popular as Chuck Norris’ second wife.

She would start her modeling career straight after graduating from high school as a fashion agent saw her on the streets. According to Answers Africa, Dakota’s mother was previously married to Gordon Hinschberger and had two children, a daughter called Kelley and a son named Tim.

She has a 23 years age gap with her significant other, whom she met for the first time at a restaurant in Dallas, Texas.

Despite her husband previously married with his high school sweetheart Dianne Holechek, the couple enjoys life together.

Has A Twin Sister

Chuck Norris’ son Dakota Alan Norris is not his only child with Gena O’Kelley. Danilee Kelly Norris is Dakota’s twin sister and has inherited their mother’s family name.

Like her twin brother, the 19-year-old is also very discreet as she is not present on social media platforms. Other than that, we can only assume her interests judging by the pictures uploaded by her parents.

Danilee is into singing as she has taken part in a couple of talent shows. She also plays the guitar and is one of her biggest hobbies since she had an entire photoshoot session.

Likewise, she is also into karate and takes part in katas alongside her twin brother.

As mentioned above, the Norris household is home to a lot of talented individuals. Excluding his twin sister, Dakota Alan Norris has a total of 5 half-siblings, and most of them are already married.

America’s face of karate’s previous marriage with Holechek blessed him with two sons i.e., Mike Norris and Eric Norris. He also had an extramarital affair during his first marriage, which as a result, saw the birth of Dina DeCiolli.

Dina is Chuck Norris’ first daughter and would only reveal herself at the age of 26. Aside from Chuck, as mentioned above, Gena also had two kids from her previous marriage.

Making it, in total, 5 half-siblings for both Dakota Alan Norris and Danilee Kelly Norris.

Following in his father’s footstep, Dakota Alan Norris is a 3rd-degree black belt in MMA. Training at the Total Gym Fitness Center from the age of 13, Dakota has become well-versed in the skills department alongside his father.

With martial arts, Chuck Norris’ son Dakota is also into gymnastics. With such skills, the 19-year-old has a future action star written all over him.

Unlike the Top Dog’s actor other sons, Mike and Eric, Dakota has really upped his game by training in martial arts from an early age.

The 3rd degree MMA black belt is very new to YouTube as he uploaded his first video in October of 2020.

He doesn’t upload often but has content related to Chuck Norris’s martial arts and karate. Most of his videos are centered around his father, and he has a subscription of 61.

With all that said, Chuck Norris’ son Dakota Alan Norris is living life away from mainstream media attention. He is happy with how things are and already looks like a future action star in the making.

As he recently made a YouTube channel, we wish to see him be more active on other social media platforms. Nevertheless, we wish Dakota the very best for the future and the well-being of his family.

The name Dakota is a unisexual name of Native American origin with the meaning friend.