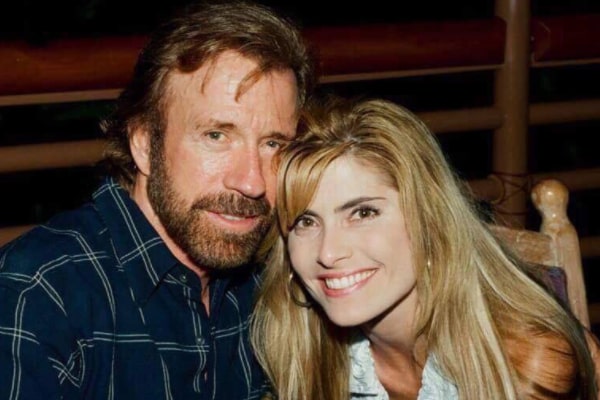 Gena O’Kelley is an American personality born on the 10th of August in 1963 in California. She is also the wife of Chuck Norris, Hollywood’s action legend.

Furthermore, she gained attention by becoming the mixed martial artist’s wife. Gena is a star of her own and has had an accomplished career. The 57-year-old started her career at an early age despite knowing no one in the showbiz industry.

Below, we have mentioned 7 interesting facts about Chuck Norris’ wife, Gena O’Kelley, through which one can know her better.

Gena O’Kelley had her big break as a model at a very early age. The California-born was just done with her high school when a fashion agent spotted her on the streets.

The natural blondie began her modeling career in the ’70s, but details regarding her professional career before meeting the Delta Force actor are kept under the veil.

Looking at O’Kelley in her prime, the American beauty surely had tons of fan following and modeling offers. Chuck Norris’s wife has maintained a very healthy physique throughout the years despite being in her late 50s.

The mother of four would later transition into a supermodel by competing with super divas like Beverly Johnson, Gia Carangi, Janice Dickinson, and Jerry Hall, to name a few.

Was Married Previously And Has Two Kids

Before tying her marital knots with Chuck Norris in 1988, Gena O’Kelley was reportedly married to Gordon Hinschberger and had two kids with her ex-partner.

There are minimal details regarding the super model’s previous marriage. Well, as for her two kids, Kelley Tagudin and Tim Gene share a loving bond with their mother.

Gena’s daughter is already married and is a mother of two, making her a grandmother. Gena O’Kelley’s kids from her previous marriage even travel and spend time together.

On the other hand, Gena O’Kelley’s husband was previously married to his high school sweetheart Dianne Holechek. He had two sons, Mike Norris & Eric Norris, with her.

Has Twins With Chuck Norris

Chuck Norris’ wife Gena O’Kelley blessed him with twin babies, a son, and a daughter. Dakota Alan Norris and Danilee Kelly Norris were born on August 30, 2000, and are in their twilight teenage years.

The twins share similar looks with their mother and have also followed in their father’s footsteps. Gena’s son Dakota is a 3rd-degree black belt in MMA, and her daughter Danilee, a 2nd-degree. Despite having famous personalities as parents, the twins are not active on social media platforms and keep things within.

Furthermore, Gena’s son Dakota recently started a YouTube channel that focuses on MMA centered around the founder of Chun Kuk Do.

Chuck Norris’ wife Gena O’Kelley was diagnosed with rheumatoid arthritis in 2013. The model who plans to celebrate over 2 decades of married life with her significant other suffered from pain in her nerves.

After better quality scans, the mother of four was injected with gadolinium, a chemical element. As a result, her body was burning with pain, as if someone had poured acid all over her.

In continuation with the above paragraph, doctors refused to believe that Gena was suffering from gadolinium toxicity. A clinic in Nevada would later solve the problem.

The Way of the Dragon actor even commented: –

“I’ve given up my film career to concentrate on my wife, my whole life right now is about keeping her alive. I believe this issue is so important and will be sorted.”

After 5 years of the recovery process, the couple would sue the medical companies for over $10 Million as damage cost.

The use of gadolinium injection during her treatment caused Gena to suffer from gadolinium deposition disease. The couple took 3 gadolinium-based contrasts off the market despite having less evidence to prove their claims.

Part Of The Total Gym Commercials

Gena O’Kelley’s husband, Chuck Norris, has been endorsed by Total Gym for over 30 years. The 81-year-old actor keeps himself in shape regardless of his age.

The former U.S. Airforce member has appeared on the fitness product manufacturing company’s commercial for decades now. Along with his wife, he was the face of home fitness as they would appear together.

My friends at Total Gym are running an incredible deal on the top of the line Total Gym FIT Max at QVC today. Deals like this don’t come around very often, so treat yourself to the gift of better health in 2021. https://t.co/ZJK3NFnp0D pic.twitter.com/xBN1mLOGRU

Nowadays, the Lonewolf McQuade actor promotes Total Gym with his 19-year-old son, who is not only a 3rd-degree MMA fighter but also a gymnast.

Apart from modeling, the 57-year-old has also appeared in several TV shows, as a host mostly. Gena never had a huge big screen impact like her husband, who has starred in hits like Good Guys Wear Black, A Force of One, Forced Vengeance, Lone Wolf McQuade, and many more.

Nonetheless, Gena O’Kelley is living happily and healthily with her family. We wish the best to her for the days to come and her overall well-being.