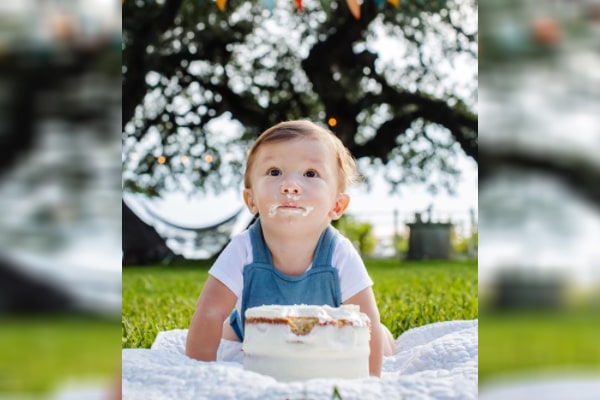 Joanna Gaines is famous as the renovation guru. She has been flipping, remodeling, and fixing homes for several years. She has worked on several homes along with her husband, Chip Gaines. Combining Chip’s interest in real estate and Joanna’s unique eye for design birthed numerously uniquely designed places.

Besides their partnership in business, they are a parent to five adorable kids, including Crew Gaines. Here is everything you need to know about the little gem, Crew.

The Youngest In The Family

It is always an emotional rollercoaster to witness a toddler grow. Therefore, it looks like the Gaines couple is not ready to give up on the excitement of raising kids as they welcomed the youngest member in the family, a baby boy, Crew Gaines, in 2018.

The two-year toddler is as adorable as a button and built outstanding bonds with his parents and siblings. That being said, he has four older siblings with whom Joanna Gaines’ son, Crew enjoys playing on their farm.

And then there were 5.. The Gaines crew is now 1 stronger! 10 beautiful toes and 10 beautiful fingers all accounted for, and big momma is doing great! #blessedBeyondBelief

Furthermore, Joanna Gaines welcomed her first kid, Drake Gaines, in 2005. Likewise, Crew’s second oldest sibling, Ella Rose Gaines, was born in 2006, while the Gaines couple welcomed their third, Duke Gaines in 2008. By the time they held their fourth kid, Emmie Kay Gaines, in 2010, they already knew that there was another on its way.

Although it took eight years to welcome their fifth baby, Crew, he came two and a half weeks earlier. Mama Gaines talked about how crazy time gets, and by the time babies hit the ground, it’s almost like parents knew he is coming to warm hearts.

The family of seven is incredibly happy and looking forward to a bright future.

Joanna Gaines Is A Working Mother

Aforementioned, Jonna Gaines’ son, Crew, surprised everyone with his speedy entry two and a half-weeks earlier in June 2018. But, he was delivered healthy, and the news was spread all over via social media. Crew Gaines’ father announced his arrival via twitter while Joanna gave an elaborative welcome caption.

As a mother of five, Chip Gaines’ wife always tried to balance work and family. However, she feels guilty about merging her family and work. Furthermore, she admits that balancing family and work is ‘too meticulous a science to bring two together,’ but she is all about it.

Joanna further admitted that her son, Crew required more of a watchful eye as he began walking. She talked about having Crew at the store/work as he’s older. She further compared the time when her youngest one was in her arms, sleeping most of the time and a tot wandering around knocking over items.

Despite all the challenges, Joanna loves her co-worker at her shop as she goes on a nostalgic trip.

Breaks The Internet Every Now And Then

Well, having kids is fascinating and always a fun experience. Their ‘first-time’ excites parents and other members and, in today’s context, the Internet.

Similar is the case with Joanna Gaines’ adorable tot, Crew Gaines. Both the Gaines couple enjoy sharing Crew’s videos on social media, and he becomes an internet sensation now and then.

Some occasions where Crew became the star of the Internet was when he played with his new puppy. Similarly, Joanna Gaines’ son also uwu-ed people when he tried to resist eating stones.

Furthermore, cute-o-meter went off the chart as he devoted his birthday cake, leaving his tiny teeth marks. Well, it’s bold of Gaines’s parents to let their kid have all the fun and melt the Internet’s heart.

Similarly, Joanna Gaines and Chip Gaines’ son, Crew, waved at the crowd when he ran a marathon with his father. Must have ticked many pregnant bellies with chubby-little hands. Moreover, Crew’s passport picture-day was hilarious too. Thus, Joanna Gaines’ son will have great memories as he grows old.

Let’s hope the born-star grows up to make something on his own.

Parents Are Married Since 2003

It looks like a couple needs to run a business together to taste the longevity of their relationship. Well, there are plenty of couples to prove that, including Kate Albrecht, aka Mr. Kate and Joey Zehr, and Joanna and Chip Gaines themselves.

Crew Gaines’ parents met after they graduated from Baylor University and worked on projects together. Their chemistry was undeniable since the start and hence married shortly after on 31 May 2003. Since their wedding, they welcomed five children, built a Magnolia store, and started their show called ‘Fixer Upper.’

They are still building a family, balancing between kids, and work, including a real estate company, design firm, etc. Besides having great work ethics, they still love one another immensely. Furthermore, another baby could be on their way as they are not done with raising kids as it is always an exciting journey.

Let’s hope baby Crew Gaines grows well and accustomed to the family business and build a name for himself.

The name Crew is of Latin origin, which means chariot.