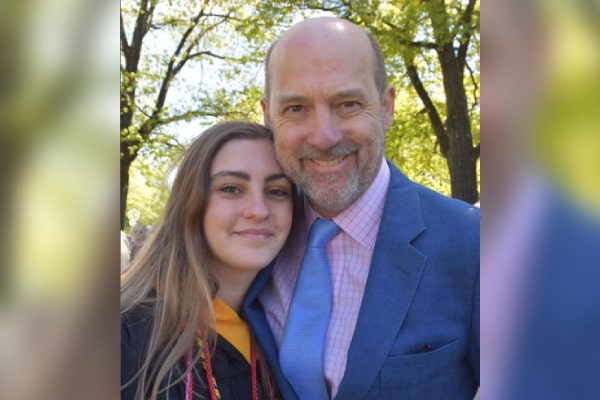 Anthony Edwards is a renowned actor and director of American nationality. He is best known for his TV series, including ER, Top Gun, Zodiac, Miracle Mile, Revenge of the Nerds, etc. During his five decades of a flourishing career, the actor has accumulated enormous fame and fortune.

Talking about the Califonia native’s personal life, he shares a blissful marital life with Mare Winningham since 2021. Previously, he was married to the beauty industry veteran Jeanine Lobell. The former couple was married from 1994 to 2015. In addition, the former pair also welcomed four lovely kids together. Thus, in today’s article, let’s get to know Anthony Edwards’ daughter, Esme Edwards, in detail.

Is The Eldest Daughter

Born on 29 January 1997, Esme is the eldest daughter of her dad and mom. Before welcoming her, Esme Edwards’ parents gave birth to her elder brother Bailey Edwards on 1 June 1994. Moreover, Wallis Edwards and Poppy Edwards are her younger siblings who were born on 1 September 2000 and 15 March 2002, respectively.

Furthermore, Esme’s little sister, Wallis has a similar facial structure to hers. Congratulating the latter on graduation, Esme said she is proud of her, who grew up to be her twin. Wallis graduated from The Dalton School in June 2019.

Likewise, Anthony Edwards’ son, Bailey, also received his bachelor’s degree from Williams College in June 2016. Moreover, the Edward siblings seem to share a close bond. They often appear in each other’s photos on their respective IG feed. Not only that, but the bunch doesn’t forget to wish happy birthdays to each other. Let’s hope their bond will grow stronger in the coming days.

Jeanine Lobell’s little girl graduated from Skidmore College in May 2019 and received her degree in Bachelor of Science in Social work. In addition, she was active in various clubs and societies during her college days. For instance, the ER star’s daughter was involved in Bare and RestoreMore clubs. The lovely lady was also involved in organizations like the Centre for Leadership in Teaching and Learning and the Speakers Bureau Chair.

Not only that, but the beautiful girl made it to the Dean’s List with her excellent performances.

Anthony Edwards’ daughter is pursuing her master’s degree in clinical psychology from Antioch University in Los Angeles. She is a student of the class of 2023 of the university.

Having earned social work degree, Esme is an executive director at Feed The Streets, a non-profit organization based in Los Angeles. The Foundation collects donated food, hygiene products, clothing, and educational items for hand-to-hand distribution. The famous director’s baby girl served as a director of operations at the same organization from July 2020 to June 2021.

Additionally, Jeanine Lobell’s daughter worked as Behavioral Therapist at Institute for Effective Behavioral Interventions from August 2019 to July 2020. Plus, she has interned at several foundations, including Into The Gloss, Office of Senator Chuk Schumer, Saratoga Mentoring Program, Baywood Center Inc, etc.

As per her Instagram, Esme is dating a guy named Ben Baumann. While it remains a mystery about when the love birds got together but they shared their first picture together in November 2018. The actor’s daughter seems to be head over heels for the guy. Moreover, sharing a lovely picture, the director’s baby girl said Ben is her dancing partner in crime with a little red heart emoji.

Additionally, Esme Edwards’ boyfriend is into music. His Instagram bio link leads to the Spotify account called Komodos. It is a five-piece alternative rock band from Brooklyn, NY. Some of the top songs are 30 Faces and Between Lines.

Nonetheless, Anthony Edwards’ daughter seems to be doing well in her personal and professional life. In addition, the beautiful lady is in love. We wish Esme Edwards the best for the future.

Esme is a unique name of Old French origin that means Beloved or Esteemed.