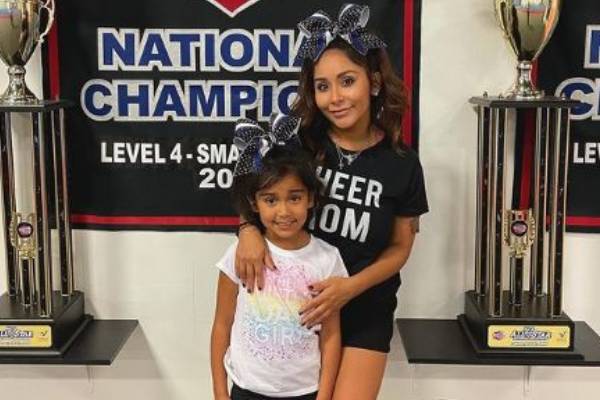 Nicole Polizzi, aka Snooki, the famous cast member of Jersey Shore, has gained immense fame and fortune in her career. The gorgeous celebrity is also the doting mother of three kids, a daughter, and two sons, whom she shares with her husband of eight years.

In this article, let’s learn in detail about Nicole Polizzi’s daughter and how she is growing up.

As mentioned earlier, the Jersey Shore star Nicole Polizzi has been married to Jionni LaValle for eight years. The love birds have been inseparable and have welcomed three kids together. Nicole Polizzi’s daughter, Giovanna Marie LaValle, is her middle child with her husband, whom they welcomed on September 26, 2014.

Nicole shared the news of the arrival of her baby girl via Twitter. As mentioned earlier, Giovanna is not the only child of her parents. She has two brothers. Giovanna’s parents gave birth to her elder brother, Lorenzo Dominic LaValle, on August 26, 2012.

Similarly, Giovanna’s younger brother, Angelo James LaValle, was born on May 30, 2019. She loves both of her siblings and seems to be having the best times growing up together with them.

Was Born Before Her Parents’ Marriage

As mentioned earlier, Giovanna is the second child of Nicole Polizzi and her husband, Jionni LaValle. She was born before her dad and mom got married. Her parents first met at Karma in Seaside Heights. Giovanna’s parents dated for a year and a half before getting engaged in March 2012.

Two years later, on November 29, 2014, Giovanna’s mom and dad walked down the aisle at St. Rose of Lima, a Catholic church in East Hanover, New Jersey. Her mom shared the news of their marriage via Twitter. Their reception was held at The Venetian banquet hall in nearby Garfield.

As stated earlier, Giovanna was born two months before her parents tied their marital knot. Nevertheless, Giovanna’s dad and mom’s marriage is going strong, and they love each other deeply.

Has A YouTube Channel And A Social Media Star

Nicole Polizzi’s daughter, Giovanna Marie LaValle also has a YouTube channel. The channel, named Sissy’s Playhouse, has 8.73K subscribers. Her first ever video on the channel was premiered on February 7, 2019. She has seven videos on her channel altogether, and those videos have good views.

Furthermore, Nicole’s baby girl already has over 300K followers on her Instagram, which is named sissygiovanna. As per the description, her Instagram account is run by MAWMA. She might have gained such huge followers because of the popularity that she has gained as Nicole Polizzi’s baby girl.

Snooki’s Daughter Is A Cheerleader

Going through her Instagram, we can see that Giovanna has uploaded several photos and videos of her with her cheerleading crew. She is a member of CJA 2020-2021 at Central Jersey All-Stars. Giovanna has participated in several camps and events as a cheerleader. She is currently in 1st grade, while her older brother is in 3rd grade.

Furthermore, Snooki’s daughter also uploads several photos of her doing stretching and several gymnastics. Looking at her posts, it seems like she is interested in gymnastics. Who knows, she might even pursue a future in the gymnastics field and might become a successful gymnast one day.

Nevertheless, we hope that she achieves success in whatever path she chooses in the coming days. Thus, we hope that Nicole Polizzi’s baby girl, Giovanna Marie LaValle has a great future ahead.