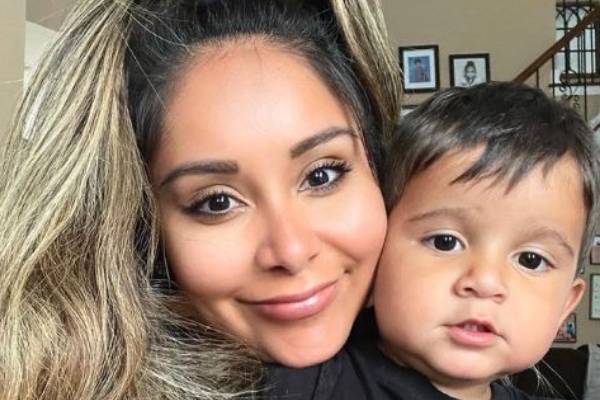 Nicole Polizzi, aka Snooki, is a popular television personality from America and is a doting mother of three beautiful kids. She and her beau have been married for eight years now, and the pair’s marriage is still going strong.

Among her three children, let’s learn in more detail about one of Nicole Polizzi’s sons, Angelo, and how he is growing up.

Is The Youngest Child Of His Parents

As mentioned earlier, Nicole Polizzi is the doting mother of three beautiful children, whom she shares with her husband of eight years, Jionni LaValle. She and her husband reside in New Jersey, with their three kids, a beautiful daughter, and two handsome sons.

Nicole Polizzi’s youngest child or second son is Angelo James LaValle. In November 2018, Snooki announced her pregnancy via Instagram, where she uploaded a black and white picture of her son and daughter holding the ultrasound of her upcoming third baby.

Nicole let her fans know the name of her third child by showing off the personalized piggy bank, security blanket, and a fleece throw blanket, which had the name “Angelo” printed on them. Finally, on May 30, 2019, she gave birth to her baby boy, Angelo James LaValle. Snooki’s son weighed 7 lbs., 8 oz, at the time of birth.

Angelo James LaValle’s mom shared the news of his arrival via Instagram. Several fans and colleagues congratulated her for being the mother for the third time.

As mentioned earlier, Nicole Polizzi’s son, Angelo James, is not her only child. He has an older brother and sister. Angelo’s elder brother, Lorenzo Dominic LaValle, had arrived seven years before him on August 26, 2012. He is in third grade and seems to be a huge fan of WWE.

Furthermore, Angelo’s elder sister, Giovanna Marie LaValle, arrived five years before him on September 26, 2014. She is currently in 1st grade and is a cheerleader. She cheerleads as a member of CJA 2020-2021 at CJA Stars, aka Central Jersey All-Stars. Furthermore, his sister also has a YouTube channel named Sissy’s Playhouse and an Instagram with over 300K followers.

Just by the pictures alone, we can see that Angelo loves his siblings, and they also take care of him and love him immensely.

His Parents Got Married After The Birth Of His Siblings

As stated earlier, Angelo James LaValle is the youngest child of Nicole Polizzi and Jionni Lavalle. They got married after the birth of Angelo’s elder siblings. Angelo’s dad and mom first met at Karma in Seaside Heights, where they were partying. Then, they got into a relationship for a year and a half and got engaged in March 2012.

On November 29, 2014, Angelo’s father and mother tied the knot in East Hanover, New Jersey at St. Rose of Lima, a Catholic church. His mama shared the news of their wedding on her Twitter handle. As mentioned earlier, their marriage is going strong, and the duo is deeply in love with each other.

As the youngest one in the family, Angelo must be immensely pampered by his parents and siblings. The baby boy seems to be having a great time while growing up with his older siblings. Nevertheless, we hope that he has a great future.

The name Angelo has an Italian origin, which means Messenger Of God. Similarly, the name James, which means Supplanter has a Hebrew origin.