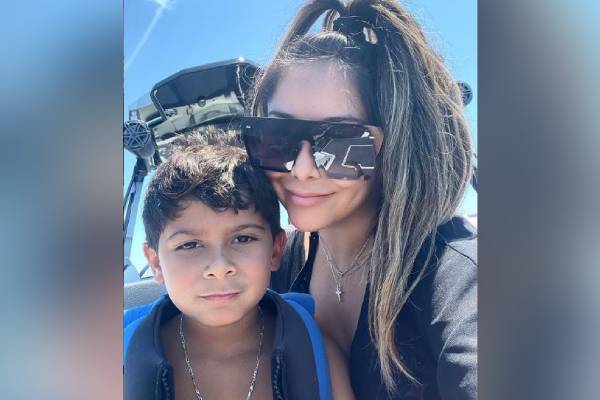 Nicole Polizzi, aka Snooki, is a television personality from the USA who came into prominence from the MTV reality show Jersey Shore. She has earned a considerable fortune and popularity due to her career in the entertainment industry.

Through her work in different television series, Snooki has a massive fanbase worldwide who love her and are curious to learn about her personal life. Here, let’s know in detail about Nicole Polizzi aka Snooki’s son, Lorenzo Dominic LaValle, and see how he is growing up.

Is The First Child Of Nicole Polizzi

Nicole Polizzi, also known as Nicole Elizabeth LaValle, shares a blissful marital life with Jionni LaValle, with whom she tied the knot on November 29, 2014. Since then, the couple’s marriage has been going strong, and they are deeply in love with each other.

The married duo is the doting parents of three kids, two sons and a daughter. Lorenzo Dominic LaValle is their eldest child, born on August 26, 2012, almost two years before his parents’ marriage. Snooki shared the news of her pregnancy exclusively with Us Weekly in March 2012.

As mentioned earlier, Nicole Polizzi’s son, Lorenzo is not the only child of the LaValle couple. He has a younger brother and sister. Lorenzo’s sister, Giovanna Marie LaValle, was born on September 26, 2014, two months before their parents’ marriage.

Then, on May 30, 2019, Lorenzo Dominic LaValle’s mom gave birth to his younger brother, Angelo James LaValle. Lorenzo loves both of his siblings, and they are growing up surrounded by love.

As mentioned earlier, Lorenzo’s mom found fame from the shows like Jersey Shore, Jersey Shore: Family Vacation, and Snooki & Jwoww. While talking to Us Weekly, Nicole mentioned that her son, Lorenzo is on YouTube a lot as he watches WWE and other shows. And sometimes, he watches her show and goes crazy.

In the interview, Nicole added that Lorenzo didn’t really judge her but instead said she was a mess and embarrassing. However, the reality star said that Lorenzo does not hold it against her but would never follow in Snooki’s footsteps.

Furthermore, Snooki’s son, Lorenzo, does not like to be in front of a camera and often asks his mom to not take his picture.

In addition, Nicole also stated that she had not told the truth to her children regarding the show. She has convinced that whatever she did on the show was not real and that she was an actress. Snooki also said that she would share the truth with Lorenzo and his siblings when they are 16 or 17, as they would get it at that time.

Celebrated His Ninth Birthday In A Grand Way

As of 2021, Snooki’s eldest child, Lorenzo, is nine years old and is in the 3rd grade. She posted on her Instagram, wishing him a Happy Birthday. She also shared his picture along with the other two kids, and the photo suggested that he had a grand birthday celebration.

Lorenzo’s parents grandly celebrated his birthday and treated him to an epic WWE-themed party. He also wore a t-shirt reading “The Birthday Dude.”  Furthermore, his mom and dad surprised him with a special cake that was designed to look like a wrestling ring.

Lorenzo’s dad and mom shared heartwarming posts on the occasion of his birthday. Looking at the pictures there is no doubt that Snooki’s son enjoyed his wrestling-themed party.

Nicole Polizzi’s baby boy, Lorenzo Dominic LaValle, seems to be living a great life. Nevertheless, we hope that he has a great time ahead and achieves success in the coming days.