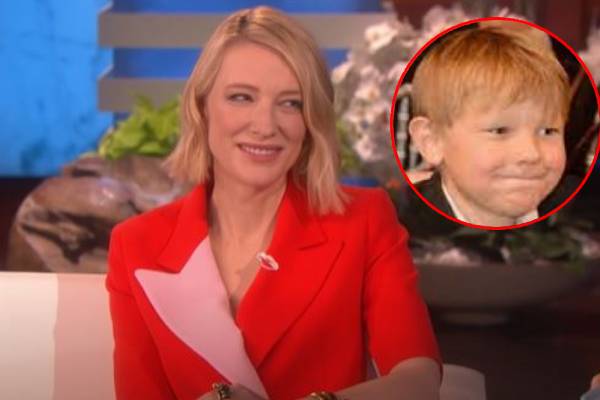 Ignatius Martin Upton has made a cameo role in the Marvel movie. Image Source: Social Media.

Considered one of the most talented actresses of her time, Catherine Elise Blanchett, also known as Cate Blanchett, is a popular name in the film industry. Having acted in several movies and series, Cate has established herself as one of the most successful personalities in Hollywood. The role of Galadriel, the leader of the elf, in the popular film series The Lord of the Rings, gave her a household name. And after that, her professional career just kept on booming.

Interestingly, Cate’s marital life is as successful as her professional life. She has been married to her husband, Andrew Upton, for many years now. Furthermore, the couple welcomed four children together whom they are raising with immense love and care. Among the four kids, three are sons, and one is a daughter.

Thus, in this article, let’s know more about Cate Blanchett’s son, Ignatius Martin Upton, and how he is growing up.

As mentioned earlier, it has been several years since the beautiful actress Cate Blanchett walked down the aisle with Andrew Upton. The couple that met in 1996 got engaged after dating for three weeks. On December 29, 1997, they tied the knot, and since then, the pair’s marriage has only grown stronger and stronger.

Over a decade later, on April 13, 2008, Cate Blanchett’s son, Ignatius Martin Upton, was born in Sydney, Australia. In November 2007, Ignatius’ mom had confirmed the pregnancy, and in February 2008, she revealed the gender of the baby.

Ignatius Martin Upton’s parents were ecstatic to welcome him. They raised him and his other siblings with immense love and care.

Cate Blanchett’s son, Ignatius, is not the only baby of the actress. Before him, she had given birth to two boys, and after him, she and Andrew adopted a baby girl. Ignatius Martin Upton’s mom, Cate, entered into motherhood for the first time after the birth of his eldest brother, Dashiell John Upton, on December 3, 2001.

Then, on April 23, 2004, Ignatius’ second brother, Roman Robert Upton, was born. As mentioned earlier, his younger sibling is a sister, whom his parents adopted. The adoption of his sister, Edith Vivian Patricia Upton, took place on March 6, 2015.

Cate’s baby boy is close with all his siblings, and they must be having a great time growing up together.

Has Already Made His Debut In The Film Industry

Celebrity kids following in their parents’ footsteps is not a new thing in the entertainment industry. Since their birth, fans and followers anticipate them to pursue a similar career as their dad and mom. Well,  little Ignatius seems to be doing the same. In 2016, he made his debut in the Hollywood industry with a cameo role in the movie Thor: Ragnarok.

In the film, Ignatius’ mom played Hela, the Asgardian goddess of death. It also starred famous actor Chris Hemsworth. The movie did great and earned a huge sum in the box office collection. However, it is not known if Ignatius will continue his journey in the acting field. Well, he still has a lot of time to figure that out.

Was Named After A Book’s Character

Giving names to one’s child is one of the most challenging tasks parents have to do. Many of them want to be unique and something meaningful in their lives. Some look out on the Internet, and some take references from movies or books. Similarly, while naming their kids, Cate and her husband did the same.

Ignatius Martin Upton’s dad and mom named his eldest brother after literary great Dashiell Hammett. Similarly, they named his other brother after iconic filmmaker Roman Polinski, and the name is also the French word for book. But, when it came to his name, they could not find a suitable name.

While talking on Jimmy Kimmel Live!, his mom revealed that she and her husband had run out of ideas to name him. The couple named him after a character from the popular children’s novel series Captain Underpants.

Furthermore, while talking on the show, Ignatius’ mom revealed that one book in the novel series written by Dav Pilkey consists of a character named Professor Pee-Pee Poopypants. That character stuck out to her when she was pregnant with Ignatius. She added that she was eight months pregnant and hallucinating, and in one of the sections of the book, everyone teased the character because of his name. As a result, he forced the world to change their names.

Ignatius’ mama further explained that they have an interior code that gave some examples of names. When you want a name from I, the example is Ignatius. Moreover, according to Oprah Daily, his nickname is Iggy. After the birth, when his mom took him home, his brothers welcomed him by putting up a sign on their window that read “Welcome home, Mum and Iggy.”

Besides Red carpet appearances, his mom and dad have kept him and his brothers away from the limelight. Nevertheless, let’s hope Cate’s kid becomes successful in the future.