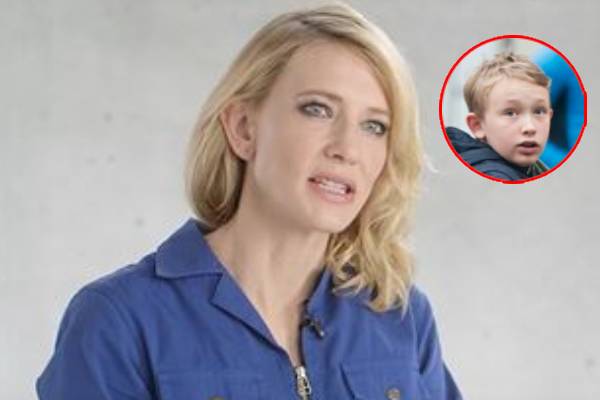 Cate Blanchett has four kids with her husband, and Dashiell John Upton is the first born. Image Source: Social Media.

Cate Blanchett is one of the most successful actresses of her time. The role that gave her worldwide prominence is Galadriel, the elf leader, in the popular film series The Lord of the Rings, based on the novels written by J. R. R. Tolkien. Apart from that, Blanchett has acted in several other movies and television series and has played many roles that have helped her gain significant fame and fortune.

Cate is one of those celebrities who prefer to keep their personal life away from the media and the limelight. Although her professional life is known to everyone, very little is known about her personal life, especially her kids. The gorgeous actress is the doting mother of four. And in this article, we will be learning in detail about Cate Blanchett’s son, Dashiell John Upton, and how he is growing up.

First-Born Of His Parents

The Hollywood actress Cate Blanchett shares a blissful marital life with Andrew Upton. It has been 24 years since the duo walked down the aisle on December 29, 1997. In over two decades of being married, Cate and Andrew became the parents of four beautiful children.

Cate Blanchett’s son, Dashiell John Upton, is her firstborn with Andrew, whom they welcomed on December 3, 2001, four years after their marriage.

The new parents, Cate and Andrew, were ecstatic to welcome their son, and they raised him with immense love and care. Furthermore, according to IMDb, they named him after Dashiell Hammet, who wrote the classic crime novel The Maltese Falcon (1930). Dashiell is reportedly Andrew’s favorite author.

Cate Blanchett’s son, Dashiell John Upton, also has a younger sister, Edith Vivian Patricia Upton. His parents had adopted her on March 6, 2015. While talking with Vogue, his mother said that Dashiell and his other brothers had welcomed their sister with open arms. Moreover, his dad and mom had wanted to adopt since his birth, and their wish was finally fulfilled.

Dashiell must have a great relationship with his three siblings, and they are undoubtedly having a wonderful time growing up together.

Cate Blanchett’s son, Dashiell John Upton, is a grownup and has completed high school. However, it has not been revealed which school he went to. In 2020, he graduated from high school and set off to attend college. His mom confessed that she was finding it difficult to cope when he was about to leave home for school.

When his mom was asked about Dashiell’s college plans, she replied, saying it was a huge event for her. She added that letting one’s child go is the most difficult thing for a parent. While talking on a podcast, she mentioned that Dashiell is attending a film school. However, Cate and Dashiell have not revealed which college he goes to. Furthermore, in one of the interviews, Cate said that one of her sons studied philosophy and physics. But she did not reveal which son.

Furthermore, talking about his relationship, it is unclear if Dashiell has found his partner yet. He has not appeared much in the media. Nevertheless, let’s hope we get to know about Dashiell John Upton’s girlfriend in the coming days.

His Mother Has Taught Him Several Things

Dashiell John Upton’s mother often talks about instilling several great things in him and his siblings. In an interview, Cate mentioned that it is a must for her to instill the importance of respecting women in her three boys. Furthermore, she also talked about how necessary it was to teach a sense of self-respect to her daughter.

Moreover, Dashiell’s mom has also taught him and his siblings to do their research when they are trying to get any information from social media. She revealed that social media has become a major discussion with them and has tried to teach them the importance of knowing the authentication of the news.

The beautiful actress seems to have taught several good lessons to her kids. They also must be following their mother’s words.

Like her, Cate Blanchett’s baby boy seems to be a private person. He rarely makes public appearances and does not have active social media accounts. Nevertheless, let’s hope we get to know more about Dashiell in the coming days.

The name Dashiell is a name derived from the French surname de Chiel, and it means Page Boy.

The middle name John has a Hebrew origin, which means God Is Gracious.