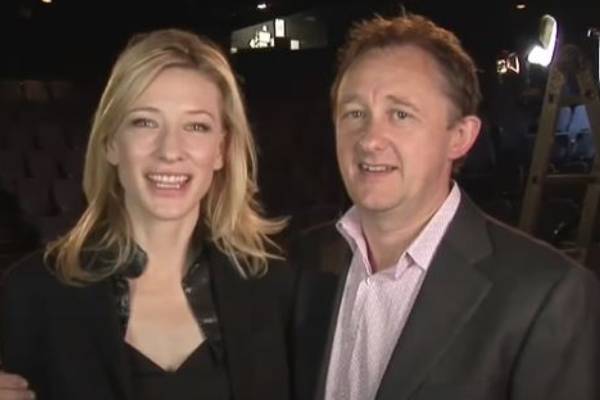 Andrew Upton and Cate Blanchett first met in 1996 and have been together since. Image Source: Social Media.

The Lord of the Rings trilogy became a massive hit and is regarded as one of the greatest and most influential film series ever made. It also became the highest-grossing film series of all time after earning $2.991 billion worldwide. The casts that starred in the film gained worldwide prominence, and their acting careers were enhanced. One actress who became a household name because of her role in the movie is Cate Blanchett.

Cate’s character in The LOTR trilogy, Galadriel, is a royal elf of both the Teleri and the Noldor and a grandchild of both King Olwë and King Finwë. Apart from the film series, she has acted in various projects that have become a huge hit, thus helping her earn immense fame and fortune.

We talked about the Australian actor’s professional life, but what does her personal life look like? Many know she has been married for several years now, but very little is known about her spouse. Thus, let’s take a look at some unknown facts about Cate Blanchett’s husband, Andrew Upton.

The famous actress Cate Blanchett shares a blissful marital life with Andrew Upton. According to Andrew, the couple first met in 1996 on an Adelaide set. But, funnily enough, Cate claimed that they met at a friend’s house, helping on a short film. She further stated that the first part of his body that she met was his bottom.

However, it was not love at first sight for the couple. While talking to Jay Leno on The Tonight Show in 2013, she admitted that she thought him arrogant. And at the same time, Andrew had thought her to be aloof.

Furthermore, during a late-night game of poker, the couple had their first kiss, which marked the beginning of their relationship. After being together for only three weeks, Andrew proposed to his then-girlfriend.

In 2015, on The Ellen DeGeneres Show, Andrew’s wife recalled the time they got engaged. She had cooked him a meal, which according to her, was the worst. But Andrew ate it and then proposed to her.

The engaged couple tied the knot on December 29, 1997. Since then, the couple has been having a wonderful time together, and their blissful marital life is still going strong.

Moreover, in an interview with The Mirror, Andrew Upton’s wife Cate revealed that he gave her a vacuum cleaner on their first marriage anniversary and then a mixer. Furthermore, he also gave her coffee makers and irons. The actress claimed it to be less romantic and timeless. Nevertheless, they are enjoying little moments in their marriage.

Andrew Upton and Cate Blanchett have been sharing a blissful marital life since 1997. It has already been more than two decades since the couple exchanged the vows, and in all these years of being together, they became the dad and mom of four children, three sons and one daughter.

After giving birth to three boys, Andrew and his spouse adopted a baby girl on March 6, 2015, and they named her Edith Vivian Patricia Upton. While talking with Vogue, Andrew Upton’s wife revealed that they had wanted to adopt since the birth of Dashiell.

After the adoption, his sons welcomed their baby sister with open arms, and they all have a wonderful time growing up together.

Like her, Cate Blanchett’s spouse is also involved in the entertainment industry. While she has made a good name for herself in front of the camera, Andrew has gained success behind the camera. Hailing from Australia, Andrew is a screenwriter, playwright, and director. Most of his works are adapted from different writers, including Maxim Gorky, Henrik Johan Ibsen, Anton Pavlovich Chekhov for the Sydney Theatre Company, and London’s Royal National Theatre.

As a playwright, he created adaptations of Don Juan, Uncle Vanya, The Cherry Orchard, Hedda Gabler, The Maids, Cyrano de Bergerac, Children of the Sun, and many others.

In addition, he wrote the origin stage play, Riflemind, which opened with Hugo Weaving, on October 5, 2007, at the Sydney Theatre Company. Hugo played an aging rock star who was planning a comeback. The play received a great review in Variety magazine.

According to his IMDb, Andrew has six credits as a writer and has written several movies, including Bangers, Stories of Lost Souls, Gone, and The Turning. Moreover, he has also worked in the Script and Continuity Department.

Andrew has won several awards and accolades for his work as a writer. In June 2014, he was recognized with the Rotary Professional Excellence Award. Apart from that, he has also earned a significant amount of money, which helped him earn a huge net worth.

Runs A Production Company With His Wife

Moreover, Andrew also runs a production company with his wife, Cate Blanchett named Dirty Films. The company that they formed has put out many projects, including the feature film Little Fish and the short film Bangers. In addition, it is set to produce Christos Nikou‘s English-language film debut, Fingernails, in which Andrew will work as a producer.

As a producer, Andrew must have earned a generous sum of money, helping him amass a huge net worth. Talking about his wife’s net worth, Cate Blanchett has a fortune worth $95 million. With a net worth like that, the couple must be living a comfortable life together.

Despite the fame that Andrew has gained, he seems to be private. He lives away from media scrutiny and rarely talks about his personal life in the media. Nevertheless, he must be in good health, and let’s hope we will get to learn more about Cate Blanchett’s spouse in the coming days.