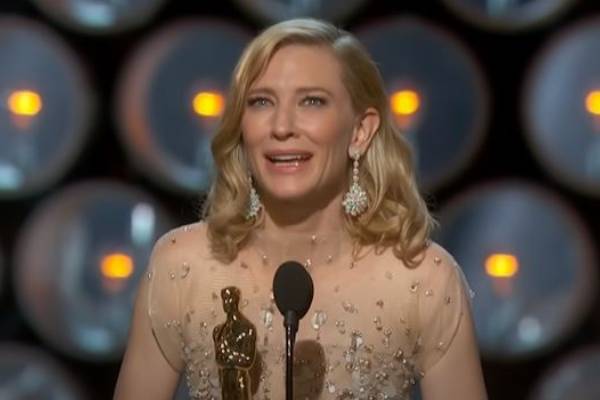 Most of the fortune that Cate has amassed comprises her income from acting career. Image Source: Social Media.

Cate Blanchett is not a new name in the entertainment industry. The actress that played the role of Galadriel, the elf leader, in the popular film series The Lord of the Rings has acted in many movies and television series that have made her a famous and successful actress of her time. Cate Blanchett is known for her beauty and exemplary acting skills, which she has shown in blockbusters, independent films, and the stage.

The actress is taken as one of the greatest actresses of her generation. Furthermore, she has won numerous prestigious awards and accolades in her career. Keeping that aside, it has become a big question regarding her riches. How much has the 52-year-old actress amassed to her name? What are the income sources of Cate?

Hence, in this article, let’s find out about Cate Blanchett’s net worth and earning details.

Cate Blanchett Net Worth And Earnings

As mentioned earlier, Cate Blanchett is one of the most famous and successful actresses in the Hollywood industry. Looking at her professional career and the number of acting projects she has been involved in, the actress must have earned a massive sum of money. Well, she certainly has, as Yahoo Finance reports that Cate Blanchett’s net worth is $95 million.

Similarly, The Richest has reported that Cate’s fortune is $45 million. Nevertheless, she seems to have amassed a multi-million dollar’s worth of riches to her name. So now, let’s learn further about Cate’s income sources.

Cate mainly earns from her acting career. She ventured into the acting world by performing on stage in the 1992 David Mamet play “Oleanna” in Sydney. She acted opposite Geoffrey Rush. Her first feature film was Bruce Beresford‘s movie Paradise Road, where she played the role of a young Australian nurse captured by the Japanese Army during World War II. The film earned $1.9 million at the box office.

Cate landed her first leading role in 1997 in the movie Oscar and Lucinda. Moreover, she also starred as Elizabeth I in the 1998 film “Elizabeth.” Furthermore, it earned $30.1 million in box office collections. Besides these, Blanchett has acted in several other movies, which are given below in the table, along with their box office collections.

As seen in the table above, the films that Cate has been involved in have become a huge hit. Because of her roles, she has been nominated and received many awards ad accolades, including BAFTA, Australian Film Institute Awards, Oscar, etc.

The acclaimed actress gained more fame after starring in the epic fantasy film series The Lord of the Rings. Her fellow actors, Sean Astin, and Elijah Wood, received $250,000, while Orlando Bloom received $175,000 while signing for the franchise’s first movie. Thus, Cate must have made a reasonable sum as the salary fromThe LOTR movies.

Many of her movies are yet to be released. Hence, let’s hope the films become a massive hit and she earns considerably, thus increasing Cate Blanchett’s net worth.

Cate has acted in more films than television series in her acting career. She has worked in at least 75 movies, and Staged, Mrs. America, Stateless, Family Guy, etc., are some of the television series that Cate has appeared in. According to PayScale, an actress’s average salary in Australia is $43.4K (AU$60,000) per year.

Thus, Cate must have earned a significant amount from the TV series roles. In her career, she has held many titles, including Time‘s 100 Most Influential People in the world in 2007. Moreover, in 2018, Forbes ranked her eighth in the World’s Highest-Paid Actresses list.

Cate has also made her name by performing in more than 20 theatre productions. She worked in different pocket theatres in Melbourne during her early career days. In fact, the blonde-haired beauty started her career through a stage role. Through those roles, too, she has amassed a significant amount, which helped increase her fortune.

Also Read: Know How Much Andy Serkis’ Net Worth And Earnings Is

Has Been Involved In Different Other Ventures

Besides acting, the beautiful actress has also been involved in production. She made her debut as a producer in the short movie Bangers. Her husband, Andrew Upton, co-produced the movie and had also worked as a writer and director. In addition, she and her spouse had formed a film production company Dirty Films.

Through the company, the husband and wife duo co-produced another project. The film, Little Fish became a massive hit and was even nominated for 13 Australian Film Institute awards. As per Celebrity Net Worth, she had earned $750,000 from Little Fish.

Moreover, she worked as an executive producer in Mrs. America, Stateless, Carol, and Apples. It has been announced that Cate will be working as a producer in the film, Fingernails.

Looking at her income sources and the projects that she has done, Cate Blanchett’s net worth of $95 million seems plausible.

Apart from her work in the movie industry, Cate Blanchett has also shown interest in the real estate market. She has invested in numerous properties over the years and earned a considerable sum from them. The multi-millionaire actress has an impressive real estate empire from England to Sydney to Los Angeles.

In 2005, Cate and her husband had acquired a property in Hunters Hill, Sydney, for $10.2 million. Later, they made a profit of $9.8 million in 2017 after selling it for $20 million. Moreover, she bought a luxury island retreat in 2011 in Vanuatu. The property, named Matanara, is located in a secluded waterfront location on Efate Island. They listed the property for sale for $1.4 million in August 2019.

In addition, Cate has another real estate property in Berowra Creek, which she had purchased in 2014 for $1.495 million. The same year, they paid almost $2 million for a waterfront apartment in Elizabeth Bay, Sydney. The home is reportedly an investment property for their kids.

Similarly, in 2015, Cate bought a five-bedroom apartment in Sydney’s CBD for $8 million. In March 2020, she listed the house for sale for $12 million. Furthermore, the actress also owns a home in East Sussex, which the LOTR star had purchased for $6.25 million in 2016. In January 2021, Blanchett revealed that she was building a private gallery there.

As mentioned earlier, Cate’s fortune is $95 million. With a multi-million dollar worth of riches, there’s no doubt that she lives a comfortable life with her husband and kids.

Let’s hope Cate Blanchett’s net worth increases in the future, and she continues adding more to her real estate collection.