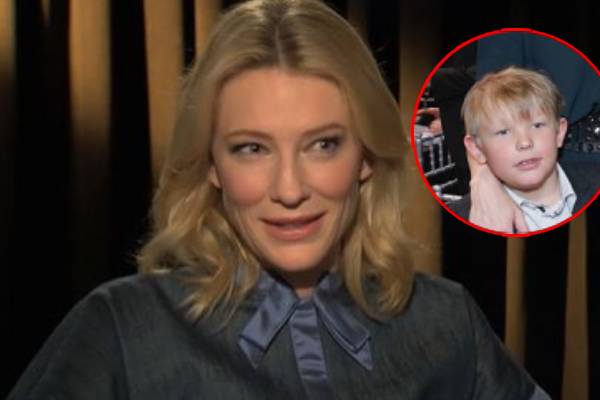 The Lord of the Rings trilogy based on the fantasy novel written by J. R. R. Tolkien is one of the most remarkable film series ever made. Moreover, the movie also became a major financial success resulting in it being one of the highest-grossing trilogies of all time. Because of the movie’s success, the cast also gained worldwide prominence. Cate Blanchett is one of the original cast members who became a household name because of her role in the series.

Cate played the role of elf leader, Galadriel in The LOTR trilogy, and since then, her career has not stopped booming. Because of her professional success, many fans and followers have also been eager to know about her personal life. And there can’t be any doubts to say that her personal life is as successful as her professional life. The beautiful actress has been married for over two decades and is a doting mother of four.

Well, in this article, let’s take a look at Cate Blanchett’s son, Roman Robert Upton, and how he is growing up.

Second Child Of Cate And Andrew

The LOTR star, Cate Blanchett, has been happily married to Andrew Upton, with whom she got married on December 29, 1997. Interestingly, Andrew and Cate got engaged three weeks after beginning their relationship and eventually tied the knot. Since then, the married duo has been enjoying their blissful marital life full of love and care.

Seven years after their marriage, on April 23, 2004, in London, Cate Blanchett’s son, Roman Robert Upton, was born. They did not disclose many details about the baby then, and today too, Roman’s parents have kept him away from the spotlight. Furthermore, in 2020, on Jimmy Kimmel Live! Roman Robert Upton’s mom revealed that his name was inspired by the filmmaker Roman Polanski.

However, some were concerned about the name, considering the filmmaker’s convictions as a child sex offender. Later, she stated that the name was the French word for book. Nevertheless, he must have grown up with immense love and care from his dad and mom.

Cate Blanchett’s Son Is Not Her Only Child

As mentioned earlier, Roman Robert Upton’s mom gave birth to him seven years after tying the knot with his father. Furthermore, Cate Blanchett’s son, Roman, is not the only child of the actress. He has an elder brother and two younger siblings.

On December 3, 2001, Roman Robert Upton’s elder brother, Dashiell John Upton, was born. His parents named him after the author of the classic crime novel The Maltese Falcon (1930), Dashiell Hammet.

Moreover, in one of the interviews, Cate revealed that when Roman was born, his elder brother, who was still young, gave him his favorite blanket. Roman’s mom described the moment as something extraordinary that was done out of motherly love.

Well, Roman is close with all his siblings, and they all are growing up having a wonderful time.

Unlike her other kids, Cate Blanchett’s son, Roman Robert Upton, has made few public appearances. He has accompanied his mom to different red carpet occasions, including the 2012 Helpmann Awards in Sydney, Australia, and the 2018 SIHH trade show in Geneva, Switzerland. Moreover, he was also seen with his mom at the Critics Choice Awards 2014.

Roman seems to have adjusted with the paparazzi and media attention. However, talking about his education, it has not been revealed what grade he studies or the institution he goes to. Moreover, in 2018, a video was uploaded on a Twitter page, where he was seen explaining some structure that he made.

According to the post, he had done the project to create greater equity for disabled people.

@cateblanchetjay: ‘Can we please take a moment to appreciate Cate Blanchett’s son Roman Upton for trying to create greater equity for people with disability and how amazing Cate Blanchett is at parenting her kids. ‘ pic.twitter.com/nKUiIqt63s, see more https://t.co/BQ71DXQoCP

While it has been known that Roman’s brother, Dashiell attends an acting school, it is yet to know what Roman will pursue and which institution he will go to. Nevertheless, let’s hope to see him become successful in whatever profession he follows in the future.