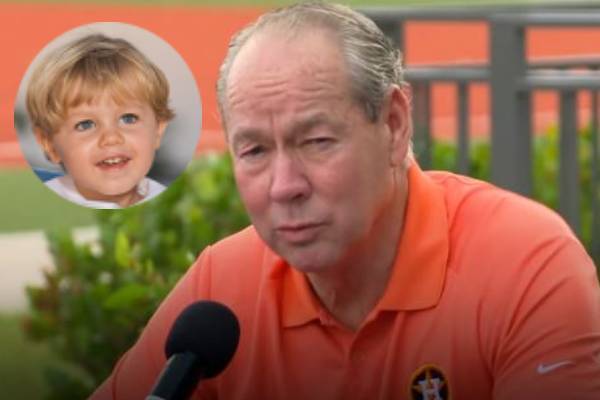 James Robert Crane, popularly known as Jim Crane, is a businessman from Houston, Texas. He is famous as the chairman of the Houston Astros, a Major League Baseball (MLB) team. Moreover, he serves as the chairman and chief executive of Crane Freight and Shipping, Crane Capital Group, and Crane Worldwide Logistics.

The successful businessman shares a blissful marital life with Whitney Wheeler, also known as Whitney Crane. Moreover, he is a doting father of three children, one of whom he shares with his current wife, Whitney. Thus, in this article, we shall know about Jim Crane’s son James Robert Crane II and see how he is growing up.

James Was Born Before Their Parents Marriage

As mentioned earlier, the Houston Astros chairman, Jim, has three children, two sons and a daughter. Jim Crane’s son, James Robert Crane II, is his youngest child, whom he shares with his current wife, Whitney. However, James Robert Crane II’s dad and mom have not revealed when he was born.

Furthermore, James was born before his parents’ marriage. They were married over Memorial Day weekend in 2017 in Floridian National Golf Club. However, it has not been disclosed when they met and how long they dated.

As mentioned earlier, James’ birth has been kept a secret. But according to a 2017 article, which detailed his parents’ marriage, the little one was three years old at that time. However, a Houston Chronicle article of October 2017 stated that he was just two. Despite the secrecy surrounding his age and birth date, there is no doubt that James Jr. is the apple of his mom and dad’s eyes.

James’ dad and mom seem to have raised him away from the unnecessary media attention. As the only child of his parents, he surely is pampered really well.

Aforementioned, James Robert Crane II is the only kid of Jim Crane and his wife, Whitney. But, he is not the only child of his dad, Jim. Before marrying his mom, James’ dad was married to two other women.

Jim Crane’s first wife was Theresa Crane before he became a successful businessperson. But he kept the relationship under the wraps and has not disclosed much information about it. It is unknown when the former pair tied the knot, but they welcomed two children while they were together.

James Robert Crane II’s half-brother is Jared Crane, who is also the eldest child of Jim and Theresa. James’ half-sibling, Jared’s birth details are also unknown. On the other hand, his half-sister, Krystal Crane Thompson, was born two years after Jared.

After his first marriage ended, James Robert’s dad got married to Franci Neely Crane in 1993 and ended the marriage in 2015. Jim Crane’s son, James, must have a good relationship with his half-siblings.

Will James Make A Career For Himself In the Sports Industry?

The 68-year-old chairman has handled his professional life and personal life gracefully. He and his partner have raised their kids easily, even after his hectic schedule. Despite being in the limelight, he has successfully kept his son away from the spotlight.

Because of his successful business ventures, Jim Crane’s son is growing up in a loving and comfortable household. In the future, too, there’s no doubt that he will have access to finer things in life.

As James’ dad is the chairman of an MLB team, many have questioned if he would also make a career in the sports industry. Who knows, he might be trained by some talented coach in the MLB and might become a successful sports personality.

Unfortunately, it is too soon for James to figure out what he wants to do in the future. And as his parents have not talked much about him in the media, his interests remain hidden.

Nevertheless, let’s hope James finds success in whatever path he chooses in the future.