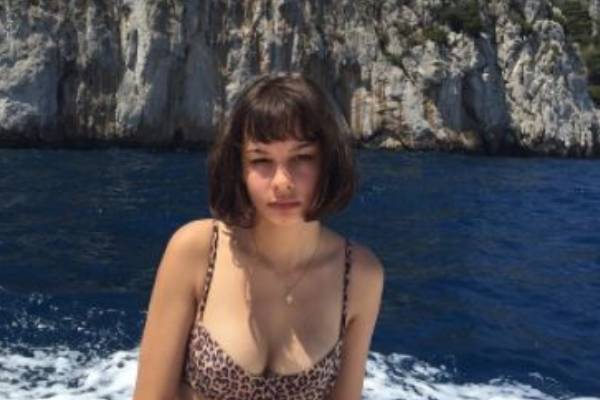 Justin and Keisha have been married since 1993, and till today, their marriage is still going strong. Well, in their beautiful and blissful marriage, they welcomed five children.

How about we learn in detail about Justin Chambers’s daughter, Kaila Chambers, and her whereabouts.

Is One Of The Twin Daughters Born To Her Parents

As mentioned earlier, Kaila Chambers’s parents have been married since 1993. In all those years of togetherness, they welcomed five beautiful children. Justin Chambers’s gorgeous wife, Keisha Chambers, gave birth to Kaila Chambers in June 1997.

As stated above, Kaila is one of the twin daughters of her parents. She and her twin sister, Maya Chambers, grew up together, and both of them have a great bond.

Kaila frequently uploads pictures of her twin sister and herself. In one of the posts, she wished her a happy birthday saying, “Happy Birthday worm.” So, it seems like Kaila has nicknamed her sister worm.  Furthermore, like Kaila and her sister, their dad also has a twin brother, Jason Chambers.

Kaila Chambers’s brother, Jackson, is the youngest one and only boy in the family, so he is growing up with lots of pampering from his dad, mom, and sisters. Furthermore, Kaila’s sister, Eva Chambers, is in the band Pinky Pinky, where she performs as a bassist.

Eva has traveled to several places for her performance. Similarly, Kaila’s twin sister, Maya, is a tattoo artist and is pretty successful at her work.

Justin Chambers must be a proud father as all his children have talent and passion in a different field. Like the actor, his daughter, Kaila Chambers, is also a creative person. Going through her Instagram, we can see that most of her posts are of vintage style. She uploads several of her creations and arts on her social media account.

Furthermore, just like her father, Kaila is also in the entertainment field but in a different department. She seems to have a passion for videography and is an emerging filmmaker. She has uploaded several BTS pictures of different videos which she has shot.

Similarly, she and her friends presented an animated picture show, Women Of The Moving World Series. The show presented some great imaginative camerawork, movie cartoons, and exquisite artistry by women.

Moreover, this is one of the shows that Kaila has presented with her friends.

Similarly, Kaila also has a Vimeo account, where she uploads several videos that she has captured. Although Justin Chambers’s kid, Kaila, has just started her career, she seems to have found success in her work, and we hope she succeeds in her life.

Justin Chambers’s beautiful daughter, Kaila Chambers, is currently in a relationship with Louis Osmosis. While it has not been revealed when they met and when their relationship started, it is sure that both of them are deeply in love with each other and are often spotted together.

Kaila Chambers’s partner, Louis, is a Brooklyn-based artist. The couple seems to have a similar passion for arts, which might be why they got close. Similarly, Louis was selected as an artist-in-residence with Sharpe-Walentas Studio Program in June 2021. Going through his Instagram, we can see that he has uploaded several pictures of his masterpieces.

Is The Social Butterfly In The Family

As mentioned earlier, Justin Chambers’s child, Kaila Chambers, has gained fame as the daughter of popular actor and Keisha Chambers. As compared to her other siblings, she seems to be active on her social media profiles. She often uploads several pictures of hers on her Instagram.

Kaila seems to share a close bond with her grandfather, John William Eugene Chambers II. She has uploaded many pictures with her grandpa, whom she calls “Papi.”

Hence, there might not be any harm to say that Kaila is the social butterfly in the family. She seems to be living a great life with her siblings and parents.

Here’s to hoping to know more about Justin Chambers’s daughter, Kaila Chambers, in the future.

The name Kaila has a Hebrew and Hawaiian origin which means “the laurel crown or style.”