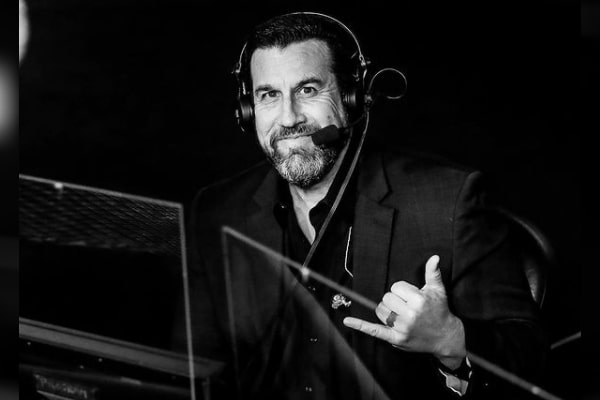 He is globally recognized for officiating numerous Ultimate Fighting Championship bouts, dating back to UFC 2. The 6’3″, 260 lb, made other fighters look small hence earning him his nickname. The 58-year-old is responsible for making most of the MMA rules and was the first to set the idea of having an octagon ring rather than a squared one. Despite parting ways with the UFC, McCarthy is still a regular MMA face.

Aside from his involvement in the combat sport, Big John McCarthy is also a father of three. His marriage with Elaine McCarthy blessed him with two sons and a daughter. Below let’s look into Big John McCarthy’s children and get to know them better.

Big John McCarthy is living life golden as he is part of the broadcasting team for Bellator MMA and is responsible for most behind the scene actions. He and his wife Elaine have been married for almost 37 years.

The lovebirds are always together, spending quality time with their friends by having road trips, hiking, and get together. Information regarding the birth of their children is kept to a minimum.

Also Read: Andre Drummond’s Children And What They Are Doing Now

Big John McCarthy’s son Ronald II McCarthy is a family man currently working as an MMA judge in Bellator MMA and the UFC. He is married to Megan McCarthy, a hairstylist, since 2009, and is blessed with three kids.

Their beautiful family consists of two daughters and a son. The father of three is better known as Ron Mac, and some of the recent events he judged are on UFC on ESPN 24, Bellator 257, UFC 260, UFC 259, and UFC on ESPN+ 44.

He is also a former police officer and close friend to MMA veteran referee Mike Beltran. Ron Mac usually spends time with his family and is always present for his kids.

Big John McCarthy’s son John Michael McCarthy Jr. is named after him. Information regarding his professional life is scarce as he remains very private.

Nevertheless, in 2017, he married his long-time partner Vianey McCarthy who is as private as him. Unlike his brother, Michael isn’t as open regarding his overall lifestyle but has always been grateful to his parents.

He is currently residing in Rancho Cucamonga, California, and is a huge fan of the Los Angeles Clippers & Ontario Reigns.

Britney, The Only Daughter

Big John McCarthy’s daughter Britney McCarthy remains a mysterious child due to the lack of details.

The only girl child of John and Elaine served in the U.S. Marine Corps and retired in 2019. According to her Facebook page, Shae Segobiano McCarthy, the sister of two served for nine years and is currently enjoying her time as a civilian.

In 2012, the marine trooper had a major thoracic nerve outlet surgery which sidelined her for a couple of weeks. John and Elaine were by their daughter, who is also known as Shae’s, side.

Want to wish my daughter a Happy 24th Birthday!! I love you Shae, you always make me proud pic.twitter.com/0mrvYBUQn2

Moreover, Britney is a married woman. She has been in a marital relationship with Gabriella Segobiano McCarthy since 2018. McCarthy met her wife while they were serving in the U.S. Marine Corps. Further information about McCarthy and her wife has not been revealed yet but we hope they are enjoying their time as a married pair.

With all that said, Big John McCarthy’s kids are living happily along with their families. Get together are kept to a minimum as everyone is busy working and traveling due to which there is hardly pictures together.

Nonetheless, the 58-year-old has a loving family who is always looking after him. We wish Big John McCarthy and his family the best for their welfare, happiness, comfort, & the future.