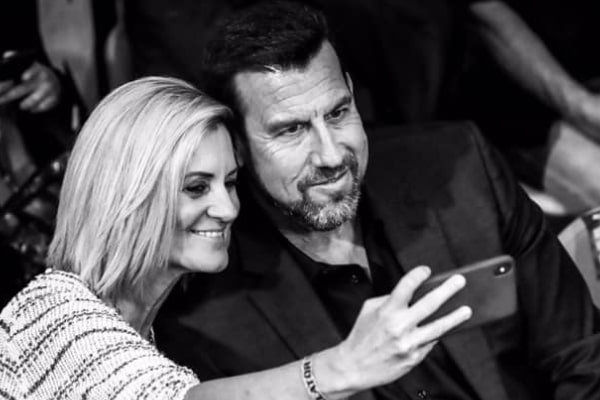 John Michael McCarthy is an American mixed martial arts referee and broadcaster for multiple MMA organizations. He is better known as ” Big John” for his 6’3″ and 260 lb stature.

The 58-year-old is one of the ideal figures in the sport of MMA as he is responsible for most of its rule. He has officiated countless bouts in the Ultimate Fighting Championship, dating back to UFC 2. Despite working in the UFC for decades, Big John parted ways with the organization and is working in the broadcasting section for Bellator MMA.

Aside from his profession, the MMA ref is married to the beautiful Elaine. Below let’s dig up and know more about John McCarthy’s wife, Elaine McCarthy.

Big John and his wife Elaine McCarthy are examples of the ideal husband & wife as they have been together for almost 37 years. The lovebirds were long-time partners before sharing the marital vows on November 24, 1984.

When you scroll through their social media, the couple is always seen together and spending quality time. Despite Big John’s absence due to work duties, the partners have maintained a strong bond.

Moreover, they are blessed with two sons and a daughter. All of Elaine’s kids are well settled in life, and she, along with her husband, are also grandparents.

John McCarthy’s wife, Elaine McCarthy, is a loving wife and a well-versed mother. The pair have 3 kids together, as mentioned above, two sons and a daughter.

Basic information regarding their birth and age differences is kept within due to which people cannot know their birth order. Britney McCarthy, Ronald II McCarthy, & John Michael McCarthy Jr. are the children of Big John and his wife.

Their only daughter served in the U.S. Marine Corps, and Ronald is a former police officer and currently an MMA judge. McCarthy, Jr. married Vianey McCarthy in 2017 and lives a low-key lifestyle.

She Is Also A Grandmother

John McCarthy’s wife, Elaine McCarthy, is a mother of three and a grandmother of three. Their son Ronald McCarthy also known as Ron Mac is married to hairstylist Megan McCarthy since 2009.

They were the ones to bless the former MMA ref and his wife with grandchildren. The MMA judge who works for both UFC and Bellator MMA has two daughters and one son.

The grandmom of three loves to spend time with them and takes them on outside adventures like boating and hiking alongside her husband.

Her Daughter Is A Part Of The LGBT Community

Looking into Elaine’s social feeds, her daughter Britney McCarthy is usually not present. Firstly she is a Marine trooper which made her hard to reach as she was away on duty. However, she retired in 2019 and is now assimilating to the civilian lifestyle.

Want to wish my daughter a Happy 24th Birthday!! I love you Shae, you always make me proud pic.twitter.com/0mrvYBUQn2

Britney is even called Shae by her parents out of love and but they rarely post any pictures of her. She dons short hair, unlike most of the girls, and is a part of the LGBT community. She is currently married to her partner Gabriella Segobiano McCarthy.

Both her parents have accepted her and shower her with lots of love. Britney even underwent major thoracic nerve outlet surgery back in 2012, and her mother was always by her side.

As both Elaine McCarthy and her husband John McCarthy are relieved from parenting duties, they are usually on the road. Traveling in motorcycles, the couple cruise around America, living the American dream.

They are usually joined by their friends, such as MMA legend and former UFC heavyweight and light-heavyweight champion Randy Couture and his wife.

Other than that, they even travel alone, making them explore and experience new things together. Aside from the UFC champ, Big John is also accompanied by his Bellator MMA broadcast partner Josh Thomson.

Elaine Is A Housemaker

The mother of three is a housemaker, due to which she has been able to focus more on her family and surrounded them with love.

John McCarthy’s wife is also a pet lover, and they recently took in a wild Possum whom they named Fred. Fred the Possum has a best friend, Jitsu, who is a small brown dog.

Regardless of everything, John McCarthy and Elaine McCarthy are ideal examples of a long-lasting relationship despite always having the spotlight. We wish them the very best for the future and overall health.