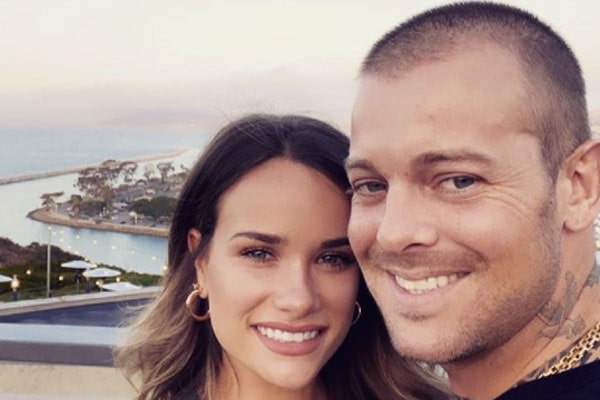 Ryan Sheckler is in a relationship with a new girl. Image Source: Ryan Sheckler's Instagram.

Ryan Sheckler is a professional skateboarder and entrepreneur who rose to fame after being the youngest X Games gold medalist in 2003. Sheckler was just thirteen years old when he competed in the X Games and won the gold medal. At seventeen, he brought his own MTV reality series ‘Life of Ryan‘ in 2007. It aired for three seasons before he instantly quit. Moreover, Sheckler starred in the short-format video series Sheckler Sessions on Red Bull TV for four seasons.

During an episode of In Depth with Graham Bensinger in May 2021, Ryan Sheckler revealed the struggles he faced as a reality TV star on MTV. Also, he opened about his dating life in the same episode. Ever since then, many of Sheckler’s fans are showing interest in his love life.

Reportedly, Ryan Sheckler was in a romantic relationship with Mia Bonde. There are speculations that he might have married her after dating her for some period. So, is Mia Bonde actually Ryan Sheckler’s wife, or have they parted away from each other? Find it out all here.

The former reality TV star Ryan Sheckler was in a romantic relationship with Mia Bonde for a short period only. According to online sources, Sheckler started dating Bonde in 2015. As proof they were having an affair, Ryan often used to post his then-girlfriend’s pictures on his social media handles. Additionally, the two even shared cute messages with each other to let the world know that they were officially a couple.

Moreover, Ryan Sheckler’s ex-girlfriend, Mia Bonde, used to accompany him at various public events when they were together. Seeing their chemistry, many of Ryan’s fans were expecting Bonde to be Ryan Sheckler’s wife. However, it seems like things didn’t go well between the former lovebirds. As a result, they went separate ways. But, still, there are some pictures of Mia available on Sheckler’s Instagram.

Before being in a romantic relationship with Mia Bonde, Ryan Sheckler was romantically linked with many other beautiful ladies, including Melissa Pastrana, Emma Roberts, AJ Michalka, and Kayla Kudla. However, all of his past relationships did not last long, like his bonding with Mia Bonde. While talking to Graham Bensinger, Sheckler said that it was his career as a reality TV star that prevented him from dating for many years.

Soon after ending his relationship with Mia Bonde, Ryan Sheckler was romantically linked with Christina Perrault for a while in 2017. The news of them having an affair spread in the news headlines after Perrault accompanied Sheckler in various events and appeared on his Instagram. However, their affair came to an end after some months.

Happy resurrection day everyone! Jesus loves you just as you are❤️ pic.twitter.com/VC7HaYrXQQ

Lately, Ryan Sheckler is in an intimate relationship with a gorgeous beauty, Abigail Baloun. The pair reportedly began dating publicly at the beginning of 2020. Ever since then, Baloun often appears together with her love, Sheckler, on his social media handles. Sheckler does not hesitate to show his love for his girl via his gram and other social networking handles.

However, Ryan Sheckler’s girlfriend, Abigail Baloun, seems to maintain a private life. She is available on Instagram, but her profile is set to private. But, according to the ones who have access to her public posts, she also posts snaps with her boy, Ryan, and other friends. We hope she will make her Instagram accessible for everyone so that we can learn more about her and her bonding with Ryan Sheckler.

According to Baloun’s Facebook page, she attended Concordia University, Irvine, from where she earned a degree in Accelerated Bachelor of Science in Nursing in 2019. Soon after graduation, Baloun joined MemorialCare Miller Children & Women’s Hospital Long Beach in January 2020. Ever since then, she serves as a Mother-Baby Registered Nurse at MemorialCare.

As Ryan Sheckler is a resident of San Clemente and his girl, Abigail Baloun, also works there, it has been easier for them to stay close and keep their relationship strong. We hope Ryan won’t face a break-up again, and soon we will get to hear the good news of Abigail Baloun being Ryan Sheckler’s wife.