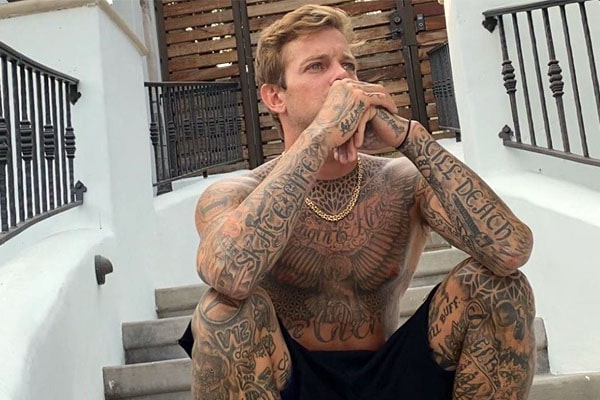 Ryan Sheckler is a well-known American professional skateboarder, entrepreneur, and former reality TV star. He rose to prominence as a genius in sports after being the youngest-ever gold medalist of the X Games at age thirteen in 2003. Some years later, Sheckler started his own reality TV series ‘Life of Ryan,‘ which ran for three seasons only.

Lately, Ryan Sheckler is busy with his career as a skateboarder and his foundation named The Sheckler Foundation, which works for children and injured athletes. Besides skateboarding and philanthropic works, Sheckler has a great affinity for tattoos as well. Different tattoo designs have occupied almost every part of his body.

So, what could be the meaning and the reasons behind all of Ryan Sheckler’s tattoos? Know it all here.

Growing up skating and being at events with the motocross and BMX guys who had tattoos over their bodies always influenced Ryan Sheckler. But, none of his family members had a tattoo till his dad, Randy Sheckler, got one. So, he was free to start getting them.

For his first tattoo, Ryan Sheckler got his family name ‘SHECKLER’ inked on his back, which almost all of his family members have on their back.

According to Ryan, it took his tattooist over four hours to get it done. Moreover, he revealed that it was not as excruciating as he thought it was going to be. From that point, Sheckler became hooked on getting tattoos.

Also Read: Take A Look At Jackson Wang’s Tattoos And The Meaning Behind Them

After getting his first tattoo on his back, Ryan Sheckler added numerous tattoos on his body parts. To date, Sheckler has over fifty tattoos inked on his body. Here are some of Ryan Sheckler’s tattoos that you might be interested to know, along with their meanings.

Ryan Sheckler has inked the words ‘Strength & Honor’ on his upper chest.

He and his dad often used to watch the movie ‘Gladiator‘ together, in which the phrase ‘Strength and Honor’ was used most of the time. So, before participating in skateboarding contests, Sheckler and his father would say that phrase to each other.

Eventually, Ryan once told his dad that both of them should get that phrase tatted. At first, his father did not like the idea, but later, he went on and got the tattoo without Ryan. Seeing his dad’s tattoo, Ryan also got one.

The phrase ‘Skate and Destroy is the tattoo that Ryan Sheckler got on his right bicep. Another pro-skateboarder, Nyjah Huston, also has the same phrase inked on his forearm.

The skateboarding expert sports the phrase ‘Skate Life’ on his right arm. Just slightly above his elbow, there is a tattoo of a black star holding up a city skyline.

According to Sheckler, it is one of the most important tattoos to him as it represents everything about him. Every time he goes out to skateboard, he expects to come back quite beat up and brushed, a part of his skate life.

An Eyeball And ‘Till Death’

On Ryan Sheckler’s left arm, there is the tattoo of the words ‘Till Death.’ It depicts his commitment to skateboarding until his last breath.

Moreover, after the demise of his grandma, he got a back piece of her name ‘OLETA ‘ in her memory.

Red Diamond Below The Word ‘Fear’

There is a red diamond tattooed on Ryan’s inner right arm. And, just above the diamond, the word ‘Fear’ decorates his arm. Sheckler explained that he travels with the Bible and he gets too much consumed in his life. So, it is why he got those tattoos to remind himself that it is God’s plan.

Ryan Sheckler has a tattoo of an American eagle on his chest. There is a funny story behind Ryan getting that tattoo which he shared with Inked.

Sheckler revealed in an interview that he went to Brad Reis and wanted to get an eagle on the front of his shin. Reis looked at his leg and requested him to show his chest, and drew the eagle on his chest. It took him 12-13 hours to complete that design.

One of the favorite tattoos of Ryan Sheckler on his body is ‘JESUS CHRIST’ inked on his knuckles occupying both of his hands. Tattooist Franco Vescovi, whom he works with most of the time, did it. Vescovi also did the Virgin Mary tattoo on the back of his right hand with the same needle.

Ryan Sheckler’s other favorite tattoo from his collection is his back piece of San Clemente. It represents his life at home and life on the road permanently.

Some other black-and-gray designs inked on Ryan’s body include the word ‘tomorrow’ on his arm, a skull with wings on his neck, a portrait of Jesus Christ, a skateboard, numbers, an armed bomb, and many more.

Any Regrets On Having Some Of His Tattoos?

Ryan Sheckler has no regrets about having any of his tattoos. For him, his every tattoo is like stories. Most of them remind him of his bygone moments.

For example, the tattoo of the words ‘JETLAG’ inside a travel bag inked on his right arm reminds him of Las Vegas. While revealing his tattoos and injuries on an episode of In Depth with Graham Bensinger, Ryan told Graham about his trip to Las Vegas. He also said that the first day he showed up in Australia he was jet-lagged. So, Sheckler thought of getting a jetlag tattoo. Immediately, he went to his tattooist and got it. He even inked the word ‘Day 1’ just below his Jetlag tattoo.

Hence, Sheckler likes all of his tattoos. For him, his tattoos work as an adrenaline rush replacement for when he’s sidelined from skateboarding due to injury. Whenever he gets hurt, he goes to get a new tattoo.

Furthermore, Ryan Sheckler even predicts an 80% chance of getting a tattoo of a skull on his head if he gets bald in the future. He wants to be a grandpa who has the head fully tattooed. So, what do you think? Will he actually tattoo his entire head in the years ahead? It’s his choice, but we hope we will get to know the meanings of his other tattoos as well in the upcoming days.