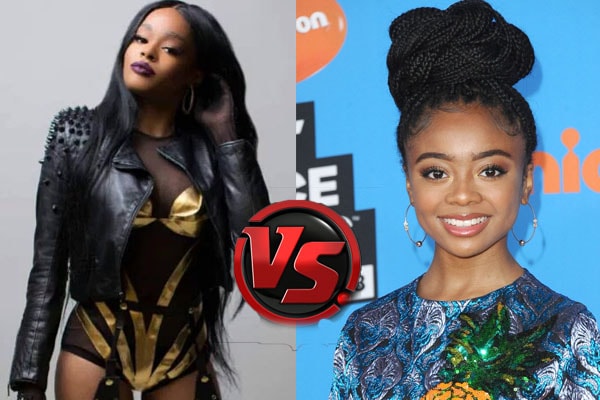 Another name was added under Azealia Banks‘ list of people she has had feuds with. People might have thought that Azealia only took shots at older people, but she proved them wrong. This time she started a feud with Disney’s 14 years old now 16, Skai Jackson. The feud was started over Zayn Malik.

Azealia Banks is an American singer, rapper, songwriter and also an actress. She has many famous songs, but she is more famous for her rants towards other celebrities. As for the little Skai Jackson, she is an actress and is known for her portrayal of characters in Jessie and Bunk’d, Disney Channel series.

The Twitter feud between Azealia Banks and Skai Jackson started when Azealia ranted about Zayn Malik. She accused Zayn of plagiarizing her own. In a tweet, Azealia wrote,”Lol zayn’s faggot a** gave my cell number to his fans. ” For which, Zayn responded “My @’s too good for you.” But still, Azealia had a lot of things to say about Zayn.

Noticing that the 14-year-old Skai Jackson tweeted stating that Azealia needs to simmer down a little,

Azealia Banks needs to simmer down a little??

For which Azealia Banks had her way of replying. She suggested the young Skai grow some hips and start her menses plus stay in a child’s place. The Bunk’d star Skai also didn’t stay quiet, she responded with a bit of class. 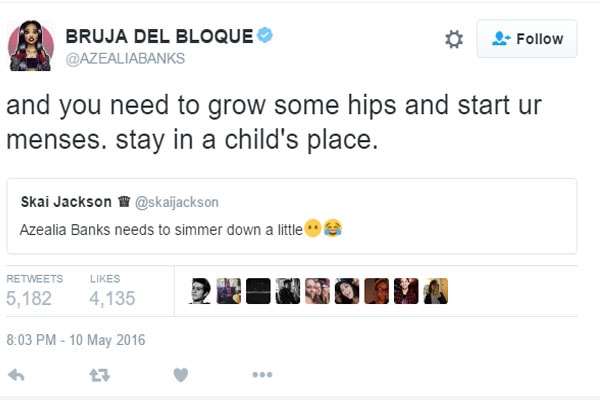 The shots were fired from both sides. Azealia was as ruthless as ever. It came to the point when Azealia asked if Skai’s mom was tweeting for her. Nevertheless, everyone was enjoying the newly sparked Twitter feud. 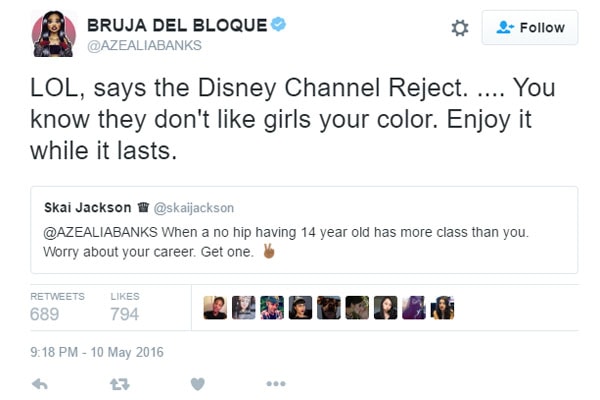 Being a star of the Disney channel, the young Skai was famous for her memes too. And people surely were cheerful when Skai was destroying Azealia Banks. Plus over the years Twitter as seen many feuds including the feud between Talib Kweli and Iggy Azalea.

The teenager Skai Jackson is not the only to have a feud against Azealia. The rapper has locked on horns with many other celebrities. Cardi B, Nicki Minaj, Rita Ora, Pharrell are some of the top names with whom Azealia has had a feud with. And at the moment, Azealia Banks is starting a feud with Beyonce.