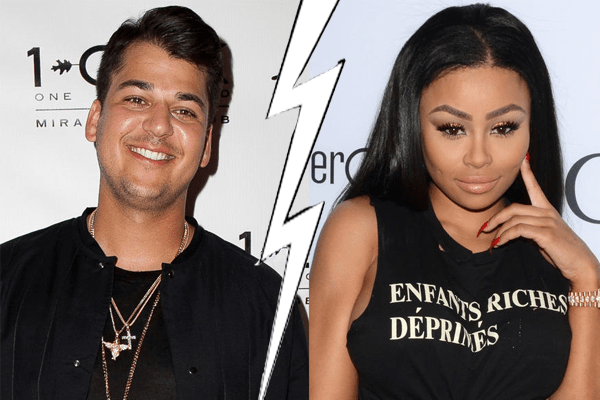 Rob and Chyna were in a romantic relationship since January 2016 despite Blac was a mother of a son with Rob’s sister Kylie’s longtime boyfriend Tyga. Rob had proposed Chyna in April 2016 and seven months later the ex-couple became parents of a daughter named Dream Renee. But later in 2017, Blac cheated on Rob which led to their dispute.

The suspect of Rob arose when Chyna messaged a picture of herself sleeping with another man. Rob claimed that Chyna had a physical relationship with at least eight men in less than a month.

Rob posted a photo of Chyna without underwear on his Instagram page. Moreover, he shared a video of Chyna kissing another man. In the video, the unknown man was lying down, and Chyna was above him kissing the man and facing towards the camera.

The TV Personality and businessman Rob had guessed that the boy in the video was Rapper Rarri True, but later it was confirmed that it was a musician Mechie.

Rob proved the media that his ex-fiance cheated him with eight men by posting screenshots of his messages with the guys Chyna was linked. All of them has agreed that they had such relation with Chyna.

Blac Chyna defended back to the posts of Rob. She accused Rob of beating and physically abusing her through her Snapchat. Chyna responded, but the lady didn’t even deny that she has cheated her ex-fiance and daughter.

Despite Blac Chyna and Rob Kardashian Feud, Chyna had sent a birthday card along with birthday wish to her ex-fiance Rob.

Just some hours before Chyna sent a nude photo to Rob, Rob had bought a 250K of Jewelry for his ex-partner Chyna. It might have affected Kardashian a lot when he was all planned to surprise his love, and the one whom he loved was sleeping with another guy.

Rob and Blac are living separately now. Rob is living a happy life with his beloved daughter Dream whereas Blac is also single and happy.