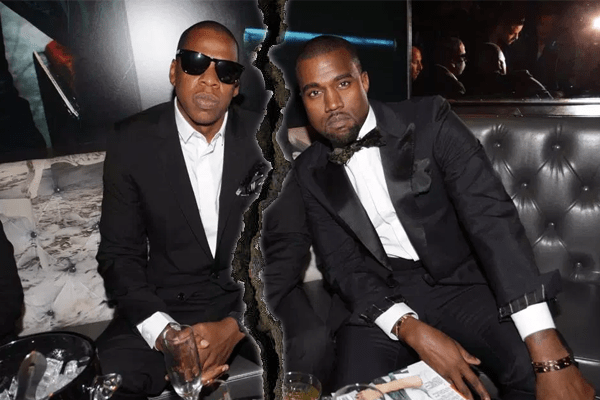 Once they were brothers in arms, but now they can’t even see eye to eye. The rivalry between Jay Z and Kanye West is one of the most interesting sagas in Hollywood. Kanye and Jay Z are two of the most successful rappers in the industry and their collaboration produced some iconic tracks like “N***** In Paris”, “Made In America”, and “No Church In The Wild”.

But after falling apart, they absolutely hate each other now. Jay Z was the mentor of Kanye and Kanye produced Jay-Z’s music, but their chemistry is now gone. The history of their friendship and falling apart is a fascinating one Here we look at the reasons why there is beef between the two.

Their relationship was moving smoothly indeed since Kanye started working as a producer for Jay Z and later got into rapping himself and the two formed a legendary duo. But tensions began precisely at the 2009 VMA’s when Kanye got on the stage and created a scene and Jay Z felt his buddy upstaged Taylor Swift as well as his wife Beyonce.

Even after this debacle, Kanye and Jay-Z’s relationship was moving on smoothly with them collaborating in 2011, dropping hit tracks like Otis and N***** in Paris. But cracks started to soon appear n their relationship. First time this was publicly acknowledged in 2014 as both Jay Z and his wife Beyonce didn’t attend Kim Kardashian and Kanye’s wedding. This led to rumors that there was beef between the two.

Later, when Kanye’s wife Kim was robbed in Paris. Jay Z was nowhere to be seen. He didn’t offer any help when his friend Kanye needed it the most. This showed there was further hatred between the two former best friends.

Everything came to a head in 2017 when Kanye launched a rant aimed at Jay Z. Speaking for 17 minutes at the Saint Pablo Tour Concert held at Sacramento, California, he started the speech supporting Donald trump but quickly started taking jabs at Jay Z, asking Jay Z not to get him killed.

In 2017, Jay-Z dropped a new album called 4:44 and many of the tracks in the album took many shots at Kanye West. Kanye responded to this by removing all his songs from Jay-Z’s streaming service Tidal. Later in the year, Jay Z finally admitted that there was a rivalry between the two but called it a “brotherly rivalry”. In May 2018, Kanye expressed his feelings during an interview with iHeartRadio, saying that he was hurt by Jay-Z and Beyonce, not attending his wedding.

While it does mean that their rivalry is far from over, both Jay Z and Kanye are hurt more than anything else. While they don’t speak now, we could see them reconcile in the future.