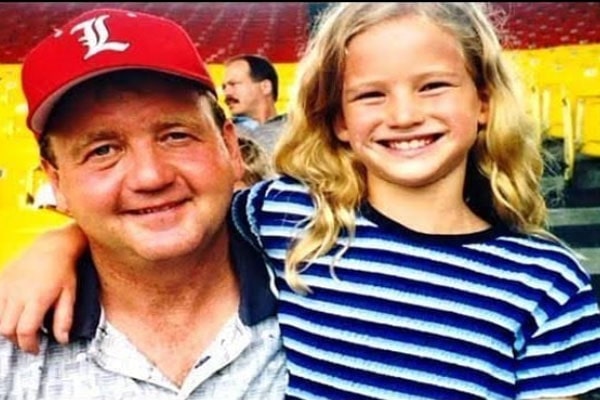 Jennifer Lawrence is the only daughter of Gary Lawrence with his wife, Karen Lawrence. Image Source: Social Media.

Gary Stephen Lawrence is the proud dad of the American sweetheart, Jennifer Lawrence. He raised his now-famous daughter, Jennifer, in a suburb just outside Louisville, Kentucky, with his beloved wife, Karen Lawrence. While raising his little girl, Gary, and his spouse, Karen, did everything in their power to keep her far from acting.

However, with the constant urge of Jennifer, they finally supported her and helped her become who she is in the present.

While Jennifer Lawrence is shining out in the American showbiz, many are curious to know about the ones who raised her. So, here, we will be especially tailing about Jennifer Lawrence’s father, Gary Lawrence, including his job and many more.

Owner Of A Contracting Business

While Jennifer Lawrence is gaining massive success and earning millions from her career as an actress, her father, Gary Lawrence, is engaged in the construction business. According to various online sources, he owns a construction company named Lawrence & Assocs. Concrete Design at Hugh Ave, Louisville, Kentucky.

With over two decades of excellence and experience, Gary Lawrence’s construction company helps its customers create a look that magnifies the natural beauty of concrete. Since 2006, Gary’s close friend, Jean Henry is handling the post of President of his company.

According to the Facebook page of Jennifer Lawrence’s father, Gary Lawrence, he earned his business degree from the University of Louisville in 1978. Ever since completing his university education, he is actively pursuing his career as a businessman.

Besides owning a construction company, Mr. Lawrence runs his daughter’s foundation, ‘Jennifer Lawrence Arts Fund (JLAF)’ with his family members. The members of his family who work alongside him at JLAF include his daughter-in-law, Meredith Lawrence, and his wife, Karen Lawrence.

Jennifer Is His Only Daughter

The international superstar Jennifer Lawrence is the only daughter of Gary Lawrence with his wife, Karen Lawrence. In fact, she is the first daughter born on Gary’s side of the family in half a century. Besides, he has two sons, Ben Lawrence and Blaine Lawrence, both older than Jennifer.

Currently, all three kids of Gary Lawrence are achieving success in their own chosen career paths. As mentioned multiple times, his daughter, Jennifer Lawrence, is a well-known entertainment personality who has performed in numerous blockbuster films to date. Till now, the Mother actress has won several awards and accolades, making Gary and his whole family notable among the people worldwide.

Similarly, one of Gary’s sons, Ben Lawrence, is in the tech business and serves as a managing partner at an IT company named Louisville Geek. Likewise, his other son, Blaine Lawrence, manages Camp HiHo, a day camp founded by his wife, Karen.

Moreover, Gary Lawrence is a grandad to five grandkids, three from his oldest son, Ben’s marriage with Meredith Lawrence, and two from Blaine’s marriage with Carson Lawrence. But his little girl, Jennifer Lawrence, still seems to be planning for a baby with her husband, Cooke Maroney.

One of His Daughter’s Movies Freaked Him Out

Jennifer Lawrence is famous for her roles in several record-breaking movies. One of them is filmmaker Darren Aronofsky‘s psychological horror film ‘Mother!‘, in which she portrayed a role of a young wife. Jennifer had warned her whole family about what they might see in that movie.

However, her dad, Gary, insisted on watching it, and as a result, it made him gasp multiple times during various scenes of his daughter in the movie.

Jennifer Lawrence described watching her father, Gary Lawrence, watching her movie ‘Mother!‘ on Late Night with Seth Meyers some years ago. She said that the scariest part for her dad was seeing the outline of her nipple a couple of times during various scenes in the movie.

Obviously, like all the fathers worldwide, Jennifer Lawrence’s father also must have been uncomfortable seeing too much of his daughter. But, that does not mean he disliked the overall movie. Gary feels pleased that his girl is winning the hearts of millions of people around the globe with her endearing performance.

They say one man’s loss is another man’s profit, but when a Louisville resident found an old ring in his old milk crate full of junk, he never envisioned that it would connect with him with a celebrity’s dad. A man named Timothy Kays found Jennifer Lawrence’s father, Gary Lawrence’s class ring, in a heap of junks. So, Kays called WDRB Newsroom, who helped find Gary.

Reportedly, Kays found the University of Louisville class ring in an old milk crate while cleaning his attic. The inscription inside the ring read Jennifer’s dad’s name ‘Gary Stephen Lawrence.’ Soon after Kays informed the WDRB newsroom team, they started searching for the owner, and it didn’t take them long to find the real match.

According to Gary, someone stole his ring forty years ago while he was playing in a basketball league over at Barrett Middle School. He expressed his happiness of finding his lost ring back and appreciated Mr. Kays and the WDRB team’s help.

Currently, Gary Lawrence lives a happy and peaceful life with his wife, Karen Lawrence, in Louisville, near his kids and grandkids. He also often accompanies his popular daughter, Jennifer Lawrence, at various red carpet events. Let’s hope we will get to see him often in public events in the upcoming days too.