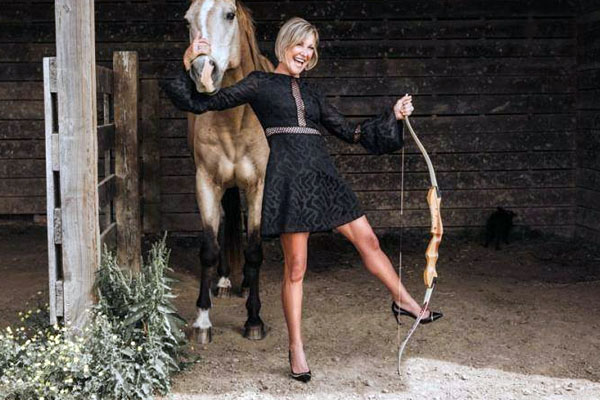 Karen Koch Lawrence is the mother of the renowned American entertainment personality, Jennifer Lawrence. She welcomed her only daughter, Jennifer, on 15 August 1990, with her beloved husband, Gary Stephen Lawrence, who she met while enrolled in the University of Louisville. Karen, with her husband, Gary, raised their daughter in a small town in Louisville, Kentucky. But at present, their little girl has come a long way and ruling the film industry with her charming acts.

With the rising fame of Jennifer Lawrence, her mom, Karen, is also gaining attention from the public. People are eager to know more about her personal and professional life, including how she helped her daughter gain stardom. So, here, without any delay, let’s get to learn some interesting facts about Jennifer Lawrence’s mother, Karen Lawrence, who founded a summer camp named Hi-Ho.

Karen Lawrence is a mother to three kids, including her famous daughter, Jennifer Lawrence, whom she and her family members call by the name Jen. With Jennifer as her youngest child, she has two sons, Ben Lawrence and Blaine Lawrence, who are already hitched and gaining success in their own chosen business lines.

While Karen’s daughter, Jennifer, is prospering in her career as an actress, her son, Blaine Lawrence, manages a summer day camp, Hi-Ho, which she founded several decades ago. Similarly, her other son, Ben Lawrence, works for an IT company named Louisville Geek as a managing partner.

All three of Karen Lawrence’s kids with Gary Lawrence are happily married. Her daughter, Jennifer Lawrence, married Cooke Maroney in 2020. Likewise, Ben is in a marital relationship with Meredith Lawrence and has three kids with her. Similarly, Karen’s other son, Blaine, is married to Carson Lawrence and fathers two kids with his beloved wife.

So, Jennifer Lawrence’s mother, Karen Lawrence, is already a granny to five joyful grandkids. However, she still wants to add more grandchildren to her family so that she can spend more time with them. We hope her daughter Jen will soon fulfill her wish and make her grandma of some more grandkids.

Founder Of A Summer Camp In Louisville

Aforementioned, Jennifer Lawrence’s mother, Karen Lawrence, is a founder of a day camp, HiHo, which her son, Blaine, handles at the moment. She started her play-focused camp near her residence in Kentucky so that campers can spend time in the summer activities. Mrs. Lawrence’s main aim to found the camp was to let the kids enjoy their holidays fishing, swimming, making arts and crafts, and playing with animals in their pet barn.

Sadly, Camp HiHo’s farm caught a devastating fire in 2020, making their main barn reduced to rubble and ashes. The fire destroyed an office space Karen’s son used and an apartment the Lawrence family often utilized. Moreover, it also encompassed the indoor riding area for children, the stalls for the horses, and many more. Thankfully, the pet barn, the lake area, the animal pastures, and other campsites with their farm animals remained unaffected.

The sudden mishap devastated the whole Lawrence family and the campers. But they did not give up. Soon after the incident, they began rebuilding the campsite with help and donations from their close ones.

Besides, Karen Lawrence is also one of the active members of the Jennifer Lawrence Foundation. Also, she often appears as a host at her daughter’s several initiations for social causes.

Moreover, the jolly mother of JLaw, Karen, is a board member for the Louisville Orchestra and the Kentucky Film Commission. Also, she is an advocate for children and stray animals in need of a forever home. Witty Karen even does comedies on stage to raise money for her family organization, Lawrence Foundation.

A Former Cheerleader At Her Alum

Being one of a few gymnasts of her community, Karen thought her community needed gymnastics as an after-school program. So, she brought her gymnastic classes to the schools. It was an alternative for parents as a replacement for using babysitters and running their kids to programs on weekends.

Later, Karen Lawrence expanded her gymnastics program by adding an art component, karate, and other fun activities. However, after her marriage and having children, she felt that her kids needed her more than anything in the world. So, Karen turned her focus from her after-school programs to her kids at home.

Supported Her Daughter To Become A Renowned Actress

Jennifer Lawrence often credits her mom, Karen Lawrence, for helping her pursue her career in the film industry. Though Karen was not keen about it at first, she eventually understood her child’s affinity towards acting. So, ever since she saw how happy her girl was to perform on stage, she began supporting her wholeheartedly.

Jennifer Lawrence did not want to star the 2012 American science fiction action movie, The Hunger Games, an adaptation of author Suzanne Collins‘ Hunger Games trilogy. Initially, she hesitated to accept the role of the main character, Katniss Everdeen. However, it was her mother, Karen Lawrence, who convinced her to take part.

So, Karen Lawrence always stands by her daughter’s side as one of her biggest supporters and motivators. We hope she will keep on stimulating her girl, Jennifer Lawrence, and her other kids as well to achieve more success in their career paths.