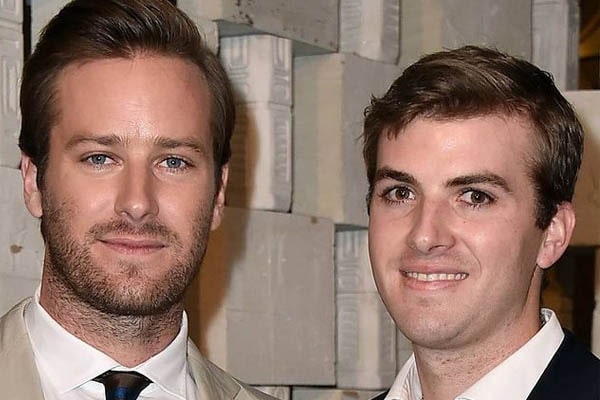 Armie Hammer is a renowned American actor widely famous for portraying the role of twins Cameron Winklevoss and Tyler Winklevoss in David Fincher‘s biographical drama movie The Social Network. For his performance on Fincher’s drama film, Hammer won the Toronto Film Critics Association Award in the Best Supporting Actor category. Besides, the handsome actor Armie is also famous for his role in several acclaimed films like The Lone Ranger, The Man from U.N.C.L.E, and Straight White Men. He is the former husband of the American entrepreneur and TV personality, Elizabeth Chambers.

Armie Hammer, who used to be in the media headlines for his charming performances, is currently in excess limelight concerning various abuse allegations and social media controversies. Following his notoriety, people are being interested in his family life as well. So, here, get to be familiar with Armie Hammer’s brother, Viktor Hammer.

Armie Hammer is the eldest son of a former loan officer, Dru Ann Hammer, and the famous businessman, Michael Armand Hammer. Viktor Hammer is his younger brother who arrived some years after his birth in Santa Monica, California. Later, they moved with their parents to the Cayman Islands for some years and again resettled in Los Angeles.

Armie Hammer’s brother, Viktor Hammer, prefers to live his life far away from the unnecessary reach of the media scrutiny. So, only a few details are available for the public about his childhood and educational accomplishments. What we know is that unlike his elder brother, Armie, he gave continuity to his education. Viktor is a graduate of Pepperdine University with a B.S. in Business Administration focusing on non-profit management.

Viktor Hammer is the great-grandson of the late American business manager Armand Hammer, most closely linked with Occidental Petroleum. His great-grandpa was also famous for his art collection and his close friendship with the Soviet Union. He was the business partner of his brother, Victor Hammer, on several business ventures, which includes the Hammer Galleries.

Armie Hammer’s brother, Viktor Hammer, is the honorary director of the Hammer Galleries, founded by his great-grandfather and managed by his future offsprings. Also, he is the board member of their family foundation, the Armand Hammer Foundation. Besides, Viktor even served as the vice-president, secretary, and treasurer of the Armand foundation for some period.

Financial Advisor Of The Aegis Group

Armie Hammer’s brother, Viktor Hammer, brings his years-long experiences in philanthropy to the Aegis Group at Morgan Stanley. He is serving as a financial advisor of Morgan Stanley, being based out of Franklin, Tennessee, for more than seventeen years now.

Viktor Hammer’s services as an advisor include financial planning services, portfolio management for businesses, individuals, and investment companies. Also, he provides pension consulting services, selection of other advisers, educational workshops or seminars, and many more. Currently, Viktor provides his service on many other institutional boards around Southern CA, including the LA’s Ulmer Institute. Also, he is an active member of LA and Santa Barbara philanthropic communities supporting local law enforcement organizations, Girls Inc., and the Boys and Girls Club of America.

Besides being an experienced businessman, Viktor is also an avid golfer, traveler and enjoys restoring homes, motorbikes, and vintage cars.

Viktor Hammer is in a marital relationship with Angelia De Meistre. As listed on The Knot, Hammer and Meistre tied their marital knot on 31 August 2013. Both of them attended the Pepperdine University. Hammer met his future wife, Angelia, during their summer after junior year in a Spanish class and fell for one another. It was Viktor who first asked for a date with Angelia at the Jonathan Club in Santa Monica. They dated for some years before deciding to take the wedding vows.

Armie Hammer’s brother, Viktor Hammer, and his wife, Angelie, currently reside in Charleston, SC. Both of them are passionate about animal rescue. So, they adopted a dog whom they named Juno from a shelter in Ventura County.