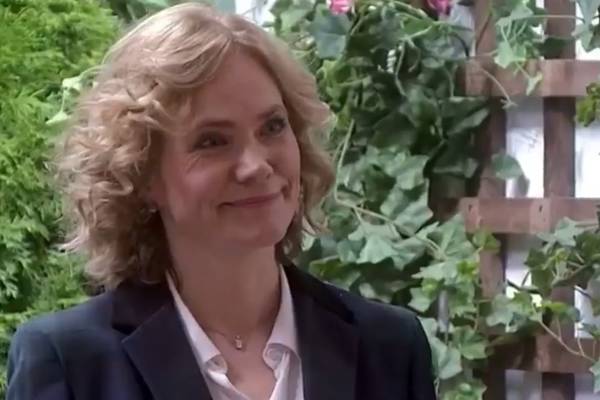 Abigail Lucy Cruttenden is a renowned Hollywood actress whose best works include The Theory of Everything, Not Going Out, and Sharpe. The blonde beauty has won the hearts of many with her acting skill and stunning appearance. Aside from her acting career, people best recognize her as The Lord Of The Rings actor Sean Bean‘s ex-wife.

Abigail moved on and married again after her marriage with Sean ended in divorce. At present, she enjoys a happy marital life that spans over two decades. However, because the actress rarely discusses her personal relationships, the public is unaware of her private affairs.

So, why don’t we peek into the lovelife of Abigail Cruttenden‘s husband, Jonathan R. Fraser, in this article? Let us also see if the pair have any children together.

Abigail’s marriage with Jonathan Fraser is no secret. The love-smitten pair married in December 2003 and have been together ever since. However, apart from this small piece of information, nothing has been revealed about Fraser’s lovelife with the Sharpe star.

Abigail Cruttenden’s husband has never attended any of the award ceremonies with her, and the press has yet to see the two together in public. Likewise, Jonathan prefers to avoid online networks and has no social media presence. Cruttenden’s partner is clearly a private person who does not want anything to do with the necessary drama that comes with being associated with a celebrity.

Jonathan Fraser and his wife have now been married for over two decades and live in West London, England. Despite their decades-long marriage, there have been no rumors or speculations about problems in their relationship. Therefore, it might be safe to presume that Abigail and her spouse live an extraordinary, lowkey life together.

It looks like the married couple will not be coming out with the details of their marital life any time soon. So, let us all wish Jonathan Fraser and his lover well and hope that he comes out more in public as time goes on.

Even though few Hollywood couples have made their romance last, the industry is known for having short relationships and failing marriages. One such failed marriage belongs to the Game Of Thrones actor Sean Bean and actress Abigail Cruttenden. Before marrying the love of her life, Jonathan R. Fraser’s wife was well-known for her relationship with Sean.

Sean and Abigail first met on the set of Sharpe, and the two then tied the knot on 22 November 1997. Bean’s daughters  Lorna Bean and Molly Bean also took part in his wedding. Not even a year later, the former couple welcomed their daughter Evie Natasha Bean in November 1998.

However, the pair divorced only three years after exchanging wedding vows. The reason for Abigail and Sean’s separation remains a mystery to date. Their daughter lived with Abigail Cruttenden’s ex-husband after their divorce.

Going through Evie Bean‘s Facebook we can see that she is in touch with her mother. So, it is safe to assume that even though she lived with her father after the divorce, Evie shares a close bond with her mom. Moreover, Abigail and Sean Bean’s daughter studied at the University of Bristol.

Apart from Evie, Abigail and Jonathan have a beautiful daughter named Merle Fraser. Still, there is no information about their daughter online as the married duo opted to raise her without the influence of the media.

As a result, apart from her name, there is little information on Jonathan’s daughter available on the internet. Merle is also not present on any social media platforms, so her whereabouts remain a complete mystery. Clearly, Merle, like Abigail Cruttenden’s husband, prefers to live away from the limelight.

Likewise, whether she has shown any interest in following her mother’s footsteps has not been disclosed. Still, Merle must be living a normal life and enjoying her time with her family.

So, let us wish Abigail Cruttenden and her family well and hope to learn more about them in the coming days.