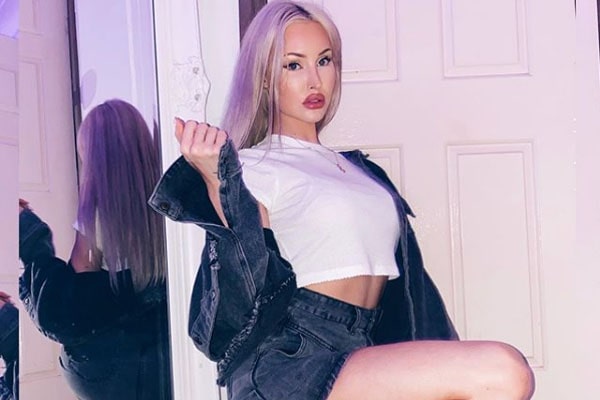 An Australian by birth, Alyce Madden was born in Sydney. She is currently pursuing a career as a makeup artist, in which she is thriving. After blatantly cheating on Hopsin with her personal trainer, the former love birds split.

However, Alyce was already pregnant during the couple’s fallout. Alyce Madden gave birth to Hopsin’s son in 2017, making Hopsin a father for the first time in his life. Well, we can see that Hopsin’s love life wasn’t that great.

Hopsin was in the news for his verbal fights with fellow rappers. The former “Funk Volume” rapper got into petty feuds with industry rappers. Hopsin’s diss tracks have pissed off so many rappers that it’s hard to keep track of every one of them. Hopsin took to his Instagram to “reveal” his ex-girlfriend Alyce’s “true nature,” describing the baby mama as “gold digger” and “plastic surgery b**ch.”

The time around, however, Hopsin released a couple of singles that showed his ex-girlfriend Alyce’s supposed “real side.”

Alyce, in turn, had reportedly denied Hopsin, access to his biological son. Unable to bear Alyce’s cruel actions towards him, Hopsin assaulted his then-girlfriend, Alyce Madden, in Sydney, Australia. Following a court hearing, Hopsin was sent to a Sydney jail to serve time. It’s clear that Hopsin was angry with his former lover for stopping him from hugging his little son.

The “Sag My Pants” rapper, Hopsin is a loving father, no doubt. The expert rhymer wants to see his little son and let the boy know that his father exists. If only his ex-girlfriend Alyce Madden would let his kid son meet his loving father.

How sad! In light of the past controversies with her ex-boyfriend Hopsin, Alyce Madden’s Instagram was set to private. But she has made her Instagram public at the moment. She seems to have recovered from the assault launched onto her by her former lover, Hopsin.

However, Madden is not all that bad, despite the terrible fallout with the “Undercover Prodigy” founder boyfriend. Madden’s bio on her official Instagram mentions about her being a “Mother” to her son, Zadey.

One thing’s for sure, and it’s that Alyce loves her son and is raising him with the utmost care. She makes sure that her son grows up in a comfortable environment in her Australia residence.

But it also looked like Hopsin had grown a soft spot for his baby mama as he has released a song titled “The Old us” where he raped about reconciling with his former partner.

Hopsin Had Also Written An Open Letter To Her

In Feb 2019, Hopsin posted a lengthy open letter to his ex-girlfriend, Alyce using Instagram. In the letter, he apologized for their break-up and the pain he had caused in their relationship. But it does not look as if the ex-couple would be getting back any sooner.

The two exes are probably happy with how their life is heading in a certain direction at the moment. But who knows, they might get back together because of their adorable son in the future as well.