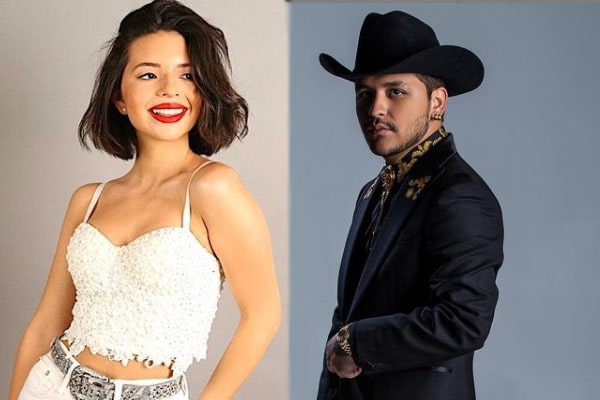 Young and beautiful Ángela Aguilar is the daughter of the Mexican music icon Pepe Aguilar and his wife, Aneliz Alvarez-Alcala. Besides gaining fame as the youngest child of Pepe Aguilar, Angela is a legend on her own. At 17, she is already ruling the heart of millions of music fans worldwide with her melodious voice as a Mexican-American singer. She initially rose to fame after performing the Mexican folk song ‘La Llorana‘ in 2018 at the 19th Annual Latin Grammy Awards.

One of the youngest artists nominated for American and Latin Grammy Awards, Ángela Aguilar was rumored to be dating her fellow Mexican singer, Christian Nodal, in the past.

So, is Christian Nodal still Ángela Aguilar’s boyfriend, or have both of them already moved on in their life? Find it out here.

As mentioned above, both Ángela Aguilar and Christian Nodal are award-winning Mexican music artists. Well, Nodal is the winner of a Lo Nuestro, three Latin Grammy, and two Billboard Latin Music Awards. Aguilar and Nodal, who have an age difference of five years, were reportedly in a romantic relationship back in December 2019.

Some of the online sources noted that Ángela Aguilar conquered the heart of Nodal, and he was in love with her in July 2020. However, going through the social media handles of Aguilar and Nodal, there are no hints of them falling for one another to date. Instead, the one who stole the heart of Christian was the Mexican singer Belinda Peregrín Schüll. The two have been dating since early 2020. Nodal made his relationship with Belinda official by sharing a video of him kissing her on a boat on his Instagram page in August of the same year. They are very much in love with one another.

So, it is clear that Christian Nodal is no more Ángela Aguilar’s boyfriend, or probably they never were in a relationship. When there were rumors of Aguilar dating Nodal, she was just sixteen and possibly was not ready to mingle.

Aguilar Is Single At The Moment

After the end of the gossips of Ángela Aguilar dating Christian Nodal, she is currently living a peaceful life and enjoying her late teen years as a single woman. Yes, Pepe Aguilar’s daughter, Ángela Aguilar, is single and has no plans to mingle at the moment.

In August 2020, one of Angela’s Instagram followers asked why she does not have a boyfriend on her Instagram story. In reply, she said that it is because she does not want to be in a relationship. Aguilar added that she just wants to focus on her family, work, and friends at the moment. Moreover, she wants to love herself and strives to be the person she wants to be for herself. Angela also said that she might have someone special in the future, but she guaranteed to focus on being happy alone at that time.

Coming to the present, Ángela Aguilar is still possibly single and focusing on her music career. On top of that, she is just seventeen, and she has lots of time to think about having a boyfriend. But for now, music and her family are her love.

Some months ago, there were rumors on the internet that Ángela Aguilar was pregnant. A couple of online sources even photoshopped her photo and made her belly look like she was expecting twins. However, later, Angela made everyone clear about the rumors and claimed that she was never pregnant via a video titled ‘Google Rumors’ on her YouTube channel.

Moreover, Ángela Aguilar regularly uploads her photos on her Instagram page. It shows that she has never undergone any physical changes to point out a baby bump that could result in gossip about her pregnancy. Hence, Angela was never pregnant.

Furthermore, through the same video titled ‘Google Rumors,’ the young Mexican singer opened up about her relationship with Christian Nodal. She said that she and Nodal were spotted together because they were going to release a song. The duo’s new song,’ Dime Cómo Quieres,’ is already on the market. You can watch its official video on Christian Nodal’s YouTube channel.