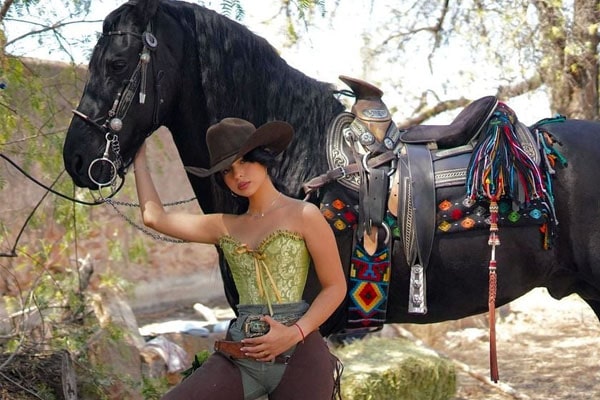 Ángela Aguilar earns from her career in the music industry and her other business ventures. Image Source: Ángela Aguilar's Instagram.

Ángela Aguilar is the youngest child of the Mexican-American singer-songwriter Pepe Aguilar, with his long-time wife, Aneliz Álvarez-Alcalá. Besides being the daughter of the legendary singer, Ángela has succeeded in gaining fame on her own as a Mexican-American singer. With her melodious singing skill, she has been able to garner fame worldwide. Along with popularity, Ángela Aguilar is also earning an impressive sum of money through her musical career.

Ángela Aguilar Net Worth And Earnings

The Aguilar Dynasty’s youngest offspring, Ángela Aguilar, followed her dad and grandparents, Antonio Aguilar and Flor Silvestre‘s footsteps in the music industry. Born into a family of such legendary music artists, Ángela began performing alongside her father and brother, Leonardo Aguilar, on musical tours at a young age. She and her brother released their first album, ‘Nueva Tradición,’ when she was just nine years old. Since then, Aguilar has participated in several music festivals and shows and released a couple of albums to date.

The rising Mexican singer Ángela Aguilar’s net worth is estimated to be well over the $1 million mark at the moment. Here, find out how she managed to add such a hefty amount to her fortune.

Earnings From Her Music Career

Aforementioned, Ángela Aguilar has already established herself as a notorious Mexican-American singer at the age of 17. As a singer, she has performed in several music festivals and award ceremonies. Moreover, Aguilar has released a couple of albums to date, including Primero Soy Mexicana, Baila Esta Cumbia, and her first album, Nueva Tradicion. Here are the prices of the audio CDs of Ángela Aguilar’s albums.

Besides, Ángela Aguilar adds thousands of dollars performing in several music festivals and touring throughout Latin America and other countries with her brother and dad. According to Business Insider, a well-established musician earns maximum money from musical tours than streaming and album sales. So, undoubtedly, Ángela is also adding up a big amount to her bank balance from her musical tours.

Ángela Aguilar has an official YouTube channel on her name, which has over 2.60 million subscribers at the moment. Aguilar created her channel in 2018, and within three years, her videos have gained nearly 500 million views. Hence, Aguilar is making a good sum of money from YouTube also.

Besides, Ángela Aguilar is also available on Spotify, where she has over 5 million monthly listeners. So, she might be earning some amount from Spotify and other streaming sites as well, to add to her rising net worth.

Aguilar’s Income From Her Online Store

Like many other notorious artists, some portion of Ángela Aguilar’s revenue comes from selling merchandise and her own side business. She owns an official store in her name where people can buy the latest accessories, clothing, music CDs, and many more. Some of the items available on Ángela Aguilar’s online store, along with their price, are listed below.

In this way, Ángela Aguilar is earning several dollars from her musical career and other ventures. Ángela Aguilar’s net worth is giving her all the luxuries, which she deserves for her dedication to her career. Aguilar seems to be enjoying her life to her best with several foreign tours, designer clothes, and many more. Though she currently lives with her multi-millionaire dad, it looks like she will soon have enough bank balance to buy a luxurious mansion on her own.

For now, Ángela Aguilar is just in her late teens and thriving on her career. So, she has enough time to gain more success in the field and earn money from it. We wish her luck for her upcoming days.