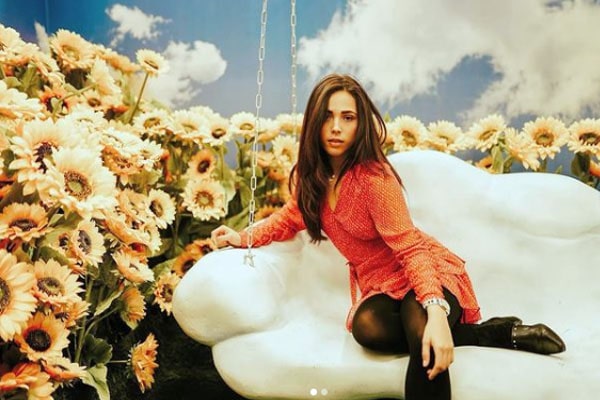 Pepe Aguilar is a world-renowned Mexican-American singer-songwriter, businessman, and actor. To date, the versatile star has sold over 15 million records worldwide and released 26 albums. He is the first music artist to initiate a new technology in video clips, launching a musical with 360° video technology of his song ‘Maria.’ Aguilar is the leader in the fusion of the most famous Latin music genres: Mariachi and Pop and the most awarded regional Mexican artist in the industry.

The talented Pepe Aguilar is a family man with a loving wife named Aneliz Aguilar Alvarez. Together, they are enjoying their happily married life since 1997 and are parents to three grown-up kids, two beautiful daughters, and a son.

Here, take a look at one of Pepe Aguilar’s daughters, Aneliz Aguilar, who is passionate about fashion and arts.

Both of Aneliz Aguilar’s siblings are in the music industry and have established themselves as popular Mexican music artists. They used to accompany their grandpa, Antonio Aguilar, and their father on several musical tours throughout Latin America. The 5 feet 5 inches tall Aneliz also performed with them in some concerts during her childhood. However, after settling in at Oaks Christian High School, she began to participate in competitive gymnastics and swimming.

Aneliz’s younger siblings are currently pursuing their careers as Mexican singers, while Aneliz’s focus is on the fashion industry and modeling.

Pepe Aguilar’s daughter, Aneliz Aguilar’s dream was to open a restaurant on her own ever since the age of eleven. Eventually, she even created her own healthy food truck. Besides, Aneliz is equally passionate about modeling and fashion line. Currently, she is an Instagram star with over 625K followers and gets more than 48K likes on her photos.

Many think that Aneliz Aguilar got such a huge fan following on her Instagram due to her family’s stardom. But, more than that, she became a social media star in her own right. Aneliz has proved herself as an eligible and active young lady on her Instagram page by flaunting her gorgeous and fashionable looks. We can see her keeping up with the latest trends, showing how much she loves to play with her outfits and accessories.

Seeing Aneliz’s pictures boasting her slender figure and her great style, it seems like she aims to be an actress or a model. But that does not mean she does not have singing skills. She has a great voice which she inherited from her dad, granddad, and grandma, Flor Silvestre. However, it seems like she is currently not ready to be in the music industry. Rather, Aneliz seeks to pave her own career path and rise to stardom individually without relying on her parents’ and siblings’ fame.

Besides two biological siblings, Aneliz Aguilar has a half-brother named Jose Emiliano Aguilar from her father’s first marriage with Carmen Trevino. Emiliano is the eldest child of Pepe Aguilar, born in 1993, while he had not even met Aneliz’s mother.

Aneliz Aguilar’s half-brother, Emiliano, was charged for smuggling four Chinese immigrants in 2017, for which he served 18 days in jail and was later released on bond. He spent six months in a rehabilitation center and three years out of the United States. Currently, he seems to be living a sober life with his family in Los Angeles. Though Aneliz and Emiliano are from different mothers, they share a great bond as brother and sister and love spending time together.

So, for now, Pepe Aguilar’s daughter, Aneliz Aguilar, focuses on the fashion industry. She is earning an impressive number of fans being a social media fashionista. We hope we might soon see her shining out in other fields as well.

Aneliz is a Spanish name that means powerful and complete.