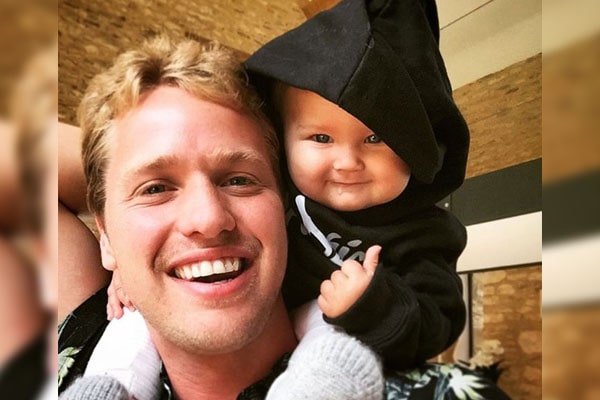 Sam Branson is the son of the English business tycoon, Sir Richard Branson, with his long-time wife, Joan Templeman Branson. Besides being in the limelight as Richard Branson’s son, Sam is a qualified meditation and Yoga teacher. Moreover, he also lends his hand to his family business, the Virgin Group as a member of its management team. Besides, the social activist, Sam Branson, is the co-founder of Big Change, a non-profit organization, and the HiddenLight Productions, a global production studio.

A passionate musician, Sam Branson is currently in a marital relationship with Isabella Calthorpe, an English actress, model, and socialite. Together, the gorgeous couple has two kids, including daughter Eva-Deia Branson.

Here, learn some more about Sam Branson’s daughter, Eva-Deia Branson, and how she is spending her childhood.

Eva-Deia Branson is the first-born of the celebrity couple, Sam Branson and Isabella Calthorpe. The married pair welcomed their little girl, Eva, on 19 February 2015 at 4:39 pm. She weighed 7lbs 14oz at the time of her birth. The overwhelmed dad for the first time, Sam Branson, announced the happy news with a snap of his newborn girl on Instagram, revealing her name and date of birth.

Eva-Deia Branson’s granddad, Richard Branson, was in the British Island when he had an instinct to fly back to London, though his grandkid could have arrived anytime in the next week. So, he and his wife, Joan, reached the hospital just a few hours before their granddaughter’s arrival. Like Sam, he also could not stop himself sharing the news of his little tot’s arrival via his Instagram and Twitter.

Furthermore, Sam Branson’s daughter, Eva-Deia Branson, became big sister after her brother Bluey Rafe Richard Branson joined the family on 18 January 2017. Both of the adorable kids of Sam Branson enjoy each other’s company. They love exploring nature, having fun doing toddler activities, and traveling to various destinations with their family.

Eva-Deia’s parents are quite protective regarding her everyday life. They seem to prefer to keep her far from the media limelight so that their stardom does not affect their daughter’s life. So, there are very few pictures and details of beautiful Eva-Deia Branson available for the public. However, being a grandchild of a billionaire, she might be spending her childhood full of luxuries and desires fulfilled with a click of her finger.

Named After Her Paternal Great-grandma

Sam Branson’s daughter with Isabella Calthorpe, Eva-Deia Branson, got her name after her great-grandma, Eve Branson, Sam Branson’s grandmother. Similarly, her parents gave the name Deia after one of the most beautiful villages in the world, Deia in Mallorca. Eva-Deia’s family have spent many happy times in Deia as a family at their little Hotel La Residencia.

Furthermore, Deia is also the place where Eva-Deia’s grandpa, Richard Branson’s ex-wife, Kristen Tomassi, lives with her new husband, Axel Ball. Mr. Ball is also one of the major contributors to their Hotel La Residencia.

If you want to make an impact on the things that matter to you, draw circles around what you care about: https://t.co/PO3chShlYx pic.twitter.com/XL7Fezm7kn

The proud grandfather, Richard Branson, was so delighted to share the wonderful news with his fans. He shared how lucky he and his wife, Joan felt to have three healthy grandkids in the space of two months on his social media handles. Soon after Eva-Deia went home from the hospital to meet her cousins, her family spent a glorious day together with all three of them. According to Richard, it marked the beginning of a new life for them all.

Besides Artie and Etta, Eva-Deia Branson has a younger cousin sister, Lola Snow Templeman Andrewes. The youngest member of the Branson family, Lola, joined the family on 29 December 2018.

The female given name Eva is of Hebrew origin, which means life or living one. Similarly, Deia means Joy: goddess.