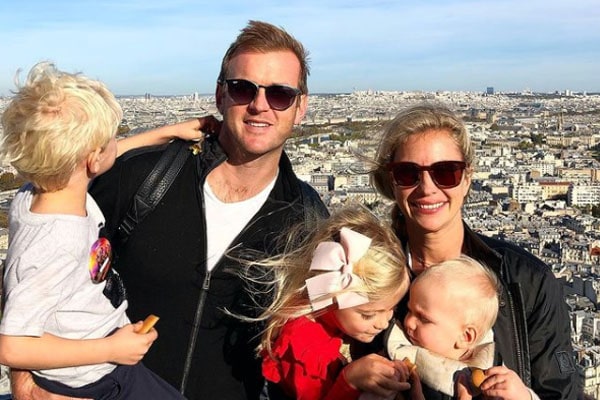 Holly Branson is the eldest child of the British business mogul, Sir Richard Branson, and the sister of actor Sam Branson. Besides being Richard Branson’s daughter with his wife, Joan Templeman Branson, Holly is also a businesswoman and a philanthropist. Currently, she is the chief purpose and vision officer at her family business, Virgin Group Ltd., and the chair of Virgin Unite, a charity organization. Moreover, Holly is the founder of Big Change Charity, a foundation established to help ensure that all young people are set up to thrive in life.

Born on 21 November 1981, Holly Branson is in a marital relationship with shipbroker Freddie Andrewes. Together, the happily married pair are blessed with three adorable kids. So, here, meet all three of Holly Branson’s children, Artie Andrewes, Etta Winter Andrewes, and Lola Snow Templeman Andrewes. Also, find out how the beautiful husband-wife duo is raising their little ones.

Holly Branson’s son, Artie, and daughter, Etta, arrived earlier than the due date at 33 weeks by emergency cesarean after their mom developed pre-eclampsia. They were placed in separate incubators for three days. However, as soon as they came out of NICU, the newborns slept in the same cot together for four months. Their parents provided them a separate cot only after they began rolling over and waking each other up.

The adorable kids of Holly and her husband, Fred Andrewes, Etta, and Artie, must feel fortunate to celebrate their birthday and their parents’ wedding anniversary on the same day. Although their sixth birthday was amidst the COVID-19 pandemic, their mom and dad did not leave a single stone unturned to make it how they expected it to be. Artie, who is obsessed with Lego, got a full-sized Lego outfit while Etta got a pink unicorn as birthday gifts from their parents.

Lola Snow Templeman Andrewes is the third child of Holly Branson with her loving husband, Freddie Andrewes. It seems like December is the lucky month for Holly and Fred. Their daughter, Lola joined the Andrewes brood on 29th December 2018, the month they married and had their first kids. The overwhelmed momma, Holly, announced the arrival of her cute little girl via her Instagram page. She shared the picture of her newborn with her husband Fred and their twins. Her father, Richard, also took to Instagram to congratulate his daughter and son-in-law.

Holly Branson mentioned her daughter, Lola as a miracle baby as she and her partner, Fred, struggled a lot for several years to have her. Lola’s parents began trying for another baby in 2017. But they went through several struggles with conceiving and failed in an attempt at IVF in December of the same year. They thought that their wish to have another baby wouldn’t happen for them. But, after some months, Holly conceived naturally and became pregnant with Lola.

Holly Branson’s daughter, Lola, got her middle name Templeman after her maternal grandmother’s maiden name. Similarly, she got the name ‘Snowy’ from her big sister, Etta, whose middle name is winter.

The cute toddler, Lola, is close to her siblings, mainly with her sister, Etta. Her parents often post pictures of Lola and her siblings having a great time together on their respective Instagram. Going through the posts uploaded by her parents, it looks like her favorite fruit is Avocado. She had her first haircut just a few days after her second birthday in 2020.

Holly Branson’s Children Are Having A Great Childhood

All three of Holly Branson’s children are growing up well and enjoying their childhood to their best. Their loving and caring parents, Holly and Freddie, are also doing their best to give them a great childhood. The Andrewes family often goes on family vacations during their holidays. Although the current COVID-19 pandemic might have affected their plans to go to some travel destinations, they seem to be having fun doing creative works and learning new things staying at home.

Gone fishing – lockdown edition. For everyone in the UK, how are you keeping the kids busy during this second lockdown? pic.twitter.com/hZwohFgW1m

Holly Branson’s kids with her husband, Fred, Artie, Etta, and Lola, enjoy spending their free time in nature. They are fond of going fishing, boating, and swimming with their parents. Also, the little ones love doing workouts with their dad at home.

Overall, Holly Branson’s kids have a great childhood. They are fortunate enough to have parents who always keep them as their main priority keeping everything aside. We hope they will grow up to be a successful person like their parents in the upcoming days.