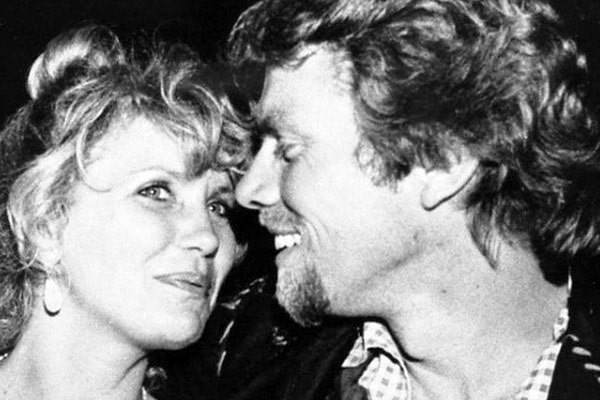 Joan Templeman Branson is a Scottish lady who rose to fame after marrying the world-known business tycoon, Sir Richard Branson. Also known as ‘Lady Branson,’ Joan Templeman is the daughter of a ship carpenter. She grew up in the largest city of Scotland, Glasgow, with her six siblings. Before finding fame, Joan was a normal girl and did various jobs, including nude modeling, to support her finances all throughout.

Here, learn more about billionaire Richard Branson’s wife of over thirty years, Joan Templeman Branson, who is the primary reason behind Richard’s success. Also, know the secrets behind their successful marriage.

Joan Templeman met the true love of her life, Richard Branson in 1976 at the live-in recording studio Branson built for Virgin Records. Richard makes up his mind about someone within 30 seconds of meeting them, and he fell for Templeman the moment he saw her. According to Branson, Templeman was a down-to-earth lady, and he quickly realized she would not be impressed by his usual antics.

When Joan met Richard, she used to work in an antique shop, Dodo, in Notting Hill. It was close to Richard Branson’s Virgin office at Vernon Yard. Though Branson fell in love with Templeman at first sight, Joan was not initially impressed with him. So, to win over his lady love’s heart, he used to visit the antique shops near the store where she worked. Branson even befriended Joan’s friends to catch her attention.

Finally, one day, Richard Branson made a plan to persuade Joan to come away with him for a weekend. So, he pretended he wanted to buy an island and called an estate agent, who provided him two tickets to fly to the island. He called Joan and offered her the second ticket, which she accepted. The pair flew off to the island, now called Necker Island, the island where the couple lives.

At the time Joan and Richard met, both were in a marital relationship. Reportedly, Richard Branson’s wife, Joan Templeman, was married to Nazareth musician named Ronnie Leahy while Branson was with the American architecture, Kristen Tomassi. Eventually, Branson and Templeman divorced their then-spouse to marry each other and are together ever since.

Married To Sir Richard Branson Since 1989

After falling in love with Richard Branson and divorcing her first husband, Joan Templeman moved to Little Venice, where she lived with Branson in his houseboat. Eleven years after living in courtship, Branson finally proposed his love, Joan, for marriage. They organized their grand wedding on 20 December 1989 at the same Necker Island, which Richard bought to be close with Joan in the initial days of their affair.

Recently, Richard Branson became the first person to travel to space on a supersonic space plane, developed by one of his companies, Virgin Galactic. He rode into space with his three fellow crewmembers, Beth Moses, Colin Bennett, and Sirisha Bandla, and pilots Michael Masucci and Dave Mackay. As Branson has already experienced how it feels to be in space, he might also take his beautiful wife, Joan also in space someday. It might also add more romance to their life.

It has been over four decades since Joan and Richard are together, and over three decades, they married. Still, the love between these two is as fresh as new. On top of that, the arrival of their kids in their life has strengthened their relationship.

Joan Templeman is a mother to two kids with her long-time husband, Richard Branson. Both of their children, daughter Holly Branson and son Sam Branson, were born before their marriage. Templeman gave birth to Richard Branson’s daughter, Holly, on 21 November 1981. Similarly, their son, Sam, arrived on 12 August 1985.

Joan Templeman and Richard Branson had one more child before the birth of their two kids. They had a daughter named Clare Sarah Branson, who was born three months prematurely as Joan had an attack of appendicitis. Though it was a false alarm, it brought early labor, and their first child arrived at just 25 weeks in 1979. The couple hoped and prayed that the hospital would keep Clare alive, but sadly their little girl died in a hospital incubator when she was just four days old.

Both kids of Joan and Richard Branson are currently members of their family business, the Virgin Group. They are also involved in philanthropic works like their parents and are married with children at the moment. Holly is in a marital relationship with Freddie Andrewes and has three kids with him, Etta Winter Andrewes, Lola Snow Templeman Andrewes, and Artie Andrewes. Likewise, Sam has two kids, Bluey Rafe Richard Branson and Eva-Deia Branson, with his wife, Isabella Calthorpe.

Reasons Behind Her Long-lasting Marriage With Richard

There is a saying that behind every victorious man, there is the hand of a great woman. It is applied in the life of Branson too. Richard Branson’s wife, Joan Templeman, has always stood by his side mentally, spiritually, and emotionally. She is her husband’s rock, confidant, and guiding light, which is one of the main reasons behind their blissful marriage.

I often make up my mind about someone within 30 seconds of meetings them. When I met Joan 44 years ago today, it was love at first sight: https://t.co/wIthVuh9bD pic.twitter.com/1wKtmVNML9

While talking to Page Six magazine, Richard Branson said that for a long-lasting relationship, one has to work on it, stay consistent and never give up. It has been over four decades since Branson and Templeman are deeply in love with one another. And, still, Branson continues with his romantic gestures to ensure his partner, Joan, knows how much she means to him.

Having Joan by his side, Richard has had the courage to accomplish many things others would deem impossible. He is able to take risks, which he probably would not have dared to make without his wife’s support and love. In other words, Richard’s healthy relationship with Joan itself is the reason behind his family’s massive success.

Hence, the love, support, understanding, and trust between Joan Templeman and Richard Branson is the secret behind their strong and deep-rooted marriage. We hope their relationship stays as robust as it is now till their last.