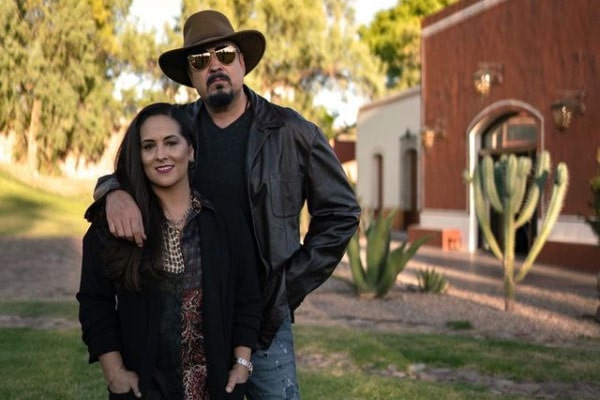 Pepe Aguilar, the well-known Mexican-American singer-songwriter, has sold over 15 million albums worldwide to date. Aguilar has been awarded several accolades and awards for his contribution and hard work in the music industry. He is the winner of four Grammy, five Latin Grammy, and nineteen Lo Nuestro Awards. Moreover, the leader in the fusion of the most popular Latin music genres, Mariachi and Pop, Aguilar has also earned a star at the Hollywood Walk of Fame on 26 July 2012.

Besides being a successful music artist and businessman, Pepe Aguilar is a family man with a lovely partner, Aneliz Aguilar Alvarez. Many online sources claim that Aguilar is no more together with Aneliz. However, it seems like they are still living a happy life together as husband and wife.

Married To Pepe Aguilar Since 1997

Independent producer of Mexican music, Pepe Aguilar, exchanged his wedding vows with his lady love, Aneliz Alvarez-Alcala in 1997, in a private ceremony. Though they did not involve any media people in their marriage ceremony, they might have celebrated it with their close ones in a grand ceremony. Pepe Aguilar’s marriage with Aneliz Aguilar is his second marriage. Before Aneliz, Aguilar was in a marital relationship with actress Carmen Trevino.

The beautiful married pair, Pepe and Aneliz, are still together, sharing immense love and care for one another. Their social media posts on their respective handles prove that they are still so much in love with one another and are happy with their marital life.

Pepe Aguilar at times upload photos of his beloved wife with their dog on his Instagram page. He expresses his love for his wife, mentioning her as his life in the captions. Similarly, Aguilar also shares pictures with his wife and their kids and the family looks pleased together. Talking about Pepe Aguilar’s wife, Aneliz Alvarez-Alcala, she often shares photos and music videos of her husband showing her love for her better half.

Hence, Pepe Aguilar and his spouse, Aneliz, are still together as husband and wife. They are perfectly content with their married life. On top of that, the presence of their three kids has added extra strength and bonding in their romantic relationship.

The daughter-in-law of Antonio Aguilar, Aneliz, is a proud momma to three gorgeous kids with her long-time husband. Among her three kids, Aneliz Aguilar is her first child with Pepe, born on 7 April 1998. Similarly, their second child, Leonardo Antonio Aguilar Alvarez, arrived on 15 August 1999. Finally, Pepe and Aneliz’s third child, daughter Angela Aguilar Alvarezor or Angela Aguilar completed their family on 8 October 2003.

All three of Pepe Aguilar’s children with Aneliz Aguilar are finding success in their own chosen career paths. Their eldest, Aneliz, is famous on social networks as a fashionista. Similarly, their other two kids, Leonardo and Angela, chose to be in the music industry like their dad and both are notable Mexican singers at the moment.

Furthermore, Aneliz Aguilar Alvarez is a step-mom to Pepe Aguilar’s son, Jose Emiliano Aguilar, from his previous marriage. US authorities arrested him for trying to smuggle four Chinese immigrants in 2017. Emiliano reunited with his family only in 2019 after $15K bail and six months of rehabilitation. Moreover, he served his three years probation in the US and finally is together with his family at the moment.

Pepe Aguilar did not only suffered from his son’s arrest in 2017; he even had to go through a terrible incident of his sweetheart, Aneliz, in the past. He revealed some details on Aneliz’s kidnapping along with one of his brothers in an interview with host Mario Lopez in 2013.

Pepe Aguilar said that he was horrified when he called Aneliz, and she did not respond. Finally, when she picked up his call, she told him something that made no sense. He added;

“It was the kidnapping that they’re calling them “express kidnappings.” They kidnap you and put you in the trunk of your car, just drive you around on your car, take your money, go to the ATM to get all the money you have, and then drop you in the middle of nowhere after 4-5 hours.”

Fortunately, nothing bad happened to Pepe Aguilar’s wife and his brother as well. Well, Pepe was happy that the kidnappers did not do any physical harm to his wife, and she is with him living happily and taking care of their kids as a homemaker in New York, USA.

We wish Pepe Aguilar and his wife, Aneliz Aguilar Alvarez’s marital relationship keeps on being stronger with each passing time. May they enjoy each other’s company till their hair turns grey.