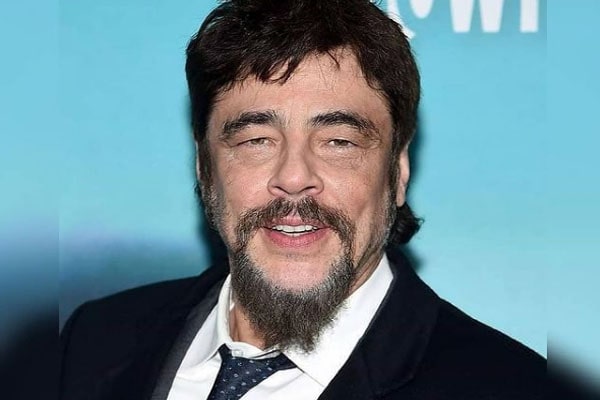 Benicio Monserrate Rafael del Toro Sanchez, simply Benicio Del Toro, is a notable Puerto Rican producer and actor. Del Toro is the winner of several accolades and awards, including the Golden Globe Award, Academy Award, and BAFTA Award. Moreover, he won the prestigious Screen Actors Guild Award for his performance as a morally upright police officer Javier Rodriguez in the 2000 movie Traffic. Also, Del Toro is famous for his blockbuster roles in the films such as The Usual Suspects, Basquiat, Fear and Loathing in Las Vegas, and many more.

The nominee of the Primetime Emmy Awards for portraying the role of Richard Matt in the miniseries Escape at Dannemora, Benicio Del Toro, has dated a couple of ladies to date. But, the question is, ‘Who got the privilege to be Benicio Del Toro’s wife?’ Here is what you need to know about his marital life, his only child, and the child’s mother.

Who Is That Lucky Wife Of Benicio Del Toro?

While most of the celebrity friends of the 54 years old actor Benicio Del Toro are rejoicing their marital life, you might be surprised to know that Benicio has not walked down the aisle to date. However, he shares a daughter, Delilah Del Toro, with Kimberly Stewart, the daughter of the rock icon Rod Stewart.

Benicio Del Toro dated the famed TV personality and fashion designer Kim Stewart for a while in 2010. It is when Stewart became pregnant with Benicio Del Toro’s daughter, Delilah. A source claimed that after conceiving Delilah, Kimberly hoped to become Benicio Del Toro’s wife and live happily ever after with the actor.

However, Del Toro just considered her as his fling. After learning about her pregnancy, Benicio denied marrying Stewart and being in a relationship. But, he said that he would support the baby.

Kimberly and Benicio Del Toro’s daughter, Deliah, arrived in August 2011 weighing 8 lbs 9 oz and measuring 22 inches long. Though the parents-to-be were no longer together at the time, Del Toro was by Stewart’s side during labor. Delilah is the first grandchild of Rod Stewart and his ex-wife, Alana Stewart. Besides sharing a great bond with her grandparents, she is close with Rod Stewart’s current wife, Penny Lancaster, and their sons Aiden Patrick Stewart and Alastair Wallace Stewart.

After the birth of Delilah, Benicio Del Toro’s ex-partner, Kimberly Stewart, reported to Star Magazine that she wanted to have another child with Del Toro. She wanted to give Delilah a full-blood sibling with Del Toro as she could not imagine having a kid with another man. But, sadly, the two neither married nor had another child together.

Although Benicio Del Toro split with his baby mama, Kimberly Stewart, back in 2011, the two are still friends and raise their only daughter, Delilah. Both the actor and the fashion designer have taken an active role in taking care of their child.

In 2012, the estranged partners Benicio and Kimberly appeared together with their little girl at a private residence. Later, in 2016, they were again seen in public having a great time with Delilah at the California Science Center in Los Angles. Seeing them together playing and having fun together with their child shows clearly that Kim and Benicio are really ideal parents to their child despite their break-up.

While talking to the HELLO magazine, Kimberly said that the arrival of Delilah in her life helped her get out of all the partying. Since her daughter with Del Toro was born, she became a stay-at-home mother and loved every second with her. Kim, who has the primary custody of Delilah, has even passed on her stylish looks to her little princess. In 2013, the mother-daughter duo was spotted together in LA wearing stylish outfits before Deliliah went to pre-school.

Furthermore, the arrival of Delilah has forced Benicio Del Toro to have patience. He learned the importance of compromising and even kneeling when his child throws a tantrum at him. As his daughter stays with her mom, he gets to meet her occasionally. But when they meet, they make it worthwhile having fun together visiting parks and going for a father-daughter date. However, he always makes sure the media people do not ruin his quality time with his daughter Delilah.

Although the Oscar-winning actor Benicio Del Toro is reportedly single, he dated a couple of beautiful ladies in the past. Before meeting the mom of his daughter, Kimberly Stewart, Del Toro was allegedly in an affair with actress Catherine Keener for a while in 2008. But, the gossips about their relationship faded away with time.

Moreover, Del Toro was in a romantic relationship with Sara Foster for a while in 2004. Despite their age difference, they dated for two years and eventually parted their ways away in 2006. Similarly, according to sources, Benicio Del Toro dated several celebrity ladies, including Scarlett Johansson, Sophie Dahl, Heather Graham, and many more. Once, the fashion designer and actress Lindsay Lohan also admitted Benicio as one of her many lovers.

Furthermore, some online sources claim that Benicio was engaged to Valeria Golino in 1988. However, she also did not become Benicio Del Toro’s wife. The rumored engaged partners, Del Toro, and Golino were in a live-in-relationship for four years and separated in 1992.

Currently, Benicio Del Toro is enjoying his single life. But we hope to hear the news of his marriage soon.