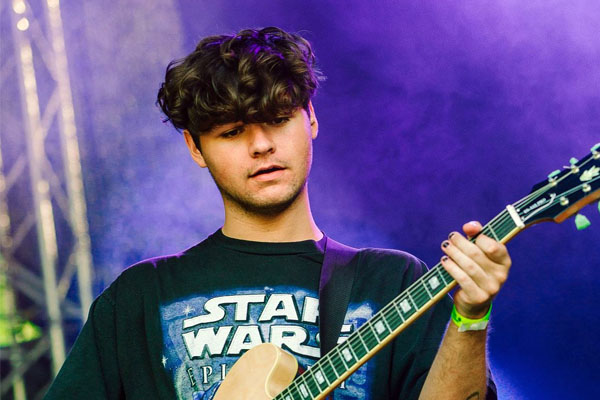 Currently, many rock-music fans worldwide are curious to learn more about Jakob Danger, whose fame is rising with each passing day. So, here are some fascinating facts about the budding musician Jakob Danger.

Jakob Danger is the son of Billie Joe Armstrong with his long-time wife, Adrienne Armstrong, who currently runs a clothing and home goods store. The happily married pair, Billie and Adrienne, gave birth to Jakob Danger on 12 September 1998 in Oakland, California. According to Jakob’s birth date, his birth sign is Virgo.

Jakob Danger’s parents, Billie Joe and Adrienne, tied their marital knot on 2 July 1994 in their backyard, which lasted for only five minutes. Though his mom and dad’s wedding ceremony was short, it represented many different religions.

Reportedly, Jakob’s parents met for the first time at a concert in 1990 via their mutual friend, Erica. They started seeing each other soon after their first meet and started dating later, followed by their marriage in 1994. Since then, the romantic couple is adoring their togetherness and living happily with their two kids, Jakob Danger and his brother, Joseph Marciano Armstrong aka Joey Armstrong.

As hinted above, the 23-years old Jakob Danger has an elder brother named Joseph Marciano, also known by the name Joey. His big brother, Joey, arrived in this world, making Billie and Adrienne parents for the first time on 28 February 1995. According to sources, Adrienne discovered that she was pregnant with their first child just a day after their nuptials in the backyard.

Like their famed dad, Jakob Danger’s brother, Joey also chose to be in the music industry while growing up. Currently, he is the main drummer for the band SWMRS, initially Emily’s Army. Joey founded the band after he and his fellow band member, Cole Becker, watched the musical-comedy School of Rock.

Also, Joey did drums for his family band The Boo’s 2011 self-titled EP. The EP had four songs where Billie and Jakob provided guitars and bass, and Adrienne was the singer.

Carrying On His Father’s Legacy

As the saying goes, ‘Apple does not fall far from the tree,’ Billie Joe Armstrong’s son, Jakob Danger, also inherited his father’s musical abilities while growing up. Music runs in his blood, and currently, he is proving it to the billions of music fans worldwide.

For some years, Jakob is showing his musical skills via the band Ultra Q, formerly Danger!. It was also named Mt. Eddy before Jakob, and his band members renamed it Ultra Q in 2019. He started the band when he was like 16 or 17. And, then, the rest of his band members were even younger than him.

Jakob Danger and his band debuted their first single titled ‘Redwood‘ as Ultra Q in 2019. Before that, when their previous band, Jakob Danger, was still around, they released a self-titled debut EP out in 2017. They released the EP via Burger Records after posting a few songs on SoundCloud and YouTube.

Lately, Jakob and his Ultra Q band members are working hard on recording and writing more music. And, though they have already started playing a few shows, they wish to go touring a lot and play many more shows. So we hope his wish will be fulfilled soon and hope to hear and see him achieving success in the industry just like his celebrity dad.

Performed A Cover of A Song With His Dad And Brother

Billie Joe Armstrong’s son, Jakob Danger, has also performed together with him and his other son, Joey, in a couple of his songs and cover of a few other artists’ songs.

As mentioned earlier, Jakob did guitar and bass with his dad while his mom sang, and his brother did drums for their family’s band, The Boo’s self-titled EP. Moreover, he, along with his father and brother, performed a cover of one of the Tommy James and the Shondells’ singles in 2020.

The Armstrongs performed the cover of ‘I Think We’re Alone Now‘ on April 2020’s episode of Late Late Show With James Corden. They performed via Armstrong’s recording Studio, Adeline Records, to occupy their time during the COVID-19 shutdown.

We hope to see the Armstrong boys performing together on the same stage more often in the upcoming days.

Has Got Different Music Taste Than His Dad

Born into a musical family and immersed in art since birth, it would be easy for Jakob Danger to bask in the clout of his famous family. However, he actually aims to do the exact opposite. Jakob Danger is striking out to building his name in his own rights and hence, doing his best to create something different than his dad.

Aforementioned, Jakob and his Ultra Q Band released their single ‘Redwood‘ in 2019. It was also his first attempt to define the differences between the new and the old music. He told Hollywood Life that Redwood was sort of about nostalgia.

Danger added that it certainly relates to when he first came home after a while. He added it also relates to talking about all those old obsessions he used to have when he was a kid. Jakob further explained that his band’s first song was a good bridge between their old songs and the new ones they are currently working on.

Named His Current Band After Ultraman

The emerging singer-songwriter Jakob Danger once revealed the inspiration behind the name of his band, Ultra Q. According to Danger, when he was a kid, he loved watching the show called Ultraman, and he was super into it.

Later, Jakob discovered a sequel series of Ultraman, called Ultra Q, and his band member, Enzo, is also super into such kind of stuff. So, they started discussing out it together. And finally, they ended up using the name Ultra Q as a homage to something they loved when they were kids and still do.

The promising music artist Jakob Danger is active on Instagram, where he mostly shares photos and videos of his latest works. As of August 2021, his Instagram page has 66.6K followers, and each of his Insta posts gets over 7K likes within a few hours he uploads them.

Moreover, Jakob also has a YouTube Channel, which he created in 2013. At the moment, his YouTube channel, with only three videos uploaded to date, has 5.73K subscribers. On top of that, he is also an active Soundcloud and Twitch user.

Hence, the world-known rock singer Billie Joe Armstrong’s son, Jakob Danger, is currently pursuing his career in the music industry. While not busy with his music projects, he enjoys drawing and acting, which he has been doing since elementary school. Also, the multi-skilled California native is also passionate about acting.

On a side note, there is nothing on Jakob Danger’s girlfriend/partner. Nevertheless, whoever the person might be, will be a fortunate one.

So, it looks like another Armstrong with new ideas and skills is in the making. Let’s hope we will soon see Jakob achieving the height of success in all the fields he has an interest in.