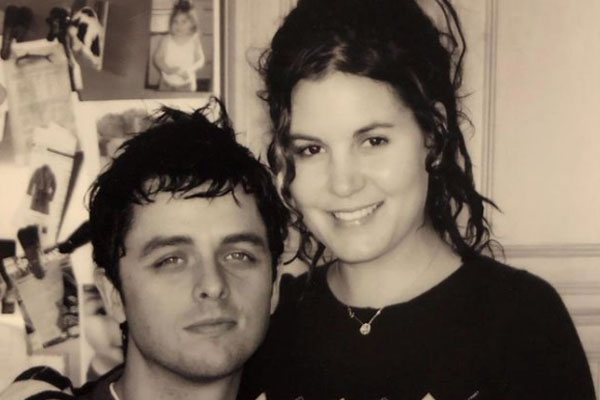 Adrienne Armstrong is the wife of the famous rock band Green Day‘s lead vocalist and guitarist, Billie Joe Armstrong. The co-founder of Green Day with its bassist Mike Dirnt, Billie married the professional skateboarder Steve Nesser‘s sister, Adrienne, in 1994. Since then, the pair are living together as husband and wife and are regarded as one of the long-lasting couples in the celebrity world.

Here, let’s take a look at some more facts on Billie Joe Armstrong’s wife, Adrienne Armstrong, whose parents are from Lebanon.

Adrienne Met Billie At A Concert In 1990

Billie Joe Armstrong and Adrienne Nesser met each other at a house party during Green Day’s first tour in 1990. One of Adrienne’s closest friends, Erica, introduced her to Billie and his bandmates that day. There, she asked for an address because Billie and his band had run out of their vinyl. Then the two began corresponding, became pen pals, and started talking through phones.

Ever since Billie befriended Adrienne, he started going to Adrienne’s city, Mankato, and playing shows, just to see her. Their first kiss led to an early Green Day song, ‘2000 Light Years Away.‘

After a couple of shows at Mankato, just to see Adrienne, Billie asked her to move out to California and give their relationship a try. Though Adrienne was scared to move to a new place, she accepted her then boyfriend’s proposal. It led Billie to compose the song ‘Westbound Sign‘ from Insomniac.

Billie asked his girlfriend to marry him soon after she moved to California, and obviously, she said yes. The couple married on 2 July 1994.

As mentioned above, Adrienne Armstrong became Billie Joe Armstrong’s spouse officially on 2 July 1994. Reportedly, their wedding ceremony took place in Billie’s backyard and lasted for five minutes only. Though it was short, their backyard ceremony represented many different religions.

It has been over twenty-six years since Billie and Adrienne tied their marital knot. Their relationship is the most stable among the Green Day members. Billie’s bandmate, Tre Cool, married three times. He married and divorced Lisea Lyons and Claudia Wright and is currently in a marital relationship with Sara Rose Lipert.

Furthermore, Mike Dirnt also married and divorced Sarah Garrity and Anastasia Serman and is currently tied in a marital knot with Brittney Cade.

However, Billie stuck to the only woman, Adrienne Armstrong, proving that long-lasting marriage exists in the celebrity world. Looking at their relationships, we can see that both of them have worked in kasyno bez depozytu together and have overcome every obstacle that came in their blissful married life.

The beautiful couple, Billie and Adrienne, is really an exemplary couple from whom many celebrities need to learn about keeping their relationship durable and intact.

A Mother To Two Kids

Billie Joe Armstrong’s wife, Adrienne Armstrong, discovered that she was pregnant with their first child a day after their marriage. Their son, Joseph Marciano Armstrong aka Joey Armstrong, arrived in this world, making them parents for the first time on 28 February 1995. Growing up, he also chose to be in the music industry like his dad. Currently, Adrienne and Billie Joe’s son, Joey, is a drummer for the band SWMRS.

Similarly, Adrienne gave birth to her other son with Billie Joe, Jakob Danger Armstrong, on 12 September 1998. He also grew up sharing a love for music with his dad and big brother. Currently, Jakob is also gaining fame as an American singer, musician, songwriter, and record producer. He is mainly famous as the songwriter, guitarist, and lead vocalist of the punk rock band Danger!.

A Graduate Of Minnesota State University

Billie Joe Armstrong’s wife, Adrienne Armstrong, was a transfer student to Minnesota State University. Adrienne was at the University of Minnesota for a few semesters, then completed her education at Minneapolis Community College.

While talking to The Free Press, Mrs. Armstrong said that she graduated in 1993. However, she had turned in a paper after one of her classes ended, and the professor never posted her grade. So, Adrienne had to call the school to argue the fact. They finally sent her degree in 1996.

Moreover, while sharing her college experience, Adrienne said that she loved school when she was in a more focused class of her degree. And, she definitely was a partier.

Most of us surely might have heard about the Adeline Records, founded by Adrienne’s husband, Billie Joe Armstrong, along with Doug Sangalang, Jason White, and Jim Thiebaud, in 1997. However, the record label abruptly closed in 2017. While it existed, Adrienne Armstrong also stayed in the position of its co-owner for some years. But she moved on and started her own business.

Reportedly, Adrienne Armstrong co-owned a clothing line and a merchandise portion of Adeline Records, Adeline Street. She co-founded it in February 2005. However, like Adeline Records, it also did not exist for long. Adrienne and her partners shut it down at the end of 2008.

She Did Several Odd Jobs While In Mankato

Before meeting her current husband Billie Joe Armstrong and moving to California with him, Adrienne Armstrong did various odd jobs at her birthplace, Mankato. As it was hard for her to find a job due to her dreadlocks and funky dress-ups, the first place that took a chance on her was The Jungle and the bowling alley.

According to Billie Joe Armstrong’s wife, Adrienne Armstrong, working at The Jungle and the bowling alley was like a trip for her. She really liked working there, and the bowlers warmed up to her. Besides, Adrienne served at Pagliai’s all through her college days. Also, she worked as a manager at Pier 1 after she graduated. Adrienne proudly opened up to The Free Press magazine reporter that she helped put the store together from the ground up.

But currently, Adrienne is busy with her own business line, Atomic Garden, which she began with her friend, Jamie Kidson, in November 2007.

Adrienne Armstrong, with her husband, Billie Joe Armstrong, actively participates and volunteers with different organizations for environmental conservation. In 2007, she and her family volunteered with the Habitat for Humanity development project. Moreover, Adrienne undertakes work with the Natural Resources Defense Council. She even composes videos to help raise awareness of the everyday things people can do to protect the natural environment.

Furthermore, Adrienne’s concern for the environment made her team up with Jamie Kidson to launch Atomic Garden in November 2007. It is an eco-friendly clothing and home goods store with a strong community orientation, located in Oakland, California.

Some of the items found in Adrienne’s store, along with their price, are as below.

So, while Billie Joe Armstrong is earning millions of dollars from his music career, his lady, Adrienne Armstrong, amasses several dollars from her clothing and home goods store.

We hope to see Mrs. Armstrong finding more success in her career in the days to come.