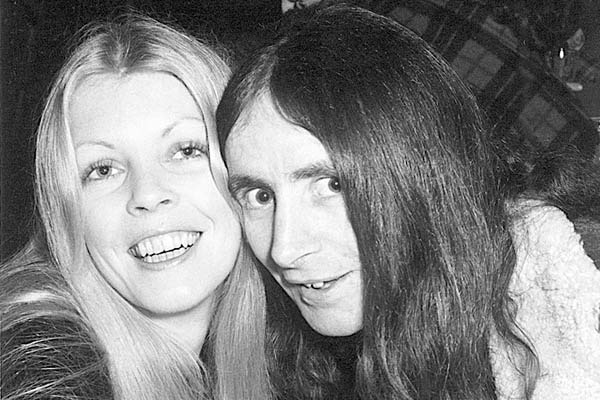 Bon Scott is a legendary Australian singer, songwriter, and instrumentalist. He was the frontman of the globally known and loved Australian hard rock band AC/DC, founded by the Young brothers, Angus Young and Malcolm Young. Before joining AC/DC, Bon Scott used to be the lead singer and drummer of other 70s rock bands like Fraternity, The Valentines, and his own band, The Spektors. However, Scott gained immense fame only after being the frontman of AC/DC in 1974, where he served till his death in February 1980.

Aside from his powerful voice, Bon Scott was recognized for his addiction to drugs, alcohol, and women. Though he was in an intimate relationship with numerous women, Scott married only once throughout his life. He was in a marital bond with an Adelaide beauty, Irene Thornton, for six years, from 1972 to 1978.

Here, be familiar with Bon Scott’s ex-wife, Irene Thornton, and her life after splitting up with Scott.

The late AC/DC frontman, Bon Scott, exchanged wedding vows with his longtime girlfriend, Irene Thornton, on 24 January 1972. At the time of their wedding, Scott was struggling in his music career as a singer. He had only performed with a couple of bands, including the Fraternity. It was a private marriage ceremony that took place in front of a few of Scott and Thornton’s family members and friends.

Bon Scott encountered his future wife, Irene Thornton, during a party in Adelaide. When Irene saw Bon for the first time, he had a woman tucked under one arm and a drink in his other hand. A few moments later, on the same day, while Irene was looking for the toilets, she saw Bon with a woman on a bed, naked, holding her foot.

However, it was Bon Scott and Irene Thornton’s mutual friend, Vince Lovegrove, who introduced them to each other. Eventually, Scott and Thornton got closer and started dating, followed by marriage in 1972. When they were dating, Irene was in the public service, working for the Civil Aviation Authority located in the Da Costa Building on Grenfell Street.

The marital bond between Bon Scott and Irene began to fall apart only a year after their wedding. The financial crisis they faced was one of the main reasons their bonding started to become weaker. Besides, Scott’s drug addiction and extra-marital relationships also played a great role in their separation.

As mentioned by Bon Scott’s ex-wife, Irene Thornton, in her book, once Bon took all the rent money without Irene’s permission. Consequently, Irene got furious and went to Largs Pier, where he was about to perform with his bandmates. She headed there and yelled at Scott for taking the rent money, which Scott denied at the time. They argued for a while, and Irene left the pub. She went home and packed all of Scott’s stuff with the help of her sister, Fay Thornton.

The next day, Scott came home and threw a wad of cash to Irene and said it was over between them. They divorced some years later after their break-up in 1977. However, Thornton remained a good friend to Scott till his last breath.

Remarried After Separating From Bon Scott

After officially separating from Bon Scott, Irene Thornton decided to move on with her life. She dated a man named Nick soon after getting a divorce from Scott. Thornton has a son with her partner, whom she welcomed some weeks after Bon Scott’s death. Currently, she lives with her son in Melbourne, Australia.

According to Bon Scott’s ex-wife, Irene Thornton, Scott had come to visit her six weeks before his sudden demise on New Year’s Day. As she was out with her partner, Bon had left a booze box at her front door. A day later, she introduced Scott to Nick. The same night, Scott went again to meet her, but Nick asked him to return, saying Irene was asleep at that time. Irene says it was the last time she heard and saw her ex-husband.

Irene could not attend her former husband’s funeral as she was due to give birth to her and Nick’s first child at that time. She got Nick to send a wreath. But, Irene still says in her interviews that she and Scott had a fantastic relationship. According to Irene, the time when they were first together was her best memories with Scott.

It has been over four decades since Bon Scott passed away and even more since Irene separated from him. However, it seems like she still loves him, and Scott is close to her heart. Probably, his songs are also making it hard for her to forget him easily. So, she often visits Scott’s hometown, Kirriemuir, to pay her respect to Scott during the annual BonFest music event.

In 2018, Sun magazine noted that Irene wanted to honor her former husband, Bon Scott, by making a pilgrimage to his statue in his hometown. Moreover, Irene wanted to visit Kirriemuir just to see where Bon Scott was from. After all, Scott was the only one who loved her unconditionally and purely. Though he dated numerous women, he still wrote her heartfelt letters, which Irene has written in her memoirs.

As for now, Bon Scott’s former partner, Irene, lives a quiet life far from the reach of media scrutiny with her son in Melbourne.