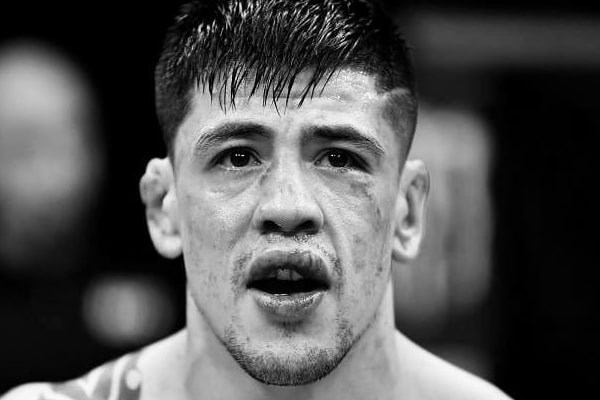 Brandon Carrillo Moreno, better known as Brandon “The Assassin Baby,” Moreno is a Mexican mixed martial artist. A professional since 2011, Moreno is the flyweight champion and the first-ever Mexican champion of The Ultimate Fighting Championship.

The 27-year-old is the best flyweight in the MMA world and was a former World Fighting Federation flyweight champion. The fighter who comes from a modest family with a piñata business has his own family now.

Married to his long-time partner, the couples share three kids, and all of them are daughters. Below let’s talk about the UFC champion’s beau & children and get to know them.

Brandon Moreno’s wife, Shirley J. Moreno, is a Mexican beauty and one of the prettiest wives in the UFC. The couple was long-time partners before sharing marital vows and are blessed with three beautiful daughters.

They have been together for almost 10 years now and celebrate their anniversary on the 20th of December. As for the Señora, very little is known as she keeps things to herself.

The mother of three has enchanting eyes and is just a few inches shorter than her significant other. When you take a glance at her, she looks like a model or maybe even an actress.

Regardless of everything, Brandon Moreno’s beau Shirley J. Moreno is a supportive wife who also attends most of his fight nights.

The Three Daughters In The Assasin Family

The Mexican fighter maybe the baby assassin in the octagon but is a weakling when it comes to his daughters. Brandon Moreno’s daughters, i.e., Maddie Moreno, Megan Moreno, and Morgan Moreno, live happily and healthy.

The first child Maddie was born in 2014, followed by Megan on 27th September 2018. Morgan is the youngest and was born in September of 2020. Since the recent one is not even a year old, there is very little information regarding her likes and dislikes.

As for the other two kids, they enjoy spending time with their father and are always seen around during his fight nights. Surprisingly all of Brandon Moreno’s daughters’ names start with the letter M.

Maddie Is Into Gymnastic

Brandon Moreno’s daughter Maddie Moreno is his first child and the eldest out of the three. The 19-5-1 fighter has always been grateful to God and his family for supporting him.

But none has been as much as his eldest daughter as a support system. Maddie was born during Moreno’s early UFC days and is a competitive gymnast. She took part in her first gymnastic competition back in 2019.

As being the eldest, Maddie is also good at handling and looking after her younger siblings. There are pictures of her on her father’s social media holding the recently born Morgan perfectly.

During Brandon Moreno’s daughter Megan Moreno’s birth, he had recently lost to Alexandre Pantoja and went to Legacy Fighting Alliance. In the LFA, Megan’s father would have a single bout with Maikel Perez before heading back to the UFC.

The Baby Assasin would never look since, as he now has his second daughter as the motivating factor. Megan Moreno is 3-years-old and looks similar to her elder sister. Sadly, Megan was born with health issues which later got finer after she was operated.

The Tijuana-based fighter’s fans were even confused as to whether Moreno’s daughters are twins or not. Unlike her sister, the 3-year-old shares similar eyes with her father and regularly appears on his social media.

The Mother of 3 Worried About Moreno’s Testicles

Despite keeping things to herself, Brandon Moreno’s wife Shirley J. Moreno showed her concern regarding his MMA career.

The black belt in BJJ’s recent first but with the former flyweight champion Deiveson Figueiredo saw him receive a gruesome nut shot. The shot may have been unintentional as it is common in MMA to receive such.

Though the bout ended in a draw, the mother of 3 made it clear to her husband about the issue. The UFC champ even sat with TMZ and talked about this matter in which he stated –

“This was the first time when the referee asked me if I wanted to rest a bit and I said ‘Yes, please!’. After the fight, my wife asked the same and warned me to be more careful.”

5’7″ fighter shared the excruciating pain he felt when he received the powerful blow from the flyweight champion.

Better Not Mess With Moreno’s Ladies

Brandon Moreno, aside from MMA, is a loving father and enjoys spending time with his family. He is one of the key factors to why UFC president Dana White didn’t demolish the flyweight division after Demetrious “Mighty Mouse” Johnson departed to One FC.

Shirley’s husband is the rightful challenger for the UFC gold, as his previous title bout ended in a draw. Sergio Pettis, Kai Kara-France, Jussier Formiga, Louis Smolka, Askar Askarov, and Brandon Royval are some of his notable opponents.

His rematch for the UFC flyweight championship in UFC 263, which was headlined by Israel Adesanya and Marvin Vettori saw him become Mexico’s first ever UFC champion.

Nonetheless, The Baby Assasin is a proud father and a loving husband who is always there for his loved ones. We wish the best to Brandon Moreno & his family for the future and well-being.