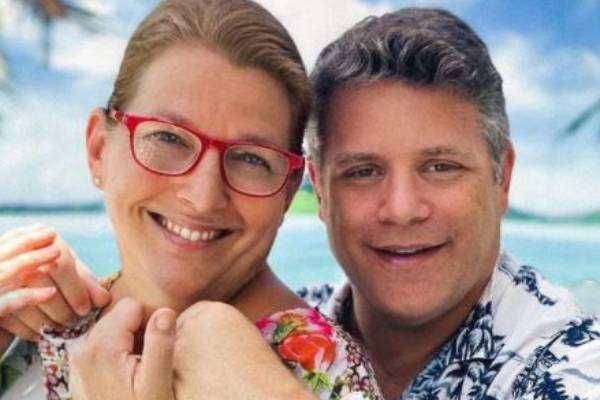 Christine Harrell's husband Sean Astin became popular for his role of Sam in The Lord of the Rings. Image Source: Ali Astin Instagram.

If you are a fan of The Lord of the Rings, then you must be familiar with the character Samwise Gamgee (later known as Samwise Gardner). Sam is a hobbit and the chief who serves as the sidekick of Frodo Baggins, portrayed by Elijah Wood. The popular American actor Sean Patrick Astin, aka Sean Astin, portrayed the character. Apart from the film trilogy, he has appeared in several other movies and television series, which have helped him gain immense fame.

As a result of Sean’s fame, the fans and followers are curious to learn about the actor’s personal life. A doting father of three beautiful daughters, Sean has been married for a long time now. So, in this article, let’s learn more about Sean Astin’s wife, Christine Harrell, and their marital life.

Over Two Decades Of Marital Life

As mentioned earlier, The Lord of the Rings star Sean Astin shares a blissful marital life with Christine Harrell. They met in 1990, while Christine was working at an agency in Beverley Hills. The couple began dating and after being together for one year, they decided to take the next step in their relationship.

On July 11, 1992, the lovebirds walked down the aisle. The families and close friends from both sides attended the wedding ceremony to bless the newlyweds.

It has already been over two decades of Christine and Sean’s blissful marital life. Their love for each other and their marriage is still the same and is going strong. Moreover, the lovely couple welcomed three kids.

As mentioned earlier, Sean Astin and Christine Harrell have been married for 29 years, and in all these years of togetherness, they gave birth to three daughters. On November 27, 1996, Sean Astin’s wife, Christine Astin, gave birth to their first daughter, Alexandra Louise Astin, also known as Ali Astin.

Then, on August 6, 2002, the couple welcomed their second daughter, Elizabeth Louise Astin. Three years later, on July 22, 2005, their third daughter, Isabella Louise Astin, arrived. Christine Harrell’s daughters with Sean Astin have all grown up and are doing great in their lives.

Moreover, Christine’s eldest daughter, Alexandra, also played a cameo role in The Lord of the Rings: The Return of the King, as Eleanor Gamgee, Sam’s daughter. She has also acted in several other projects and seemed to have pursued acting as her career.

Like him, Sean Astin’s spouse, Christine Harrell, is also involved in the entertainment industry. The daughter of Nancy Miller and Frank Harrell, Christine Louise Harrell, grew up modeling. When she was 17, she won the crown of the Miss Indiana Teen USA 1984. After that, she moved to Los Angeles from Indiana and continued modeling.

Later, Sean’s life partner, Christine, started her career in the entertainment industry by working as an Executive Assistant at Special Artists Agency. She worked as an assistant to Elizabeth Dalling, CEO, head of International and celebrity representation, and senior partner.

Moreover, Christine produced the 1994 short film Kangaroo Court, which her husband, Sean, directed. In September 2018, Christine’s husband announced that they had spent the last ten years working on a full-length movie based on Lois Lowry‘s Newbery Medal-winning novel Number the Stars. But the movie is not released yet.

Christine has also been involved in community services. According to IMDb, she has worked with Greater Los Angeles Girl Scouts and the local government. In addition, she has lent her artistic talents to city beautification.

Furthermore, Christine currently serves as CFO and Vice President of Lava Entertainment. It is a performing arts company which is based out of Los Angeles. She has been working in the company since 1992, where her husband is CEO and President. Thus, Christine must be earning significantly in her career, resulting in her net worth being a considerable sum.

Talking about Christine Harrell’s husband Sean Astin’s net worth, it is estimated to be $10 million. Sean and Christine must be living a comfortable life with their kids.