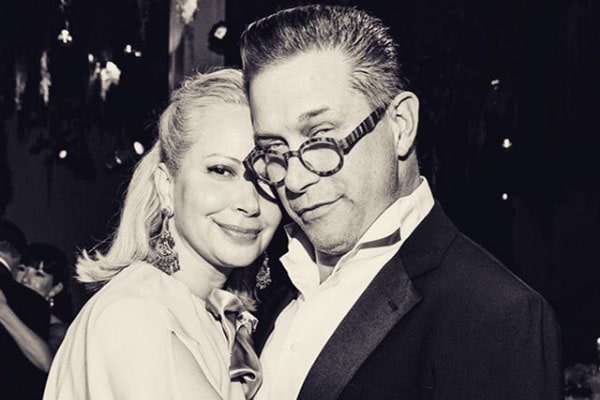 Gorgeous Kennya Baldwin is the wife of American actor Stephen Baldwin. Well, the lovely couple married each other in 1990. And with that, they became parents to their stunning daughters, Alaia Baldwin and Hailey Bieber.

Despite being part of one of Hollywood’s most famous families, very few people know about Kennya due to her private lifestyle. Nevertheless, Stephen often praises his wife in interviews and on the red carpet too.

Now, getting back to the topic, we got some interesting facts about Kennya Baldwin that you will get to know if you stick with this article until the end. So, let’s get straight down and learn more about Stephen Baldwin’s wife, Kennya Baldwin.

Kennya Baldwin Is A Graphic Designer

Well, Kennya Baldwin has a well-groomed career as a graphic designer. Born in Brazil, Kennya moved to the States as a child. She studied at the York Preparatory School, where she graduated in 1984. Later on, she attended Parsons School of Design and completed her graduation in graphics designing.

Her Father Is A Grammy-Winning Composer And Songwriter

Kennya Baldwin’s father, Eumir Deodato, is a legendary Brazilian composer and songwriter known for his eclectic mix of genres, such as pop, rock, disco, and Latin music. He achieved success as a solo artist in the 1970s and 1980s. Deodato has been nominated for the Grammy Awards as well.

The surprising fact about Kennya Baldwin’s father is that he still continues to release new music, with his latest album being 2010’s The Crossing. So, Kennya Baldwin is the daughter of a renowned Grammy-winning composer and songwriter.

Stephen Baldwin and his wife, Kennya Baldwin, met on a subway in 1987, and shortly after that, they began dating each other. After three years of romance, the lovely couple tied the marriage knot on June 10, 1990. Kennya’s husband, Stephen, was an actor on the popular T.V. series, The Young Riders. And he was battling drug and alcohol addiction during that time.

But by the time they had married each other, Stephen Baldwin was clean from his addiction. The couple has been together for more than three decades. By the time Stephen Baldwin and Kennya Baldwin became parents to their gorgeous daughters, Alaia and Hailey, the married couple were over the moon.

Although the two have had their share of rocky times, Stephen and Kennya have remained strong together. However, once rumors of Stephen Baldwin having an affair with a masseuse came out in 2018.

But when asked about it, Kennya Baldwin’s husband denied cheating. Well, even after such news, the couple did not give up on their relationship and are still together. It shows how strong the love between Kennya and her husband, Stephen, is, as it was at the start.

Both Of Kennya Baldwin’s Daughters Are Supermodels

Stephen Baldwin’s wife, Kennya Baldwin, is the mother of her two supermodel daughters, Alaia Baldwin and Hailey Bieber. Both of them made a great platform in the fashion and glamour industry and have won the hearts of millions as well. Her eldest daughter, Alaia Baldwin, is a fashion enthusiast and has been represented by D’Management in Milan and The Square in London.

Alaia is married to her husband, Andrew Aronow, and they shared their vows on Sep 2, 2017. He’s a producer and has produced several web series, commercial projects, etc. Similarly, Kennya Baldwin is Justin Bieber‘s mother-in-law in relation. The famous couple, Hailey and Justin, got engaged in July 2018 and, after two months in Nov 2018, surprised the world with their marriage.

As for Hailey Bieber’s modeling career, she is represented by IMG Models. She has also appeared in runway shows for Ralph Lauren, Philipp Plein, and Tommy Hilfiger. Kennya Baldwin is so proud to see her daughters making a prolific career in the entertainment industry.

As stated at the top, Kennya Baldwin tends to live a private life even if she is one of the Baldwin family members. She has no Twitter, Instagram, or whatsoever social media handle. Plus, very little is known about Stephen Baldwin’s wife due to her subtle and quiet lifestyle, which perhaps makes her more obscure. FYI, she was featured in Livin It: Unusual Suspects, which is a 2005 T.V. movie documentary.

But it does not stop Kennya’s husband and two beautiful daughters from posting her photos and videos on their respective social platforms. Hailey had posted a throwback photo of her and her mom. She wished her mom on her birthday with a heartfelt message. Likewise, Alaia also posts photos of her mother frequently.