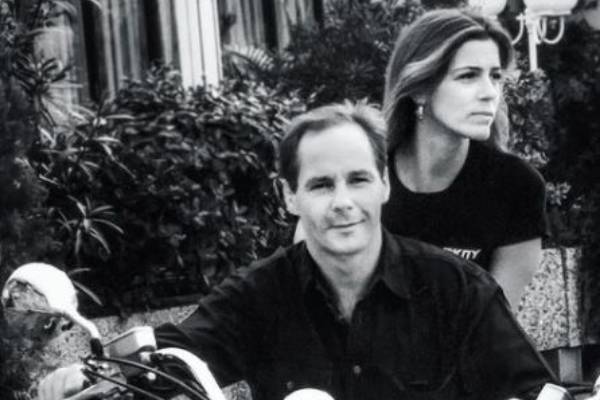 Gerhard Berger and Ana Corvo are reported to have exchanged their wedding vows in 1995. Image Source: Rui Moreno Instagram.

Formula One is one of the most followed sports globally. The Formula One Championship operates globally and has its traditional base in Europe. Furthermore, many racers and business people have earned significant fame and fortune because of this sport.

Among several legendary racers, one name that can never be forgotten from F1 racing is Gerhard Berger. He is a former F1 racer from Austria who competed in F1 for 14 seasons. Berger is regarded as one of the greatest racers in F1 history.

Unlike his professional success, Gerhard’s marital life does not seem to be that successful. So, what caused the marriage between Gerhard and his long-time wife, Ana Corvo, to end?

In this article, let’s find out about Gerhard Berger’s ex-wife, Ana, and the reason behind their divorce.

First Met At A Party

The famous F1 racer Gerhard Berger was once married to the former model, Ana Corvo. Their first meeting was in September 1987, in Estoril, at the Frolic discotheque. It was a party that was sponsored by Real Companhia Velha and was held exclusively by Ferrari on the eve of the Portuguese F1 Grand Prix being disputed.

As per an online site, after the party, Gerhard invited Ana to join him and his team in Barcelona, to which she said yes. However, it has not been revealed when they began their relationship. The adorable duo has not talked much about their lives, but it is reported that they exchanged the vows in 1995.

Other than that, the couple has not revealed much about their marriage.

In an article published in 2008, Gerhard Berger’s ex-wife, Ana, talked about how her family was like so many others, with a very normal life. At that time, they lived in Monte Carlo. She also added that she followed her husband less so that she could dedicate all her attention to their daughters.

Their Marriage Came To An End

It is not easy for a marriage to work in real life, as it takes a lot of hard work and effort. The relationship that started from the first meet at a party, to tying the knot several years later in 1995, to welcoming two kids together, Gerhard and Ana went through several phases in their relationship.

Sadly, their marriage could not remain the same forever, and the duo parted their ways. It is reported that the ex-pair got divorced in 2013. According to the divorce documents, Gerhard Berger’s ex-partner demanded $28,500 in maintenance per month. Similarly, she also made a demand of $11,500 for kids, rent, school, doctor, and many other expenses.

According to the article, Ana filed two lawsuits, one in Monaco and one in Kufstein. The article mentioned that the separated couple had a dispute over their home in the picturesque village of Söll, not far from Kufstein. The house officially belongs to the “Christina Privatstiftung” and as a result, Gerhard’s daughter, Christina Troppmair, from his ex-girlfriend, Rosi Troppmair, became the topic of dispute.

Berger talked nicely about her and mentioned that he liked Ana a lot but just didn’t want to be her partner. Let’s hope the couple had settled everything and is living a peaceful life.

Following the divorce, the ex-duo must have moved on in their respective lives. Ana Corvo’s ex-husband Gerhard is currently dating a woman named Helene. Moreover, Gerhard has welcomed two kids from his relationship with his current girlfriend. Just like his relationship with Ana, he has kept his love life with Helene private, away from the media.

But, it has not been revealed if Gerhard Berger’s ex-wife remarried or had any kids of her own. Even after the divorce, the ex-husband and wife continued to look after their daughters with mutual understanding.

Her Younger Daughter Followed In Her Footsteps

Gerhard Berger’s ex-spouse, Ana Corvo, is a former Portuguese model. She spent several years dazzling on the catwalks. However, after the birth of her daughters, she must have taken a break from the modeling industry in order to look after them.

But, Ana still gets to experience the modeling industry and fashion events, all thanks to her youngest daughter, Heidi, who went on to follow in her footsteps. Gerhard’s ex-wife watches the emergence of new talents in the national market. Plus, she often accompanies her daughter to several events.

In November 2016, Ana and her two daughters attended L’Agence Go Top Model in Lisbon. She shared her contest experience and talked about the differences she found between her time and today’s time. She exclaimed that it was adorable, and as she had been away for a while, it almost felt like starting over.

Ana mentioned that, during her time, there were no agencies, the organization was all different, they were almost a family, and everything was much smaller. Well, she must be proud of her little girl who is walking in her footsteps. She often says that she is supportive of whatever her girls want to do.

Although Ana has gained fame, she tries to remain away from the limelight. Plus, she has also made her Instagram private. So, it has become challenging to know what she’s been up to these days.

Nevertheless, we hope Gerhard’s ex-wife is doing great for herself and wish to know more about her in the coming days.