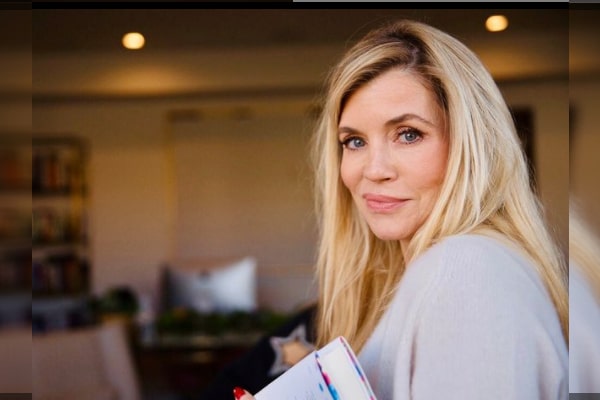 Jordan married three times, Denise Lombardo being his first, and Nadine Caridi his second. He was also married to Anne Koppe and parted ways shortly after. As of now, he is in a relationship with a wonderful lady named Cristina Invernizzi. Well, we do know more about Jordan Belfort than his wife. So let’s shed some light on Jordan Belfort’s ex-wife Nadine Caridi from this point on. Let’s go.

Jordan had his run-ins with the law before pursuing his career as a motivational speaker. On the other hand, Nadine had been hustling to make a bright future as a licensed therapist.

Ironically, Jordan Belfort’s ex-wife, Nadine Caridi is a licensed marriage and family therapist since 2011. She is associated with the LMFT since April 2013. According to Caridi’s LinkedIn, she helps her clients overcome identity distortions and help couples re-connect emotionally. Furthermore, Belfort’s former spouse focuses on helping individuals and couples achieve strong relationships and overall satisfaction.

Previously, Nadine worked at Manhattan Beach Community Counseling for two years between 2011 and 2013. She provided psychotherapy to adults struggling with issues such as anxiety, depression, transitions, etc.

Jordan Belfort’s ex-wife, Nadine Caridi, received her Ph.D. in Study Somatic and Depth Psychology from Pacifica Graduate Insitute in 2015. She further achieved her Masters in Counseling Psychology in 2010.

Dr. Nadine Caridi acquired her post-doctoral training in the NeuroAffective Relational Model in 2014. Because of her dedication to her work, she has gained fame and a reputation that none can question but praise. Furthermore, besides her LinkedIn, Nadine Caridi’s Instagram is jam-packed with her life suggestions and glimpses.

Besides Jordan Belfort’s ex-wife, Nadine’s current professional choices, the beautiful lady was an English model. The beautiful hazel eyes complimented by her beautiful golden hair and beautiful mind, she captured attention from firms like Miller Coors. She made a contract with Coors to advertise the ‘Miller Lite.’

Nadine appeared on several other television commercials besides the Miller and advocated for health campaigns through the newfound fame.

Besides having a reputation as a beautiful former model and a great therapist, Jordan Belfort’s ex-wife, Nadine Caridi, initiated a YouTube channel named Dr. Nae. She shares stories of her clients and shares her knowledge on topics like hopefulness, anxiety, etc.

Well, Nadine is doing great for herself professionally but was it always like this. If it was, why did her marriage ended with Jordan? Hence, ready to scrutinize Jordan Belfort’s marriage with Nadine Caridi?

Although Belfort-Caridi’s marriage lasted over a decade, the pair were never a perfect couple. A wedding filled with scandals, intoxicating substance abuse, and an army of expensive hookers. His schedules included limitless cocaine, s*x, hookers, and violence and infidelity.

As mentioned earlier, Jordan wasn’t loyal, and infidelity could be his second name. He wasn’t even empathetic as he flew 100 hookers to Las Vegas for an o*gy before the $801,436.80 (£600,000) Caribbean wedding with Nadine.

Jordan further swanked about mating with former Mrs. Belfort on a $3 million mattress made of $100 bills. WOW! Besides bragging about adultery, schedules packed with drugs, and infidelity, Nadine was kicked down the stairs of her ex-husband’s 24-bedroom Long Island mansion.

Besides their troubling marriage, the couple welcomed beautiful babies before Belfort’s former partner FINALLY grew sick of his recklessness and filed for divorce. She held a son, Carter J. Belfort, and a daughter, Chandler Ann Belfort, throughout the stormy marriage. Furthermore, the divorce settlement might have aided a great deal in Caridi’s wealth as well.

The couple parted ways in 2005, and now she is vibrant as ever. But why do you think Nadine tolerated 10+ years of mistreatment, domestic violence, and emotional distress?

READ MORE: Jordan Belfort’s Girlfriend, Cristina Invernizzi, How Did It Begin For The Pair?

Aforementioned, Jordan Belfort’s ex-spouse, Nadine Caridi, was mistreated and miserable during their marriage. However, both former partners moved on with Nadine marrying the businessman John Macaluso while Jordan is now in a relationship with Cristina Invernizz.

The marriage and family therapist married yet another prominent name in the business industry, John, who previously served as the CEO of Wizard World. The Macaluso family grew more apparent as Nadine Caridi’s husband; John has three kids, Frankie Macaluso, Nicky Macaluso, and Allie Macaluso from his previous marriage.

Similarly, Nadine posts several pictures of them together with suggestive captions. Nadine shares beautiful bonds with her babies and posts on their birthdays. She also has a beautiful relationship with her step-kids and cares for them as her own.

Well, Nadine Caridi, aka Nadine Macaluso, is very happy and satisfied professionally, as a wife and a mother. Let’s hope she continues to live in prosperity and continues to share wisdom with those needed.