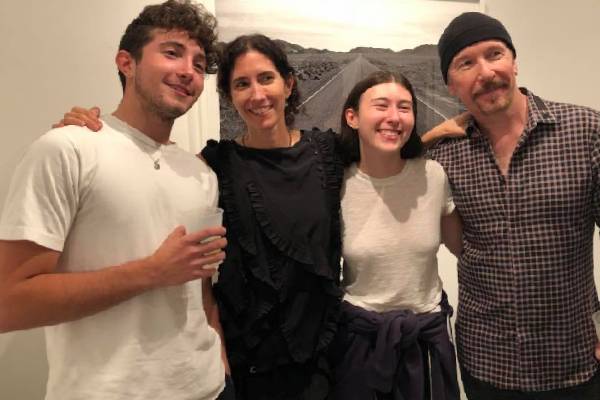 The popular dancer Morleigh Steinberg is a married woman. She lives a blissful life with her husband, David Howell Evans, who is professionally known as The Edge, and two children. Morleigh’s partner is well known as the lead guitarist, keyboardist, and backing vocalist of the rock band U2 since 1978. Now let’s learn more about The Edge’s wife Morleigh Steinberg including her love life and children.

The famous dancer Steinberg was born and raised in Los Angeles in a Jewish family. From her early age, she started learning modern dance. She went to Beverly Hills High School to learn modern dance performances and later got involved at The Interlochen Arts Academy.

The beautiful choreographer, Morleigh, took a one-year training in dance in Paris. Later, she began dancing in the studio of Moses Pendleton in 1983. After, she gathered up with other dancers and created a dancer-illusionist company, MOMIX, which got split later due to financial insecurities.

Later, Morleigh founded a dance company, ISO, which made the turning point of her career. The dance company made her part of the dancing crew of U2 in the song titled With Or Without You. She was then called to work as a choreographer and later as a belly dancer during their Zoo TV Tour.

Apart from this, The Edge’s Wife Steinberg also did choreographic work for three feature films, Bram Stoker’s Dracula, Earth Girls Are Easy, and Wild Orchid. She is also noted for her work as a director for several films listed below.

Morleigh is pursuing a successful career because of her devotion to her work which makes her popular worldwide.

Married to The Edge Since 2002

Morleigh Steinberg met her love, The Edge, during The Zoo TV Tour in 1993. The U2 band employed her as a choreographer and on-stage belly dancer during the tour. By the end of the tour, the couples turned their friendship into a relationship.

The beautiful couple dated for more than nine years and finally exchanged their wedding vows on June 18, 2002. The pair had a small civil service at a registry in Dublin as a formality. Four days later, they got hitched in a French wedding with 200 guests at the hilltop village in France. According to IMDb, Morleigh looked beautiful in the lace gown made by Rozae Nichols. The ceremony was handled by Steinberg’s father, Robert.

When love blossomed between the lover, Steinberg moved to Ireland, where she, as a choreographer and designer, helped raise modern dance’s popularity. She was very happy in her relationship with U2’s lead guitarist and being associated with a famous musician did not faze Steinberg. The Edge also improved his frame of mind after a long period of unhappiness.

The power couple has set an example of marriage and relationships. The Edge and his wife are undoubtedly living a charmed life. Their happiness rose more after they became parents to two lovely kids.

Morleigh Steinberg Is A Mother Of Two Kids

Morleigh and The Edge, being married for more than 19 years, are parents of two wonderful children – a son and a daughter. Among them, Sian Beatrice Evans is their first child, who they welcomed in 1997 in Los Angeles. Similarly, after two years on October 25, 1999, they became parents to one more child, Levi Evans, in the same city.

In 2010, Steinberg revealed in an interview that her daughter Sian Evans had suffered from leukemia at seven and went through three years of treatment. Later it came to light that she also has Dyslexia which causes common learning difficulty. The Edge’s wife also talked about the combination of love, concern, and pride that parents feel about their children.

Well, Morleigh Steinberg’s children do not want to be in the spotlight and have no interest at all. They want to keep their personal life in a wrap. However going through Morleigh Steinberg’s Facebook, we can see that she frequently posts photos of her family. The lovely family is fond of spending time with one another.

Before Morleigh Steinberg met The Edge, he was married to Aislinn O’Sullivan. He had three daughters with his ex-wife- Hollie Evans in 1984, Arran Evans in 1985, and Blue Angel Evans in 1989.

The happy family pursues a comfortable lifestyle and believes in spending quality time together. Even after decades-long conjugal, the pair is still thriving in love. However, Morleigh and Edge proved that a good relationship is only possible if there is an understanding between them.