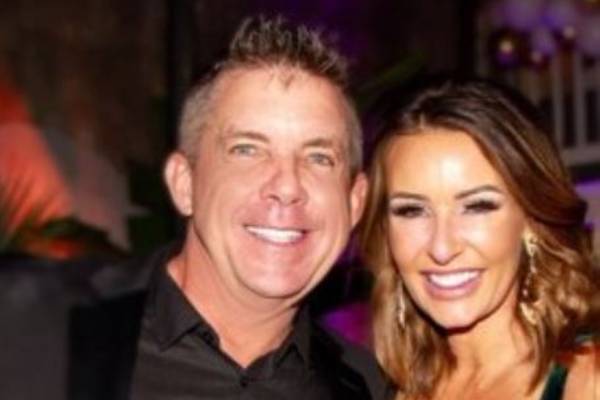 Sean Payton and Skylene Montgomery have been married since 2021. Image Source: Sean's Twitter.

Patrick Sean Payton, aka Sean Payton, is a former American footballer and head coach in the National Football League (NFL). Before coaching, he played as a quarterback during his playing career. Sean was an undrafted player in the 1987 NFL draft but played in the NFL with Chicago Bears during the NFL Players Strike in 1987.

Sean Payton hung up his boots pretty early to pursue his career in coaching. He started his coaching journey as an offensive assistant at San Diego State University before landing a role with Philadelphia Eagles in 1997 as the quarterback’s coach.

Since then, Payton has gone on to work with New York Giants and Dallas Cowboys. However, his first head coach role was with the New Orleans Saints in 2006. Sean led the Saints to a Super Bowl victory against the Indianapolis Colts in 2009. He worked with the Saints for over a decade before stepping down in 2021.

Apart from football, Sean has been married twice. He was married to his first wife, Beth Shuey, from 1992 to 2014. He had two children from his previous marriage. Currently, Sean is married to Skylene Montgomery.

Hence, in this article, let’s talk about Sean Payton’s wife, Skylene, and their marriage.

Sean Payton’s spouse, Skylene Montgomery, was born in 1984 in West Virginia to Skylar Montgomery and Darlene Montgomery. She went to West Virginia High School and played baseball during her school days. However, Skylene developed an interest in beauty pageants and participated in a lot of such events.

Skylene first participated in Miss Teen West Virginia when she was in the ninth grade at 14 years old. Unfortunately, she just came short and ended up with the 1st Runner up spot. Nevertheless, she went on to compete in several beauty pageants.

Furthermore, Skylene won the Miss West Virginia title in 2008. She participated in Miss USA too but couldn’t make it. Moreover, Sean Payton’s wife is a fitness extraordinaire and loves to do yoga. Skylene also has a degree in Physiology and Excercise. She has appeared in fitness tutorials and advertisements for popular magazines.

Besides competing in beauty pageants, Skylene was also serious about her studies. She attended West Virginia University and holds a nursing degree from there.

Sean Payton Made A Suprise Proposal to Skylene

Skylene and Sean met at the pregame ceremony of the NFL game between the Saints and Panthers. Skylene asked her friend for tickets to the game. Instead, she was handed Sean’s phone number. The pair fell in love and immediately started seeing each other.

In November 2019, Sean surprised Skylene with an engagement ring in front of everyone at the French Quarter restaurant Longway Tavern. Saints owner, Gayle Benson had invited the couple to the restaurant stating that it was a celebration of her 15th wedding anniversary with her late husband, Tom Benson. However, this party was for a surprise proposal.

Following Sean’s proposal, Skylene was delighted and said yes. The couple then partied the night with their close friends and family.

After a couple of years of engagement with her husband, Sean, Skylene, and Sean tied the knot in 2021 in Cabo San Lucas, Mexico. Sean was seen in a white suit with Nike sneakers, and Skylene wore a long lacy white dress. The love bird seems to be very happy with their marriage. Skylene would often come to the stadiums to support her husband during his games.

In their marital span of over a year, the couple does not have any children together. However, Sean has a daughter, Megan Payton, born in 1997, and a son, Connor Payton from his first marriage. Connor who was born in 2000 is also trying to pursue a career in football. Furthermore, he could also be seen attending his father’s game for 15 years with the Chiefs before Sean stepped down in 2021.