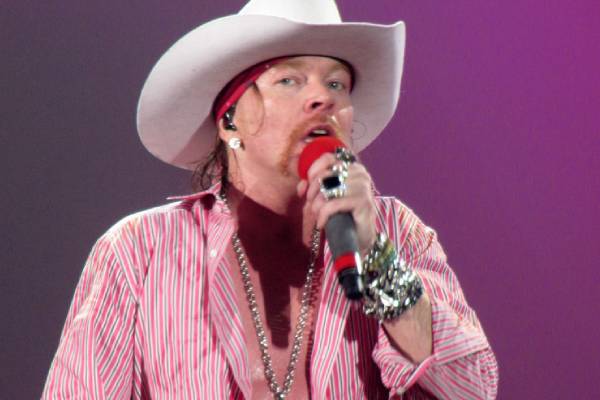 In his musical career, Axl Rose has amassed net worth of $200million. Image Source: Wikimedia Commons.

Axl Rose, also known as W. Axl Rose, is a popular musician, record producer, singer, and songwriter from America. He came into prominence as the lyricist and lead vocalist of the American hard rock band Guns N’ Roses. In his more than two decades of a musical career, Axl Rose has amassed tremendous wealth and fame.

According to Celebrity Net Worth, Axl Rose’s net worth is estimated to be $200 million. Now, let’s learn more about his earning details and how he managed to earn such vast wealth.

Axl Rose Net Worth And Earnings

As stated earlier, Axl Rose’s fortune is estimated to be $200 million. Similarly, according to The Richest, his fortune is $150 million. Although the amount varies, there is no doubt that he has earned significantly in his career.

The wealth amassed by him comprises his income from the record sales of different music albums that he has released with different bands and other ventures.

Axl Rose began his musical journey in 1983 when he joined the band Rapidfire and recorded a five-song demo with the guitarist of the band, Kevin Lawrence, whom he met outside The Troubadour in West Hollywood. They released the demo as an EP, Ready to Rumble, in 2014. He parted way with Lawrence and formed the band Hollywood Rose with Izzy Stradlin and Chris Weber.

They recorded a five-song demo in January 1984, which featured different tracks like “Rocker,” “Anything Goes,” “Reckless Life,” and “Shadow of Your Love.” The tracks were released as The Roots of Guns N’ Roses in 2004.

The band gained huge success and fame abruptly; as a result, they were able to earn a huge sum of money. Their debut album, Appetite for Destruction, was critically acclaimed. However, in its first year of release, it made 500,000 copies. But due to the success of their single, Sweet Child o’ Mine, the album gained traction and rose to No.1 position. To date, it has sold over 30 million copies.

Some of the albums and their record sales are mentioned below, as per The Richest.

Then, the band released several other albums and singles, which were also sold in millions of copies. Similarly, Axl Rose and other bandmates also earned from the ticket sales of their concert, which they held at different places. As of 2019, the band Guns N’ Roses’s net worth was $44 million.

In April 2016, AC/DC announced that they were adding Axl Rose as the lead vocalist for the remainder of their 2016 tour, Rock or Bust World Tour dates. He replaced Brian Johnson, who had to stop touring due to hearing problems.

The ticket sales of the tour, as per The Richest, were $221,100,000, and approximately 862,915 tickets were sold. Thus Rose might have earned significantly from the tour.

The reports indicated that Axl and Angus Young would be continuing the band. However, in September 2020, the band announced that Phil Rudd, Cliff Williams, and Brian had returned to the band in 2018, and they had recorded an album. Thus, Axl performed with the band for the 2016 tour only.

Axl Rose has earned not only massive wealth but also huge fame and recognition. Because of this, he must have been offered several endorsement and sponsorship offers from several brands, which must have benefitted the growth of Rose’s fortune.

In an interview with Jimmy Kimmel, Rose mentioned that he supported Barack Obama during the 2012 Presidential Election. Similarly, in the 2018 Presidential Campaign, he showed his support for democrats. Thus, he must have donated to both of the election campaigns.

Thus, with almost four decades of a musical journey and more than dozens of singles and music albums from popular bands like Guns N’ Roses, Axl Rose’s net worth of $200 million seems reasonable. In addition, he is still very dedicated to his career, so one cannot doubt that his net worth will increase in the coming days.

As mentioned before, Axl Rose’s fortune is estimated to be $200 million. All thanks to his multi-million dollars of fortune, Rose is able to afford a privileged and luxurious lifestyle. Similarly, he must have paid a significant amount in taxes too.

He lives a comfortable life in Malibu, California, which he bought in 1992 for $3.6 million. In November 1990, Rose and his former wife, Erin Everly, purchased a 2,000-square-foot house for $800,000. The house has two bedrooms and is spread in a private 11/3-acre knoll in Beachwood Canyon.

Similarly, Rose also bought a home from Victor Kaminoff for $330,000 in 1989. However, shortly after buying the house, he broke all the windows and shoved a $38,000 piano through the side of the house. Similarly, he destroyed the fireplace, which was estimated to have cost $30,000 at the time it was built.

Nonetheless, Axl Rose must be living a great life.