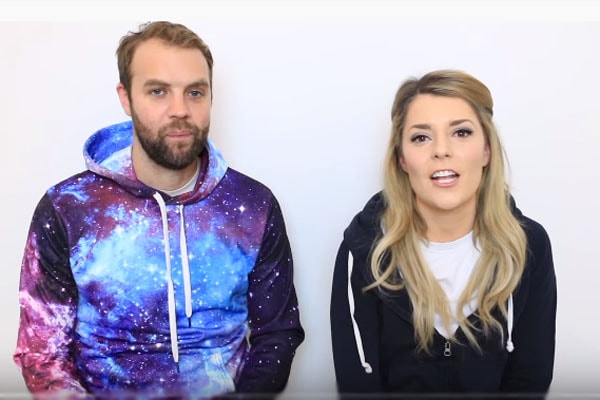 Grace Helbig and her ex Brooks Patrick Wheelan used to be in a relationship with each other. Their fans claimed the former pair as a power couple and great comedians.

Grace Helbig’s ex-boyfriend, Brooks Wheelan, is an American stand-up comedian, actor, and writer. Brooks also was a cast member on Saturday Night Live for the 2013-2014 season.

Also, Grace Helbig is an American comedian and actress. Not only that, but she is also a full-time YouTuber who has gained over 2.74 million subscribers on her YouTube channel, which goes by her name. So, coming back to the topic, let us glance at the relationship between the former couple.

Grace Helbig and Brooks Wheelan had a lot of similarities. As both are comedians, they were most famous for their humorous comic timing, and the fans appreciated them as powerful comedians. There is no exact date or how long the ex-pair dated, but it seems as if they started dating in late 2016 after Grace’s breakup with her ex-lover, Chester See.

Even the former comic pair splitting news was quite a mystery as nobody knew when exactly the now exes got separated. Perhaps, the ex-couple had some issues when they were together. That might have led to their breakup.

Both Grace Helbig and Brooks Wheelan probably had a hard time after their breakup to move on with their life. But they passed those difficult times and are now happily enjoying their life at the moment. So, let’s get down to know more about what’s happening in their love life and relationship status.

Among all of the relationship of fan-favorite YouTuber, Grace Helbig, one thing is always common in all, and that is her comedian choice of boyfriends. Looks like being a comedian herself, Grace wants her partner to be as humorous as she is. Well, as of 2020, Grace is dating a stand-up comedian, Elliott Morgan, who appears on NBC’s comic show Bring The Funny.

As mentioned earlier, Grace started dating her ex-boyfriend, Chester See, back in 2014. Chester is also a YouTuber and the host of Disney 365. However, both settled their differences and parted their ways in mid-2016. It is quite obvious that Grace and Chester remain, good friends, as Grace released a video titled “Can Exes Be Friends” on her YouTube channel.

Not only that but, glancing at the comedian, Brooks Wheelan’s Instagram account, it seems as if he is dating a girl named Gabrielle Sheridan who also is his roommate. The two ex-couple have moved on with their lives, and it looks as if happy with their current love-life.

The two often seem to enjoy their vacations together and love traveling to exotic locations. Well, we can see that both Grace Helbig And Brooks Wheelan have already moved on and are currently enjoying their new lovelife.