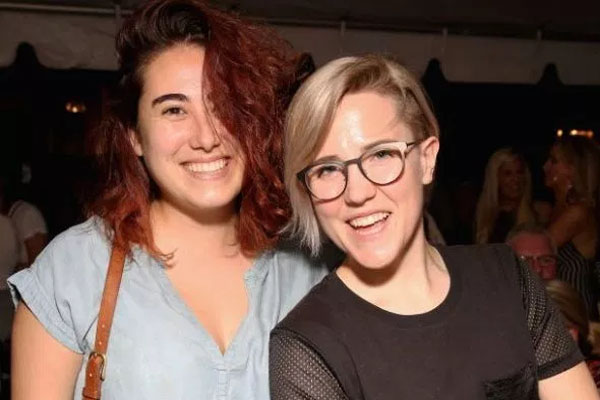 The lovely YouTuber couple of Hannah Hart and Ella Mielniczenko have been engaged since 2018. Hannah Hart’s fiance Ella is BuzzFeed’s Executive producer. The pair, who have been dating since 2016, got engaged during a trip to Hawaii with a simple pear-shaped diamond ring. Hannah was the one who popped the question to her girlfriend Ella. In an interview, the lovely couple said that they are happiest when they are together.

Later on, Hannah told the whole story to People and shared the news with her fans via her YouTube channel.

The two couples Hannah and her fiance Ella loves spending time together and traveling together. Hannah and Ella also made it clear that they have a fun-loving relationship like everyone else. Fans gave them the hybrid couple name “Hella”.  Looking at their relationship, it is just adorable to watch them as lovers.

As it is now, not all accept homosexual marriage. he couple stated that there is just not enough positive queer representation out there of the realities of being in queer relationships. They further stated that homosexual love is the same as heterosexual love as both the couple cry when they get engaged and also fall in love.

Nevertheless, the pair seems to be enjoying so much quality time together. Plus, Hannah also uploaded a video on her channel describing how she proposed her soon to be wife Ella. Later on, Ella Mielniczenko’s fiance Hannah uploaded a video about their engagement story.

Previous Relationships Of Hannah and Ella

Looking into their past lovelife, the foodie Hannah once dated YouTuber, Ingrid Nilsen. Hannah and Ingrid started dating from September 2015 and got separated in January 2016. After the breakup, Hannah said that there were no hard feelings between her and her ex-girlfriend Ingrid.

As for Hannah Hart’s partner Ella, the details regarding her previous relationships is still under the covers.

Looking at their loving relationship, the pair seems to be enjoying their life together. As the lesbian couple has already announced that they will be marrying in 2020, many fans are eagerly waiting for that.