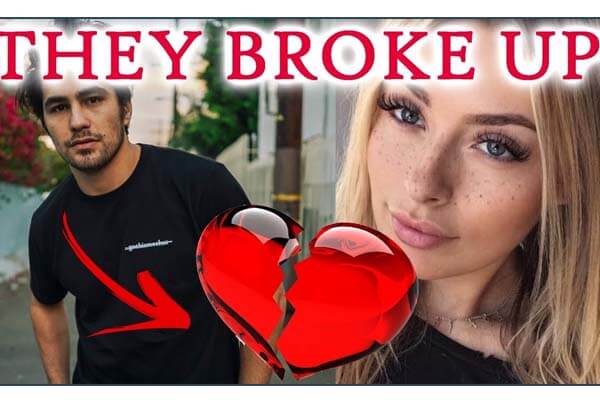 The ex-couple, Toddy Smith and Corrina Kopf broke up with each other in April 2018. Image Source: YouTube.

The relationship between Toddy Smith and Corinna Kopf was always in fluctuation. Despite their breakup, the “Vlog Squad” couple maintains a warm mutual relationship. Indeed, they are an inseparable pair, and fans agree that they should stick together. Even though they are no longer together, Todd and Corinna remain good friends.

After the couple started dating in 2017, their love life had been full of romance as well as occasional drama. Further, the duo reportedly gets along well, even after their break up. The ex-couple of Todd and Corinna are still best friends and support each other.

But their fans remember the exciting times when they were lovebirds. It seems the world wants Todd and Corinna to make up and be a romantic duo one more time.

Looking back at the ex-couple’s romantic relationship, it’s full of romance and drama. As both of them are social media stars with millions of followers, it’s interesting to look at Todd Smith and Corinna Kopf’s relationship through the love angle.

Known by her nickname Pouty Girl, 23-year-old Corinna is an Instagram model and YouTube vlogger. The gorgeous Corinna has been with other partners in the past, and the same goes for her dashing ex-boyfriend, Todd. After two years together, Corinna and the former Vine star, Toddy split in April 2018.

Many were wondering if the two will go back together later. However, Corinna has said that she declined Todd’s proposal to become his girlfriend again. With a broken heart, Todd was sad to see his girlfriend get out of his grip. He might have wanted to get engaged to her and even marry her in the future.

Nevertheless, not all is bad, as Todd is still friends with Corinna, and the two have plans to post a lot of vlogs together. Toddy also thanked her during the Steamy Awards after they had already broken up. Well, things are clearly not so awkward for both of them as they’ ve continued to film together.

What Happened After The Breakup?

After the split between Corrina and Todd, Corinna Kopf’s dated her ex-boyfriend is Turner Tenney aka Tfue, who is a gamer and in Corinna’s words, “the world’s best Fortnite player.” The two former love birds’ love grew after they were the duos in the Fortnite battle royale.

Tenney and Corrina spent only a few months together publicly before breaking up once in the summer of 2019. But later on, they got back together for the rest of the year. However, their relationship came to an end because of difficulties with long-distance relationships. Tfue also tweeted out saying,

sometimes you give someone everything and it’s still not enough

So, gorgeous Corrina Kopf is very much single right now and perhaps does not want to play the field at the moment.

Meanwhile, Toddy Smith dated the gorgeous Olivia O’Brien in 2019. But they probably were not meant to be together. So, Todd and Olivia broke up with each other. The handsome Toddy Smith also looks to not interested in love and relationships. But it’s also not sure if he has a crush on lovely Natalie Mariduena.

happy birthday, natalie. will you be my girlfriend?

Whatever Todd and Natalie have with each other is either friendship or something else. However, it’s confusing to know about Todd’s love life right now. But we do hope he gets the girl of his dreams in the future.