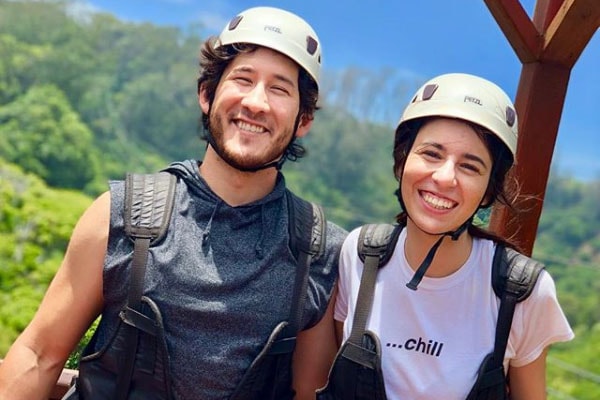 YouTuber Markiplier‘s girlfriend Amy Nelson is a graphic designer, illustrator, and animator from Cincinnati, Ohio. She is quite known as Peebles. Amy began dating Markiplier in 2015 but went public in mid-2016.

Their lovely posts on Instagram proves the fact that the couple is still together and will take their relationship further to the next level. Here are some interesting facts about Markiplier’s girlfriend Amy Nelson.

Amy Nelson was born on the 21st of May, 1994 in Cincinnati, Ohio, USA. She is currently residing in LA, California. Amy is working as an illustrator and graphic designer. Well, Amy must also help her partner Markiplier who has amassed a lot from his career as a YouTuber.

Not many facts are known of Amy besides she is famous for dating famous YouTuber Mark Edward Fischbach aka Markiplier. But collectively reaching out through her various social media sites we have collected the information regarding her lifestyle.

Amy Nelson Is A Travel Freak

If you glance at Markiplier’s Girlfriend Amy Nelson Instagram profile, you’ll instantly know that she is quite a travel freak. She shares her vacation and traveling snaps among her followers. Amy has traveled to many exotic locations including Waiheke Island, Melbourne and many more.

Amy’s traveling contents receives thousands of likes and are well appreciated by the viewers.

Amy Nelson Is An Animal Lover

Alongside being an avid traveler, Amy is also an animal lover. She has been spotted being quite cheerful around animal and plant life.

Besides all of it, Markiplier’s girlfriend Amy own two pets named Henry and Chica. Amy and her boyfriend quite share their positive vibes on social media sites while being near them.

The real hero is Chica though. Henry was placed with us because of her incredibly easy-going attitude. He mimicked her every move for the first few months and without her I don’t know how he would have progressed as far as he has. pic.twitter.com/XZQJHfMN5z

Amy has mentioned her pet Chica, as a big sister to Henry as they both seem happy together.

Amy Nelson is the girlfriend of famous YouTuber Mark Edward Fischbach. The romantic couple is together since 2015. However, Mark and Amy both gave official confirmation in 2016. The pair were spotted together during VidCon 2016.

The loving duo posts their snaps on each other’s social media profile and seems happy together.

Look At YouTuber Adam McIntyre’s Net Worth, Merch, And See If He Has A Girlfriend