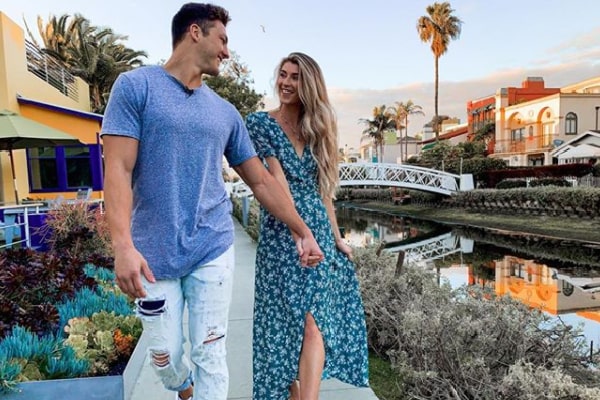 YouTube has become a new thing on the Internet today. Many content creators have come forth with creative content, and several others share their everyday life with the world. Among such bloggers are MMA fighter Josh Brueckner and beauty guru Katie Betzing.

The pair has a massive number of subscribers on their YouTube channel and their social media handle. Thus, let’s know more about the couple who has managed to amass a colossal fanbase via YouTube’s platform. Let’s also look into their achievements and romantic relationship.

Before running a successful vlog with 2 million subscribers, Josh Brueckner was and still is an MMA fighter. Better known as G.I. Josh Brueckner, he is originally from Michigan. He is further associated with the Michigan Top Team gym and has been ranked the 9th of 26 active Michigan Pro Middleweights.

Besides fighting for a living, he also worked as a title boxing instructor and personal trainer. Born on April 11, 1995, the 25-year-old has achieved several things a grown man can only dream of. He proves that dedication and hard works are the keys to achieving goals.

Although famous for his fighting abilities and couple vlogs, he has been making headlines in recent days after suing a supplement company for terminating a promo deal because of the global pandemic.

Professionally known as G.I. Josh, he signed a deal with You Can Beam company, which sells protein and collagen powder. However, the agreement was terminated as Beam CEO Russel Saks claimed to have severe financial distress because of coronavirus after March.

But, the company allegedly continued to display Brucekner’s photo on their website. Hence, he sued them for $90,000, alleging breach of contract, and civil rights violations.

Despite all the negative headlines and life affected by the global pandemic, Brueckner continues to shine as a YouTuber and a fighter. He is not the only driven personality we are shedding light on, though.

Josh Brucekner’s fiancee/ soon-to-be wife, Katie Betzing, is a hardworking and determined person as he is. Let’s let Betzing drop your jaws from here on.

Katie Betzing Was Famous For Her Makeup Tutorial On YouTube

Unlike Josh, Katie Betzing has always been a YouTuber. She has been in the YouTube world since 2012 with all kinds of beauty and hair tips. The YouTube sensation gained a massive following through her youtube videos and her Instagram.

As of now, Katie has amassed 1.3 million subscribers on YouTube and 916k followers on Instagram. She still uploads the same content and has 301 uploads to date. Betzing’s estimated earning from YouTube is $755 – $12.1K per year, and ’20 life hacks every girl should know’ takes the token for her one of the most viewed videos, which has 1.3 million+ views.

However, Josh Brueckner’s girlfriend, Katie, is an entrepreneur as well. She owns Jatie Beauty and co-owns J80 fit with Josh. Both of her initiatives have 443 thousand followers combined.

Besides makeup and tutorial, the gorgeous Katie might knock you with her Michigan state championship with her volleyball team at Romeo High School. Adulting with two sisters and a brother, Katie’s screen presence became irresistible and further inspired cousins and siblings to appear on her YouTube videos.

Going through Katie’s Instagram and vlogs, we might have an impression of knowing her inside out. But do we? Maybe most of her, but let’s move on to how Jatie became a thing.

Crossed Path At A Boxing Gym

It is an indisputable argument that the world works mysteriously, and fate is even more mischievous. Thus, Josh focusing on his fighting career and Katie on her YouTube, the pair happened to cross path at a boxing gym.

Cupid hadn’t just used his arrow but threw a rock at Josh and made them fall head over heels for one another. Emotions are pretty complicated, but the vlogger couple managed to swoop in and merge their world of a fighter and a YouTuber. Hence, Jatie Vlog was introduced to the world.

The pair posts pranks, Q&A, storytime, and all kinds of entertaining videos on their joint channel, which has 2 million subscribers with 700+ uploads by 2020. Josh Brueckner and Katie Betzing’s journey as a couple is shown with insane details, and their die-hard fans felt their intense love.

Although Jatie Vlogs grew remarkably fast, the couple involved were slow and aware of their relationship throughout their journey. Hence, Josh and Katie took time and got engaged after a year and a half of courtship.

Engaged After Dating For A Year & A Half

Having a person you share their life with is a special kind of feeling. On that note, Josh Brueckner was lucky enough to launch his career against Tyler Smith and propose to his girlfriend on the same day making November 10, 2019, a memorable day of his life.

Well, we can still witness their journey, although the fun-couple decided to prank their fans with a ‘hoax break-up’ video. Brueckner and Betzing are excited to spend the rest of their lives together. Not to mention, their fans are as happy to see their journey as themselves. We might even hear more about the couple’s wedding day in 2021 since they are searching for a venue.

Let’s hope the bond remains for as long as they live and entertain their fans honestly.